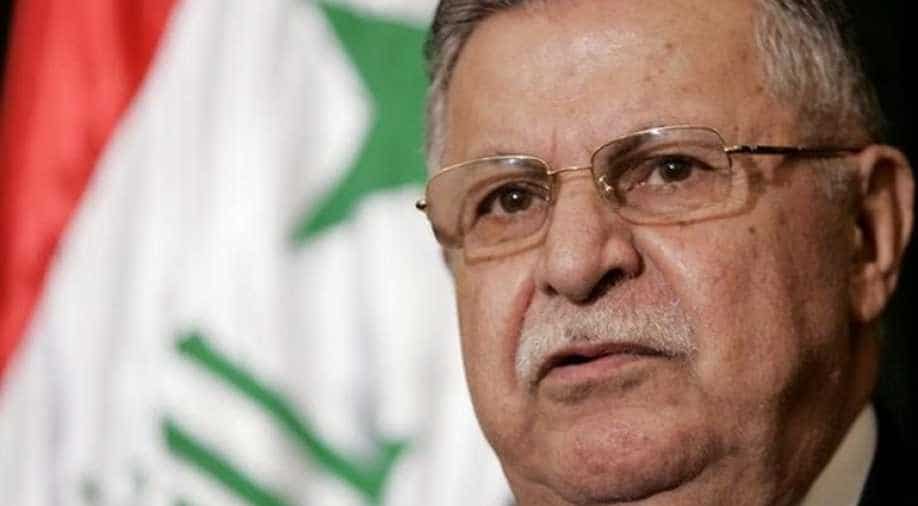 Talabani, a veteran leader of the Kurdish struggle for self-determination, stepped down as president in 2014, after a long period of treatment following a stroke in 2012.

Talabani died in Germany, according to Erbil-based Rudaw TV, which reported earlier in the day that his health had deteriorated. He often went to Germany for medical treatment.

His wife and companion in political struggle, Hero, and his Patriotic Union of Kurdistan (PUK) party voiced only lukewarm support for the September 25 referendum that delivered an overwhelming "yes" to secession from Iraq.

Unlike Kurdistan Regional Government (KRG) leader Massoud Barzani of the rival Kurdish Democratic Party (KDP), the PUK has had traditionally good ties with Iran and Iranian-backed Shi'ite groups which are effectively ruling in Baghdad. The Baghdad government, Iran, and Turkey all strongly opposed the referendum.

Talabani was born near Erbil, now the seat of the autonomous KRG in northern Iraq, in 1933. He lived in Sulaimaniya, a stronghold of his PUK, the main rival of Barzani's KDP.

He was the first non-Arab president of Iraq, elected in 2005, two years after the US-led invasion that toppled dictator Saddam Hussein, a Sunni Arab.

Fuad Masoum, a Kurd from the PUK, replaced Talabani in the Iraqi presidency, a largely ceremonial post in the political system established after Saddam's overthrow that concentrates power in the hand of the prime minister, now Haider al-Abadi, an Arab Shi'ite Muslim.

One of Talabani's sons, Qubad, is the current deputy prime minister of the autonomous Kurdish region in northern Iraq.