Key elements of the US-China trade deal: A pact to pause the economic conflict 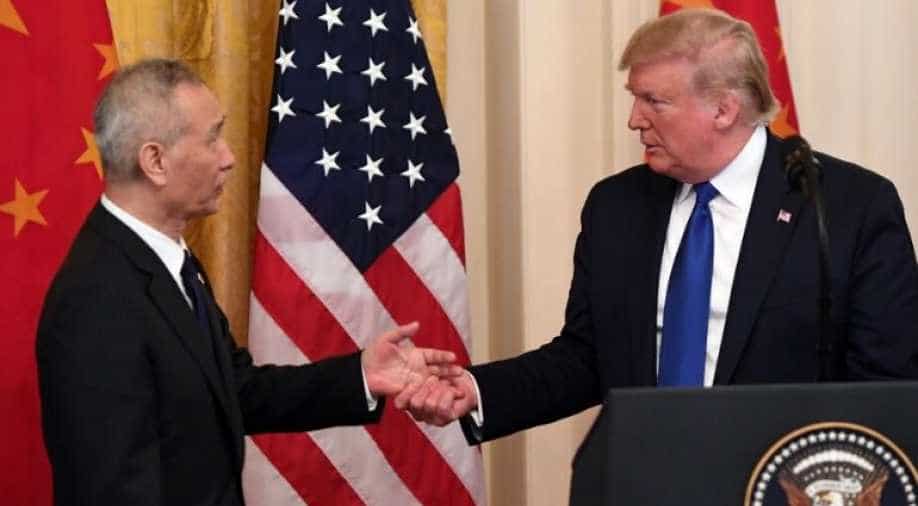 US President Donald Trump, shakes hands during a press conference with China’s Vice Premier Liu He(L), the country’s top trade negotiator, before they sign a trade agreement between the US and China during a ceremony in the East Room of the White House in Washington, DC on January 15, 2020. Photograph:( AFP )

China has agreed to buy $200 billion more in US goods over two years than it did in 2017, before the trade war began.

President Donald Trump signed a long-awaited "phase one" trade deal with China on Wednesday, which includes a massive increase in exports to the Asian economic power.

That includes an additional $32 billion in American farm products and seafood, nearly $78 billion in manufactured goods like aircraft, machinery and steel, and $52 billion in energy products.

The administration was "righting the wrongs of the past", Trump said before the deal signing.

Here are the key elements of the trade deal:

In the understanding, the two sides resolve to submit to the International Monetary Fund's standards on dodging the control of trade rates and state they will work to accomplish advertise decided trade rates and cease from aggressively cutting their estimation of their monetary forms.

China to purchase US goods worth $200 billion over two years

China has consented to purchase $200 billion more in US products for more than two years than it did in 2017, preceding the trade war started.

This incorporates $32 billion in American ranch items and fish, nearly $78 billion in made merchandise like aeroplane, hardware and steel and $52 billion in vitality products.

With respect to whether US homesteads could take care of such goliath orders, Kudlow included that while American creation isn't boundless "we have a lot of ability to open the throttle."

The deal calls for punishment on the robbery of prized formulas and for China to officially boycott digital burglary, the unapproved divulgence of trade secrets and the utilization of taken competitive innovations.

It additionally requires the formation of a system for settling disagreements about medication licenses.

"The definition of criminal offences regarding the theft of IP and related matters is absolutely a crucial ingredient in this," Kudlow said.

There are additional arrangements to forestall forging, including fake drugs, and online copyright encroachment.

US authorities and organizations have since quite a while ago affirmed that China routinely constrained remote organizations to give up technical expertise as a byproduct of consent to work in the huge Asian market.

The understanding marked Wednesday stipulates that neither one of the sides will drive people from the other to move innovation "in connection to acquisitions, joint endeavours, or other venture exchanges."

Under the trade deal, China will make it simpler for US banks to endorse the obligation of Chinese firms and lower obstructions to advertise passage for certain venture administrations.

By April of 2020, China is to permit entirely claimed US organizations to partake in the life, benefits and medical coverage segments.

Smooth execution of the pact between two pacific powers

Under the content of the treaty, the two sides concur that they can officially gripe to one another if either feels the opposite side isn't holding to its finish of the deal.

In the event that they are not settled, grumblings will continuously ascend the hierarchy of leadership to increasingly senior authorities.

In the event that differences are as yet not settled, the grumbling side can stop keeping one of its commitments under the arrangement.

The side accepting the protest must not fight back for such cures on the off chance that it accepts they have been done "in compliance with common decency."

On the off chance that such a measure has been taken in "dishonesty," notwithstanding, "the cure is to pull back from this understanding."