Keep on bullsh...ing, after all it is a post-truth society 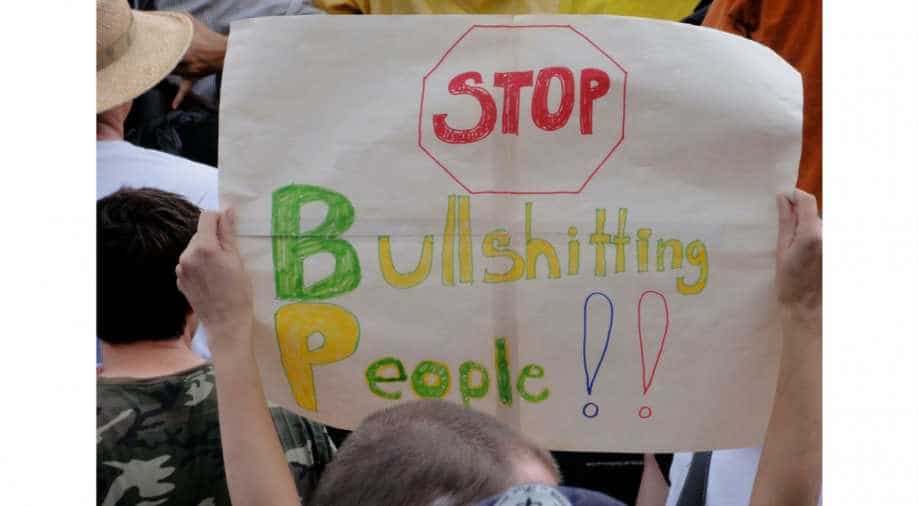 You are free to be a diehard cynic. Do not believe in anything, just keep bullshitting.? Photograph:( WION )

Truth is a vested interest, creating the illusion of a pre-post truth free society. ||Truth is not just dead, you don't want it back.

Listen to these pundits. Apparently, earlier we were living in some kind of a truth-utopia. There was free flow of information based on truth and facts. We were living in a free and democratic society.

Today we are living in a post-truth era where 'technology has disrupted truth' (The Guardian, 12 July 2016). They point to Facebook's newsfeed: any critical counter-facts are expunged and we get only what we want to hear or believe in. You end up living in your self-validating bubble, since counter-facts are filtered out. They call this a 'filter bubble'. Apparently, all of the internet and media, academia and FM radio, are like this today.

How is life in this (filter) bubble? Well, like a rock falling straight down to the bottom of the ocean, you will, without these critical counter-facts, fall straight into the hands, the cold embrace, of dictators and fascists! Welcome to post-truth society!

It is like you are hearing the story as already the collective voice of the nation, not the reportage of that news channel

These days I hear a new addition to this post-truth apparatus: immersive TV. But let us immerse, I say. It won't be an immersion into a beautiful, paradisiacal French 'reverie' - but still. Are you, after knowing about things like the filter bubble, scared to immerse? Are you scared to immerse in a way that you will soon lose sense of what is a fact and what is not? Do you dare? Each story will have an 'impact'. The number of tweets and retweets on the story are flashed in bold even as the story is just reaching you - it is like you are hearing the story as already the collective voice of the nation, not the reportage of that news channel. Hence you better just believe in it, or else you will be left out in the cold!

You better act, and yell, as though you actually believe in it. It is retroactive: since you start acting as though you believe in it, you must actually be believing in it. If you kneel down in church and say your prayers everyday then you must be truly 'believing', you must be a 'believer'. So long as you carry out these ritual practices and karamkand, whether or not you actually 'believe' is a futile question.

Do the stone-pelters in Kashmir actually believe in azadi? What explains the fact that the very next day some of them would be lining up to join the police, the same police whom they are pelting stones at? I mean, as long as you are pelting stones at the right target, that is fine, the pelters are 'genuine'. The thing must be looked at in momentary and ephemeral terms. So long as you are howling against the 'azadi brigade', or calling for the murder of more Pehlu Khans and trolling Gurmehar Kaur - that is good enough. You might be a 'bad Hindu' but so long as you participate in trolling 'Pakistani agents' and tweet your love for the Indian army, you are a votary of 'Hindu rashtra', or of a 'strong India'. After a long day's work, you want to shoot down a few of those 'anti-nationals' because of whom your life is shitty, or miserable, even though you are 'a rich and successful man'!

So does Trump actually believe that Mexicans are rapists? Does he actually believe that Muslims are terrorists? He has a lot of investment in Muslim countries, and he hangs out with very 'peaceful', business-minded filthy-rich Arab sheikhs. Trump is then not lying or misleading when he utters what are factually untrue things - he is just bullshitting, as we know from reading Harry Frankfurt, the writer of the 1986 essay On Bullshit. Just see how Trump another moment can say just the opposite. No fidelity to the lie. Lying means concealing the truth - Trump might simply not 'know' or care about the truth.

There is no prior belief in anything, any kind of fidelity to reality, necessary. This means the kneeling down and saying the prayers is enough: the question of real belief in God is redundant. Such is the teaching of Louis Althusser the French theorist: you do not need to believe in capitalism for capitalism to be able to reproduce itself with your full cooperation. You are free to be a diehard cynic. Do not believe in anything - just keep bullshitting.

So: the pundits have no clue. Life is fun inside the filter bubble. Life is exciting inside the 'troll cesspool' - and busy, as you have to keep repeating the rituals of collective howling, racist abuses, stereotypes, sexual innuendoes, nationalist hyperventilation and so on. This is how the dominant narrative is set - 'narrative' sounds too decent a word here. And this narrative (or hollering) is so set that no amount of counter-facts or 'the truth' can expose it. For, the lying being mostly bullshitting was not based on denial of truth in the first place. Truth is not a casualty, truth is simply not a critical idea here.

Truth is irrelevant. Just as you couldn't defeat Trump with Hillary Clinton, or the BJP with Congress, since they were actually not lesser but perhaps the bigger evil, similarly you cannot counter this post-truth rush to the gutter by resort to truth. Those like Trump and Modi thrive in spite of all kinds of fact-checker media publications, like The Washington Post's fact-checker on Trump's tweets.

Truth is lifeless and asinine in the hands of the so-called progressive media. Truth is a vested interest, creating the illusion of a pre-post truth free society. Truth is not just dead, you don't want it back.