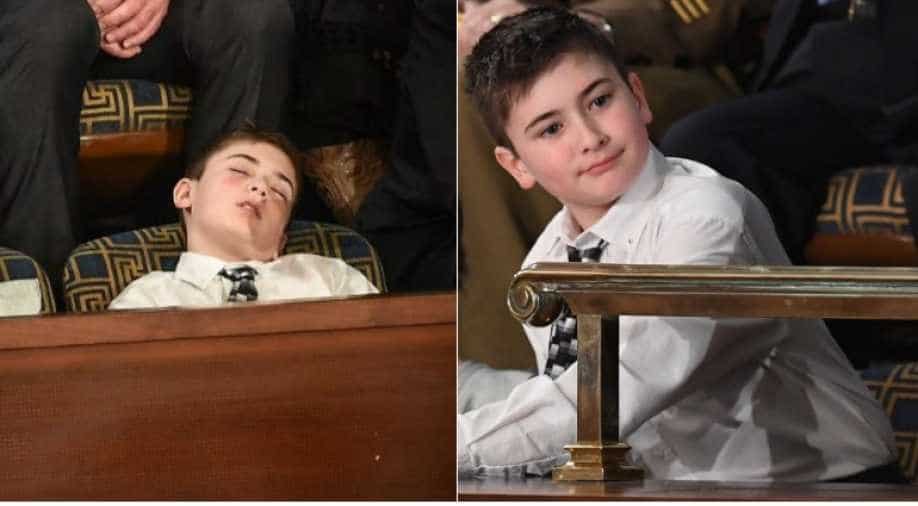 Images of Joshua — who was bullied in school for his surname and had to drop out — taking a nap during Trump's 82-minute speech quickly went viral on Twitter.

Joshua is not related to the Trumps but he has been bullied at school — he was forced to drop out — because of his surname.

The 11-year-old walked into the House of Representatives looking, well, presidential in a white shirt and dark tie — and soon fell off to sleep.

"Joshua Trump is a Trump I can get behind," one user said.

Joshua Trump is a Trump I can get behind. pic.twitter.com/fCO2o7duj7

Joshua had to drop out of school in 2017 because of constant bullying by other students over his surname, after which he told his mother he had lost the will to live.

He was home-schooled for a year and then Joshua's parents decided to change schools where they were instructed by teachers to not use that surname any more.

National fame was never my goal, said the sixth-grader adding that he just wanted to fit in.

"They say are you related to Donald Trump? And I say, 'Would I be here if I'm related to him?" the schoolboy told the news site Inside Edition in December.

Joshua was one of the 13 people to receive special invitations to the address by the president and first lady.

Melania Trump has made her anti-bullying campaign the centrepiece of her legacy as first lady, although there have been few concrete steps aside from public appearances and roundtable discussions.

I would have read my damn briefs: Hillary Clinton on Trump's resistance to intel warnings