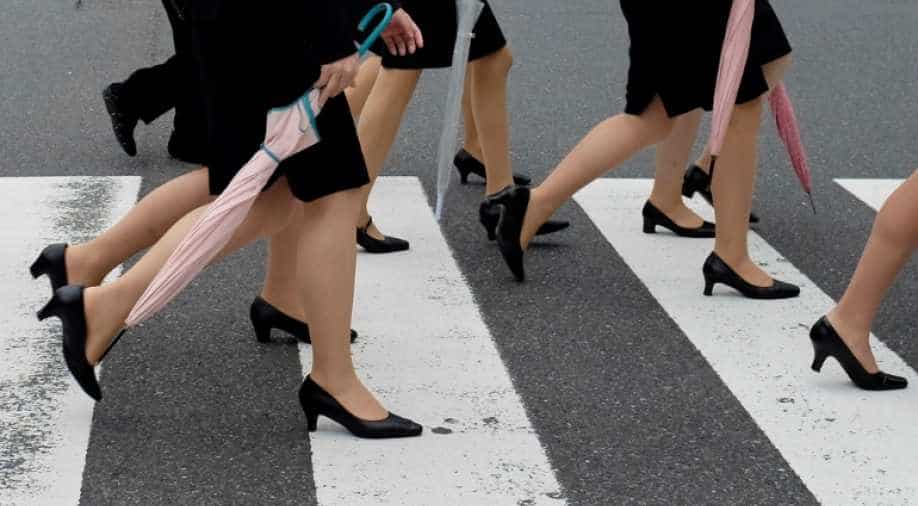 Yumi Ishikawa, a 32-year-old actress and model, involuntarily started the protest movement by tweeting a message in late January about suffering from wearing heels every day, which has received around 100,000 likes or retweets.

A social media campaign against employers forcing women to wear high heels to work has been picking up the pace in Japan, drawing support from tens of thousands of people, including more than 15,000 signatures in an online petition Thursday.

Yumi Ishikawa, a 32-year-old actress and model, involuntarily started the protest movement by tweeting a message in late January about suffering from wearing heels every day, which has received around 100,000 likes or retweets.

“I want to lose the custom that a woman must wear heels and pumps at work someday... Why do I have to work while my feet hurt,” she tweeted.

Following the huge wave of support, she created the hashtag #KuToo - a mixture of "kutsu" (shoe in Japanese) and "kutsuu" (pain), and a play on the universal #MeToo movement.

Many women responded with messages illustrating their own experiences and expressing similar complaints, with some of them even posting pictures of sores on their feet caused by daily use of heels.

Ishikawa then started a petition on Change.org with the aim of getting support against firms differentiating between genders while establishing rules of etiquette for its employees, and ending the custom of women having to wear high heels due to their detrimental impact on health and productivity.

The campaign started a week ago, has received a promising response from the public with more than 15,000 signatures – well on its way to the target of 25,000.

Most companies and public organizations in Japan have a dress code requiring its employees to wear a suit and dark-coloured shoes for men, and skirts and heels for women.

However, a growing number of firms of public entities are relaxing the norms for its employees on grounds of comfort, following initiatives such as those set out by the authorities in Tokyo allowing employees to do away with jackets and ties during the summer and even letting them wear sneakers.

The global #MeToo movement went viral from October 2017 as a hashtag on social media in an attempt to demonstrate the prevalence of sexual assault and harassment, especially in the workplace.