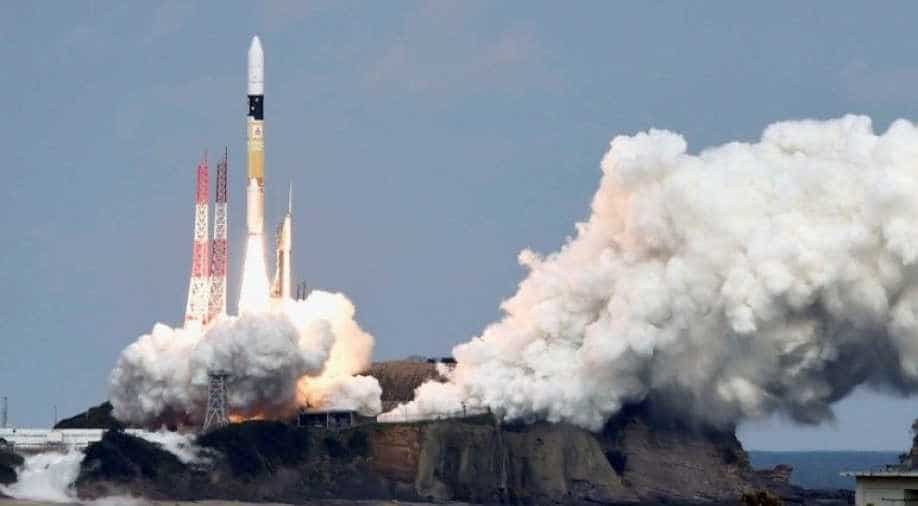 File photo: A H-IIA rocket carrying Hayabusa 2 space probe blasts off from the launching pad at Tanegashima Space Center on the Japanese southwestern island of Tanegashima, in this photo taken by Kyodo December 3, 2014. Photograph:( Reuters )

The Japan Space Exploration Agency (JAXA) reported that at 7:49 local time (22:49 GMT on Thursday) it began to receive data from the probe that confirmed its landing on the asteroid.

Japan's Hayabusa2 spacecraft successfully touched down on the asteroid Ryugu on Friday, which is some 340 million kilometers from Earth, to take samples that could provide clues on the origins of the solar system.

The Japan Space Exploration Agency (JAXA) reported that at 7:49 local time (22:49 GMT on Thursday) it began to receive data from the probe that confirmed its landing on the asteroid.

"Spacecraft state is normal. Based on this, we determined touchdown was successful! A detailed analysis will now be done," JAXA wrote on their Twitter feed, adding "the Doppler data showed the behaviour as expected and cheers went up with a clap!"

The landing took place from an altitude of 20 kilometers, where the probe had been circling the asteroid since last June, and its descend began on Thursday afternoon.

The landing operation was originally scheduled for last October, but was delayed to gather more information about Ryugu first.

Hayabusa2 was launched in December 2014 from the Tanegashima space center, in southwestern Japan, and is scheduled to return to Earth in late 2020.

At the end of June 2018 it arrived at the asteroid and was first located at a height of 20 kilometers, but also went as close at 6 kilometers to conduct the necessary preliminary studies to define the eventual landing site.

If the probe successfully returns to Earth with the samples, valuable clues about the origins of the solar system could be provided, the Japanese aerospace agency said.

The asteroid Ryugu - the name of a magical submarine palace from Japanese folklore - is about 900 meters in diameter and slightly cubic in shape.

Like other minor planets, it is considered to be among the oldest bodies in the solar system and therefore has the potential to provide information on the evolution of the universe.

The Japanese aerospace agency had already undertaken a similar mission, with the Hayabusa1 spacecraft, between 2003 and 2010 to take samples from a different type of asteroid.

That project was successfully completed after several technical problems and delays, including loss of contact with the spacecraft.