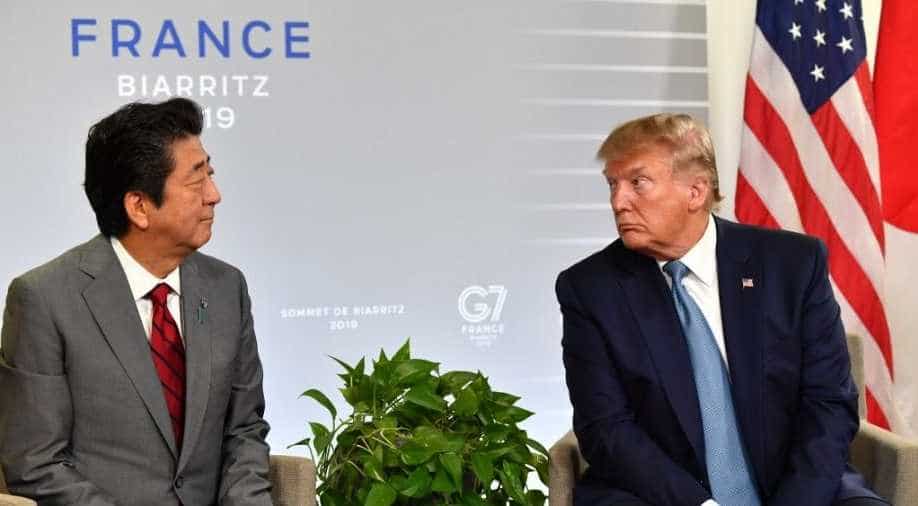 US President Donald Trump with his Japanese counterpart Shinzo Abe. Photograph:(AFP)
Follow Us

Though the United States is Japan's most important ally, Tokyo has fostered economic ties with Iran.

Japan will not join a US-led security mission to protect merchant vessels passing through key Middle Eastern waterways, but will consider deploying its naval force independently, the Yomiuri newspaper reported on Tuesday.

Though the United States is Japan's most important ally, Tokyo has fostered economic ties with Iran, and Japanese firms had been major buyers of Iranian oil until US sanctions forced them to find other suppliers.

Citing unidentified government sources, the Yomiuri said Japan was considering a plan to send its Maritime Self-Defense Force (SDF) on information-gathering missions in the areas around the Strait of Hormuz and Bab al-Mandab shipping lane between Yemen, Djibouti and Eritrea.

It would also consider including the Strait of Hormuz in the SDF's sphere of activity if Iran agrees, the paper said.

Asked about the newspaper report, Japanese Chief Cabinet Secretary Yoshihide Suga declined to mention specific measures that the government was considering to ensure the safety of Japanese vessels.

"As for what kind of steps would be effective to secure the safety of navigation of Japanese ships in the Middle East, we would like to look into the matter from various angles including stable crude oil supply, and Japan's ties with the United States and Iran," Suga told a regular news conference.

"As we investigate the issue, we want to keep our principle of maintaining our diplomatic effort for easing tensions and stabilising the situation in the Middle East."

Iran has denounced US efforts to set up the coalition and says countries in the region can protect waterways and work towards signing a non-aggression pact.

The Japanese government is set to make a final decision, including whether the plan is feasible, after the United Nations General Assembly later this month, the Yomiuri said.

Suga said arrangements are being made for Prime Minister Shinzo Abe to meet with Iranian President Hassan Rouhani on the sidelines of the UN General Assembly later this month.

Global commodity trading has been rocked in recent months by the seizure of a British tanker and a series of attacks on international merchant vessels that the US and Britain have blamed on Iran. Tehran denies involvement.

Britain last month became the first US ally to announce its participation, although most European countries have been reluctant to sign up for fear of adding to tension in the region.