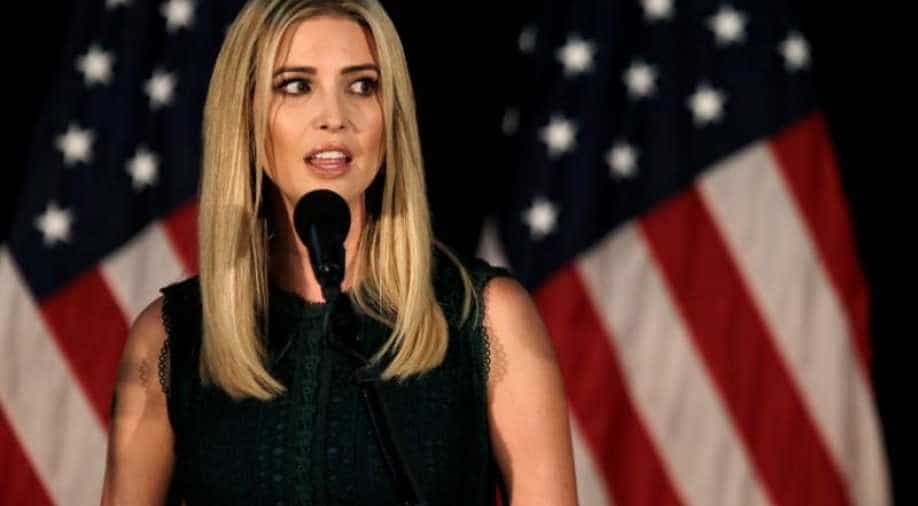 In this file photo, former senior advisor to the president of the United States Ivanka Trump can be seen during an event in Washington Photograph:( Reuters )

Ivanka Trump was one of several aides who tried to persuade the president to call off the violence that ultimately injured more than 150 police officers and sent lawmakers and Vice President Mike Pence fleeing for safety, according to evidence gathered by the committee

Ivanka Trump, former President Donald Trump’s eldest daughter, who served as one of his senior advisers, plans to testify Tuesday before the House committee investigating the Jan. 6 attack on the Capitol, according to a person familiar with the matter.

Ivanka Trump was one of several aides who tried to persuade the president to call off the violence that ultimately injured more than 150 police officers and sent lawmakers and Vice President Mike Pence fleeing for safety, according to evidence gathered by the committee.

The schedule for her testimony, which was reported earlier by NBC, comes days after her husband, Jared Kushner, who was also a top adviser to Donald Trump, sat for an interview and provided what one member of the panel described as “valuable” and “helpful” information.

“There were some things revealed, but we’ll just share that a little later,” Rep. Bennie Thompson, D-Miss., the chairman of the committee, said of Kushner’s testimony.

Ivanka Trump and Kushner are among the highest-ranking Trump White House officials to testify before the committee. The interviews have been closed to the public as the panel conducts its work in secret.

Ivanka Trump’s lawyers have been in talks with the committee since January, when it sent her a letter requesting voluntary testimony. In the letter, dated Jan. 20, the committee said it had heard from Keith Kellogg, a retired lieutenant general who was Pence’s national security adviser. Kellogg had described Donald Trump’s refusal to condemn the violence as the mob engulfed the Capitol, despite White House officials — including Ivanka Trump, at least twice — urging him to do so, the letter said.

Kellogg testified that the president had rejected entreaties from him as well as from Mark Meadows, his chief of staff, and Kayleigh McEnany, the White House press secretary. Kellogg then appealed to Ivanka Trump to intervene.

“She went back in, because Ivanka can be pretty tenacious,” Kellogg testified.

Kellogg also testified that he and Ivanka Trump had witnessed a telephone call in the Oval Office on the morning of Jan. 6 in which Donald Trump pressured Pence to go along with a plan to throw out electoral votes for Joe Biden when Congress met to certify the Electoral College results. The call to Pence was part of an effort to invalidate the 2020 election and give Trump a chance to stay in office.

Kellogg told the committee that the president had accused Pence of not being “tough enough” to overturn the election. Ivanka Trump then said to Kellogg, “Mike Pence is a good man,” Kellogg testified.

The committee has interviewed more than 800 witnesses and plans to interview dozens more. Thompson told reporters on Monday that he had authorized five additional subpoenas that day.

Thompson said the committee had ruled out a subpoena for Pence, citing “significant information” it had received from two of his aides, Marc Short and Greg Jacob.

“There won’t be a subpoena,” Thompson said, adding, “We’ve been able to validate a lot of the statements attributed to President Trump and the vice president without his specific testimony.”

“There’s no effort on the part of the committee to get him to come in,” he said of Pence, adding: “We initially thought it would be important, but at this point we know that people broke in here and wanted to hang him. We know that his security detail had to protect him in an undisclosed location in the Capitol. We know the people who tried to get him to change his mind, about the count and all of that. So what is it we need?”