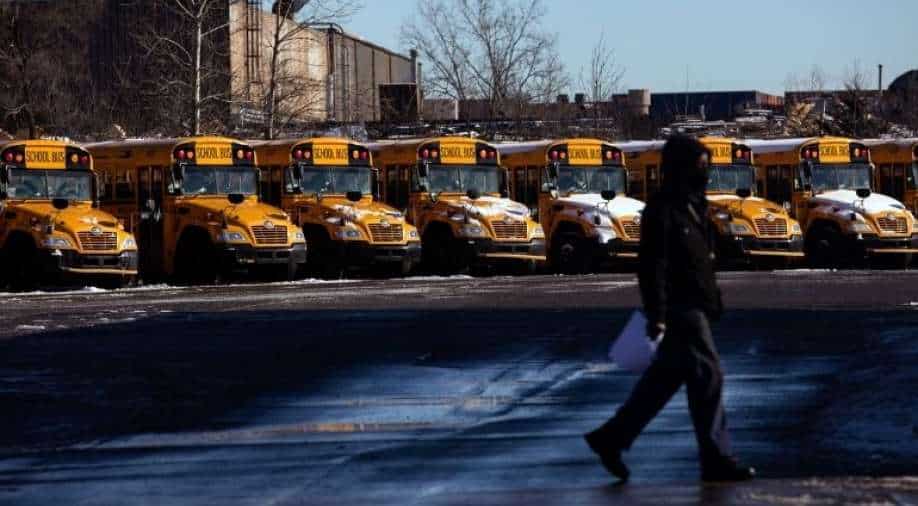 After a holiday break that saw COVID-19 case rates spike unrelentingly, a small but growing list of school districts have returned to remote learning

The omicron surge threatens to upend any sense of peace in the nation’s education system.

After a holiday break that saw COVID-19 cases spike unrelentingly, a small but growing list of districts — including Newark, New Jersey; Atlanta; Milwaukee; and Cleveland — moved temporarily to remote learning for more than 450,000 children.

Districtwide closures, even those that last for a week or two, are a step backward after months in which classrooms largely remained open, even during a fall surge of the delta variant.

And although politicians, including Mayor Eric Adams of New York and Gov. Ron DeSantis of Florida, vowed to keep schools open, there were growing fears from parents and educators that more districts would soon turn to remote learning — even though in-school transmission of COVID-19 has been limited.

Those decisions could, in turn, radiate through the country, affecting child care, employment and any confidence that the pandemic’s viselike grip was loosening.

“It’s chaos,” said Keri Rodrigues, president of the National Parents Union, which has polled families throughout the pandemic. “The No. 1 thing that parents and families are crying out for is stability.”

Some families were given just a few days or even hours of notice about school closures, leading to the all-too-familiar pandemic scramble to adjust child-care arrangements and work schedules. Atlanta Public Schools, for instance, announced Saturday that classes would be online for the first week of January, just days after saying that classes would be held in person.

Rodrigues’ own sons were home Monday morning after their schools, in Somerville, Massachusetts, announced Saturday a two-hour delayed start to test staff and distribute KN95 masks.

The continued burden on parents nationwide is unacceptable, Rodrigues said, given that a winter surge of the virus was predictable and that policymakers had months to secure and distribute tests and masks.

“No grace is extended to us,” she said of parents who would have to go out to work, whether or not their children’s schools were open.

The academic, social and emotional toll of school closures has been enormous, and well-documented. During the first year of the pandemic, before vaccines were available, the question of whether children should be in classrooms was one of the most divisive in American life. Today, politicians, labor leaders and teachers overwhelmingly say they want classrooms to remain open.

A vast majority of the nation’s school districts — including most of the largest ones — appear to be operating relatively normally. Still, the closures this week appeared to be concentrated in regions, such as the Northeast and upper Midwest, where Democratic Party policymakers and teachers unions have taken a more cautious approach to operating schools throughout the pandemic.

The nation is averaging more than 400,000 new cases a day for the first time in the pandemic, though hospitalizations are growing at a much slower rate. Many principals have reported large numbers of staff members calling in sick, because they are infected with COVID-19 or other illnesses, caring for sick family members or fearful of the conditions within school buildings.

Several of the shuttered districts serve predominantly Black, Hispanic and low-income students, raising concerns about the educational gaps that widened during previous phases of the pandemic.

“There is a casualness with which some have approached closing schools that I find deeply concerning, precisely because of the severe harms we’ve seen accumulate over the past year when schools were closed,” said Joseph Allen, a Harvard University professor who studies indoor environmental quality, including in schools.

Still, in New York City, where schools were open, about one-third of the students did not show up, suggesting significant parental hesitation.

And there are signs that some unions are becoming more resistant to in-person teaching. Members of the Chicago Teachers Union are preparing to vote Tuesday on whether to refuse to report to schools starting Wednesday. The union, which has repeatedly clashed with Mayor Lori Lightfoot’s administration, had demanded that every student be tested for the virus before returning from winter break, a step the district did not take.

The district, one of the largest in the country, instead gave tens of thousands of students optional take-home PCR tests before winter break, which parents were supposed to bring to a FedEx drop box.

On Monday, it became clear that the testing effort had largely failed. Of 35,590 tests recorded by the district in the week ending Saturday, 24,843 had invalid results. Among the minority of tests that did produce results, 18% were positive.

A district official said test vendors were looking into the reasons for the inconclusive results.

At a news conference Monday, the union’s vice president, Stacy Davis Gates, expressed her anger at having “to continuously fight for the basic necessities, the basic mitigations.”

In Florida, DeSantis reiterated Monday that officials would not allow the state’s public schools to close, despite a major spike in coronavirus cases.

“You have worse outcomes by closing schools,” said DeSantis, a Republican who has increased his national profile by rejecting coronavirus lockdowns and mandates for much of the pandemic. “Kids need to be in school.”

Furthermore, DeSantis said, children “do not need to be doing any crazy mitigation” such as testing or wearing masks, unless their parents want them to. He added: “Just let them be kids.”

In the New York area, there was a growing divide between the city, where nearly all schools opened Monday morning with beefed-up virus testing protocols, and the surrounding region, where a growing list of smaller districts shifted to remote learning, generally citing the surging number of COVID-19 cases within the community — not specific instances of in-school spread of the virus.

The school board president in Newark, Dawn Haynes, said in a statement, “The lives of all of our students mean more to me than anything else, especially since three of them are actually mine.”

In New Rochelle, New York, the school superintendent, Jonathan P. Raymond, wrote in a Dec. 31 letter that a week of remote learning would allow the district to await a shipment of rapid tests from the state, and sign up more students for in-school surveillance testing.

Some schools announcing their decision to temporarily close cited the closing of other districts — adding to an uneasy sense of falling dominoes. When the superintendent in Mount Vernon, New York, announced a two-week period of remote learning, he pointed to the closure of some schools in Maryland, where, on Dec. 17, Prince George’s County became the first major district to announce an extended shift to virtual teaching.

While omicron is more contagious than previous iterations of the virus, early indications are that it is also less severe. Allen, from Harvard, said the existing recommendations from the Centers for Disease Control and Prevention still allowed schools to operate safely, especially because children were at such low risk of serious complications from COVID-19. Those measures include vaccination, masking, hand-washing, the use of portable air filters and cracking windows.

On Monday, the Food and Drug Administration authorized Pfizer’s vaccine boosters for 12- to 15-year-olds, but child and teenage vaccination rates have been disappointing in many places.

The CDC also recommends a strategy called test to stay, in which close contacts of positive virus cases are given frequent rapid tests; only those who test positive must stay home.

But many schools still lack the number of rapid antigen tests they need.

Allen acknowledged that rapid tests were in short supply.

“We’ve been calling for rapid testing for a year and a half,” he said. “I find it stunning that the country has so failed to prioritize kids.”

Still, many parents said that despite the difficulties of closures, they trusted their children’s schools to make the right call.

Lorenzo Spencer, whose son is a freshman at Cass Technical High School in Detroit, said he was not surprised by the district’s announcement of a three-day closure — without remote learning — to test its 8,000 employees.

“There’s no playbook for what we’re going through,” Spencer said. “As long as they’re doing what they can do to stay safe, I’m all for it.”