It 'would be wise' for Americans to leave Ukraine, says Biden 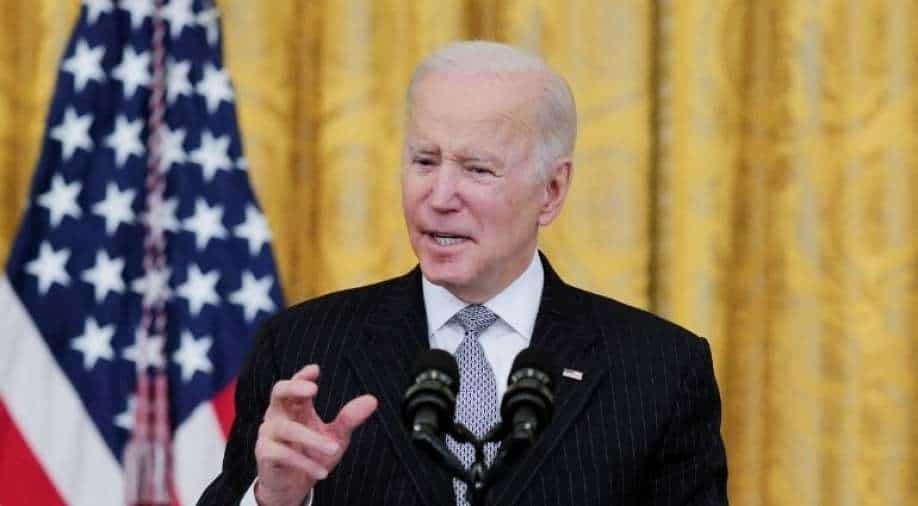 Biden also said on Monday that "there will no longer be Nord Stream 2," a crucial Russia-to-Germany natural gas pipeline, if Russia further invades Ukraine with "tanks and troops." Photograph:( Reuters )

International efforts to defuse the standoff over Ukraine intensified Monday, with French President Emmanuel Macron holding talks in Moscow and German Chancellor Olaf Scholz in Washington to coordinate policies as fears of a Russian invasion mounted.

President Joe Biden said Monday "it would be wise" for Americans other than essential diplomats to leave Ukraine amid the Russian military threat.

Biden made his comments during a joint press conference with German Chancellor Olaf Scholz at the White House, shortly after the two leaders met for talks about the simmering crisis.

The State Department has already authorized nonessential employees to leave and has called on all family members of diplomats in Ukraine to do so.

Biden also said Monday "there will no longer be Nord Stream 2," a crucial Russia-to-Germany natural gas pipeline, if Russia further invades Ukraine with "tanks and troops."

International efforts to defuse the standoff over Ukraine intensified Monday, with French President Emmanuel Macron holding talks in Moscow and German Chancellor Olaf Scholz in Washington to coordinate policies as fears of a Russian invasion mounted.

The buildup of over 100,000 Russian troops near Ukraine has fueled Western worries of a possible offensive. White House national security adviser Jake Sullivan warned Sunday that Russia could invade Ukraine "any day," triggering a conflict that would come at an "enormous human cost."

Russia has denied any plans to attack its neighbour but demands that the U.S. And its allies bar Ukraine and other former Soviet nations from joining NATO, halt weapons deployments there and roll back NATO forces from Eastern Europe. Washington and NATO reject those demands.

Speaking at the start of his meeting with Scholz, U.S. President Joe Biden said that the U.S. And Germany were "working in lockstep to further deter Russian aggression in Europe."

Scholz added: "We are closest allies and we are working intensely together, and this is necessary for doing the steps that we have to do, for instance, fighting against Russian aggression against Ukraine."

Macron, meanwhile, called for de-escalation as he began talks with President Vladimir Putin in the Kremlin. "Dialogue is necessary because that's the only thing that will help, in my views, to build a context of a security and stability on the European continent," Macron said, adding that he's ready to "start building an effective response."

Putin, in turn, praised France's role in shaping European security, saying he appreciates Macron's efforts to help ensure "an equal security in Europe" and broker a settlement to the Ukrainian crisis. "I realize that we share concern about what's going on in Europe in the security sphere," the Russian leader said as he faced Macron across a long table.

Macron and Putin then met for hours of one-on-one talks and a meal that included fish soup, the choice of sturgeon or reindeer with sweet potatoes and pear pie with vanilla ice cream.

Macron, who heads Tuesday to Ukraine, spoke by phone Sunday with Biden. Before the Putin meeting, Macron said: "I don't believe in spontaneous miracles."

"The security and sovereignty of Ukraine or any other European state cannot be a subject for compromise, while it is also legitimate for Russia to pose the question of its own security," Macron told the French newspaper Journal du Dimanche, adding he believes "the geopolitical objective of Russia today is clearly not Ukraine, but to clarify the rules of cohabitation with NATO and the EU."

Kremlin spokesman Dmitry Peskov sought to temper expectations, saying "the situation is too complex to expect a decisive breakthrough after just one meeting," and noting the West has ignored Moscow's security demands.

Before meeting Biden, Scholz told German media that "there will be a very high price if Ukraine is attacked militarily. And we are preparing for this very precisely and have been talking about the details for a long time.? Scholz will travel to Kyiv and Moscow Feb. 14-15.

Ahead of the visit, the White House sought to play down Germany's refusal to supply lethal weapons to Ukraine, bolster its troops in Eastern Europe or spell out which sanctions it would support against Russia ? a cautious stand that has drawn criticism abroad and inside Germany.

White House press secretary Jen Psaki on Monday again pushed back against criticism of Germany that it's not doing enough to support Ukraine.

Psaki also reiterated that the Nord Stream 2 Russian gas pipeline to Germany "will not move forward" should Russia further invade Ukraine. But she sidestepped questions about whether the Germans have given the White House assurances that it would shut off the pipeline that has been completed and is currently awaiting certification by German and EU regulators.

Separately German Defense Minister Christine Lambrecht said her country would add up to 350 troops within a few days to about 500 already a part of a NATO battlegroup in Lithuania. "With this, we are strengthening our contribution to forces on NATO's eastern flank and sending a very clear signal of unity to our allies," she said.

Biden already has deployed additional U.S. Troops to Poland, Romania and Germany, and a few dozen elite U.S troops and equipment landed Sunday in southeastern Poland near the border with Ukraine, with hundreds more infantry troops of the 82nd Airborne Division set to arrive.