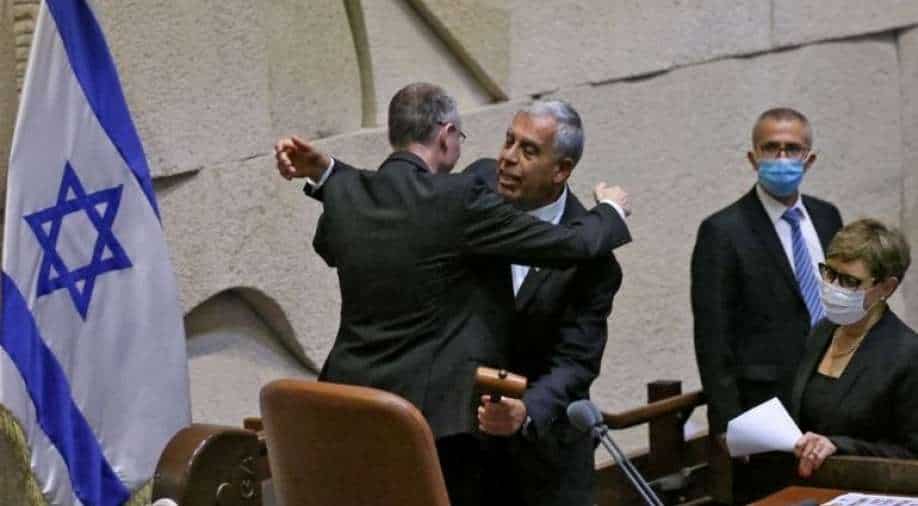 (L to R) Israel's outgoing Knesset speaker Yariv Levin (Likud) embraces his successor Mickey Levy (Yesh Atid) after being voted in, during a special session to vote on a new government at the Knesset in Jerusalem, on June 13, 2021. Photograph:( AFP )

Between 2013 and 2014, Mickey Levy was the Deputy Minister of Finance.He was a police officer before entering politics.

Mickey Levy of the centrist Yesh Atid, the party led by coalition architect Yair Lapid, was on Sunday elected as the speaker of the 120-seat legislative body.

Levy, a legislator from Yair Lapid's centrist Yesh Atid party, has been voted as the new speaker of Israel's parliament on Sunday.

He received 67 votes and his rival, Shas lawmaker Yaakov Margi, got 52 votes.

Between 2013 and 2014, Mickey Levy was the Deputy Minister of Finance.

He was a police officer before entering politics.

Levy was born in Jerusalem, but his parents are from Cizire, Turkey, a Kurdish town.

In an old interview, Levy had stated that he is proud to be a Kurd and that his family arrived in what is now Israel long before Saladin Ayubi, the famed Muslim Kurdish commander.

According to his biography on the Parliament website, he also worked as a police attaché at the Israeli Embassy in Washington and then owned a bus company.