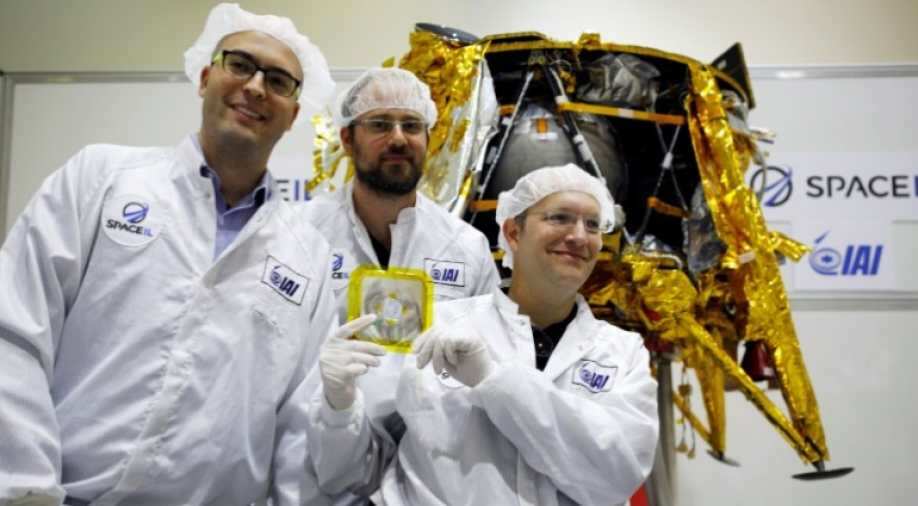 Members of Israeli non-profit group SpaceIL and representatives from Israel Aerospace Industries hold up a time capsule next to the spacecraft that will fly unmanned to the moon unmanned in early 2019. Photograph:( Reuters )

A time capsule of three digital was ceremoniously placed within the space pod by organisers wearing white dust coats. The discs contain thousands of files included drawings by children, pictures of Israeli symbols like the flag, Israeli songs and a booklet written by a Jewish man of his personal account of the Holocaust.

Israeli scientists making final preparations to launch the country's first spacecraft to the moon added a special passenger on Monday that will accompany the journey.

A time capsule of three digital discs containing thousands of files was ceremoniously placed within the space pod by organisers wearing white dust coats at the plant where it is being constructed and tested.

They included drawings by children, pictures of Israeli symbols like the flag, Israeli songs and a booklet written by a Jewish man of his personal account of the Holocaust.

One of the founders of the nonprofit organisation behind the launch, SpaceIL, compared the time capsule to prayers written on bits of paper that worshippers stuff into Jerusalem's Western Wall, one of Judaism's holiest sites.

"Today we are putting all those dreams on the spaceship like you would take a note and put it in the Kotel, wishing for a bright future," said Yonatan Winetraub, using the Hebrew word for the Western Wall.

The spacecraft weighing some 585 kilogrammes (1,300 pounds) is expected to be launched in the coming months, though a precise date has not been set. Organisers are hoping for February.

It will be sent via a Falcon 9 rocket from American entrepreneur Elon Musk's SpaceX firm and will take around a month and a half to arrive.

The launch will be from Cape Canaveral in the United States.

The cost of the project is some $95 million (84 million euros), with private philanthropists providing funding. SpaceIL has also partnered with state-owned Israel Aerospace Industries, among the country's largest defence firms.

It is called Beresheet, or Genesis in Hebrew, a name chosen by the public, and resembles a tall, oddly shaped table with round fuel tanks under the top.

It will measure the magnetic field as part of efforts to investigate how the moon was formed. The data will be shared with US space agency NASA.

"I've seen hundreds of kids look at the spacecraft and you see in their eyes that they say, 'Wow, if a small country can do this maybe little old me can do almost anything'," said Opher Doron, general manager of IAI's space division.

The project began as part of the Google Lunar XPrize, which in 2010 offered $30 million in awards to encourage scientists and entrepreneurs to come up with relatively low-cost moon missions.

Although the Google prize expired in March without a winner having reached the moon, Israel's team pledged to push forward.

Asked whether the project had so far gone as planned, SpaceIL co-founder Yariv Bash said "hell no".

"Back when we got started, we thought it was going to be a two-year project, the budget would be less than $10 million, and the spacecraft will weigh less than five kilogrammes," he said.

"And here we are eight years later with a project with a budget of almost $100 million."