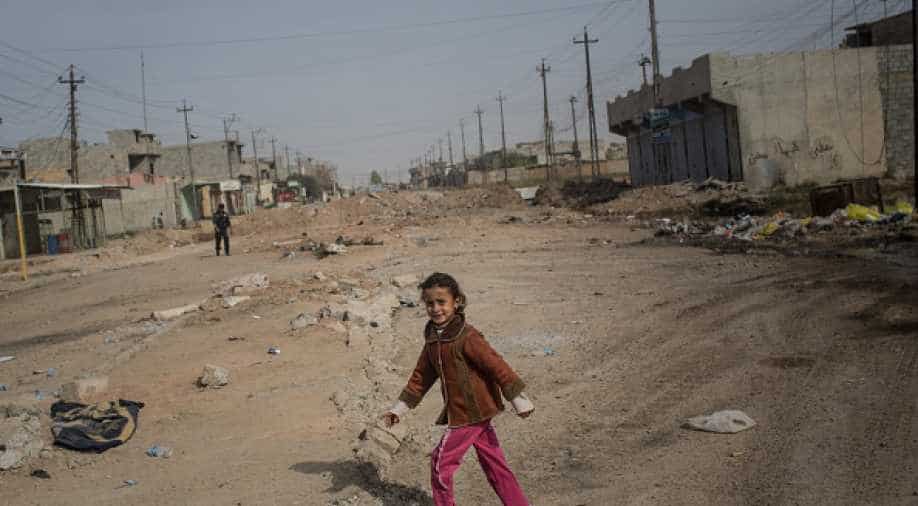 Islamic State has threatened to attack civilians who were unwilling to retreat from the city along with jihadists. In photo: A young girl walks across a street just behind the frontline in the Entisar neighborhood. Photograph:( Getty )

The Islamic State group is "indiscriminately" attacking civilians who refused to retreat along with the jihadists in the Iraqi city of Mosul, Human Rights Watch said on Wednesday.

Iraqi forces launched a massive operation to retake the last IS-held city in Iraq more than two months ago, and have pushed the jihadists out of several neighbourhoods on Mosul's eastern side.

"Fighters with the Islamic State (also known as ISIS) have indiscriminately attacked civilian areas in eastern Mosul with mortar rounds and explosives, and deliberately shot at fleeing residents," HRW said.

"Residents said ISIS members told them in person, by radio, and over mosque loudspeakers that those who stayed behind were 'unbelievers' and therefore valid targets along with the Iraqi and coalition forces," the rights group said.

But Iraqi and US-led coalition forces seeking to oust IS from Mosul are also responsible for endangering civilians, HRW said.

Some IS attacks occurred in places "where Iraqi military forces had positioned soldiers inside homes or on residential rooftops in densely populated areas," it said.

And five witnesses described three separate strikes carried out by either Iraq or the coalition that targeted IS fighters but also killed civilians, HRW said.

IS overran large areas north and west of Baghdad beginning in June 2014, but Iraqi forces backed by the US-led coalition and Iran have since regained much of the territory they had lost.