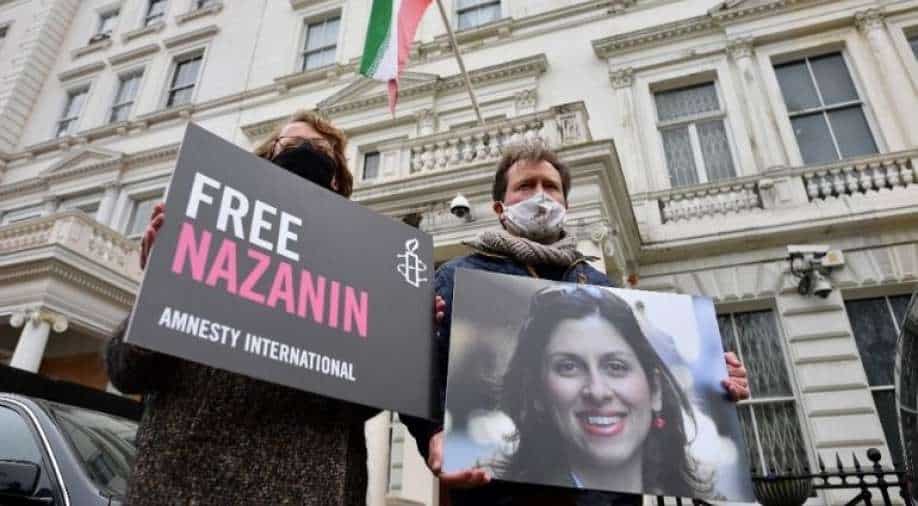 Richard Ratcliffe (R), husband of British-Iranian aid worker Nazanin Zaghari-Ratcliffe jailed in Tehran since 2016, holds a picture of his wife as he protests outside of the Iranian Embassy in London on March 8, 2021. Photograph:( AFP )

Nazanin Zaghari-Ratcliffe is a 43-year-old British-Iranian woman who has been detained in Iran for five years.

The British government has said that Iran's treatment of detained dual national Nazanin Zaghari-Ratcliffe amounts to "torture" as Iran sentences her to a further two years.

"I think it amounts to torture the way she's being treated, and there is a very clear, unequivocal obligation on the Iranians to release her," Foreign Secretary Dominic Raab told BBC television.

Nazanin Zaghari-Ratcliffe is a 43-year-old British-Iranian woman who has been detained in Iran for five years.

Her husband Richard Ratcliffe argues she is being held hostage as part of a diplomatic stratagem.

Richard Ratcliffe has linked his wife's plight to a British debt dating back more than 40 years for army tanks paid for by the shah of Iran.

When the shah was ousted in the 1979 revolution, Britain refused to deliver the tanks to the new Islamic republic.

The Iranian regime claims that the 42-year-old was working against the state when she was arrested on a visit to the country to see her parents with her daughter in April 2016.