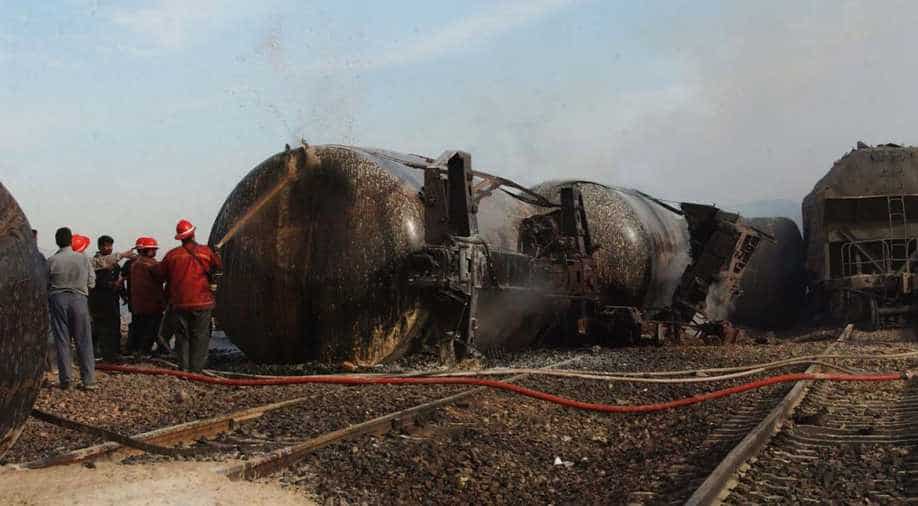 The injured were airlifted to hospitals in Semnan and Damghan. (Representative image) Photograph:( Getty )

A train collision in northern Iran killed 44 people and injured dozens more in one of the country's worst rail disasters.

The cause of the accident was determined to be human error.

A passenger train smashed into the back of a stationary express train at 7:50 am (0420 GMT), causing two coaches in the express train to catch fire.

The express train operating from Tabriz in the northwest to Mashhad had stopped, Khabbaz said. Initially, mechanial failure or extreme cold was thought to be the cause.

The front four coaches of the second train derailed and overturned.

"One minute I was sleeping and the next I was being carried out of a coach on fire," one hospitalised passenger told state television, AFP reported.

Head of Iran's emergency services Hossein Kulivand said on late Friday that 82 had been hospitalised, of whom 17 were treated for light injuries and released.

"For some unknown reasons due to human fault, the train (from Semnan) was ordered to move and so it hit the other train from behind," said Mohsen Poor-Seyed Aghaie, the head of Iranian railways, reported AFP.

The injured were airlifted to hospitals in Semnan and Damghan because of the remote location of the crash site, said Hassan Shokrollahi, province's Red Crescent director.

"Due to the difficulty of access, only our helicopter has managed to reach the scene," he said.

.President Hassan Rouhani called for "all technical, administrative and preventive measures to be taken to prevent the recurrence of such an accident".

The Tehran-to-Mashhad line was briefly closed to allow an investigation into the cause of the crash, said Sadegh Sokri, spokesman for Iran's railways.

In June 2014, two people were killed and 30 injured in a collision on the same line between a freight train and a passenger train.

Iran's roads are notoriously deadly, mainly because drivers show scant regard for rules, with 16,000 lives lost in the Iranian year between March 2015 and March 2016, AFP said.