Indoor dining in NYC and New Jersey can go to 50% march 19, governors say 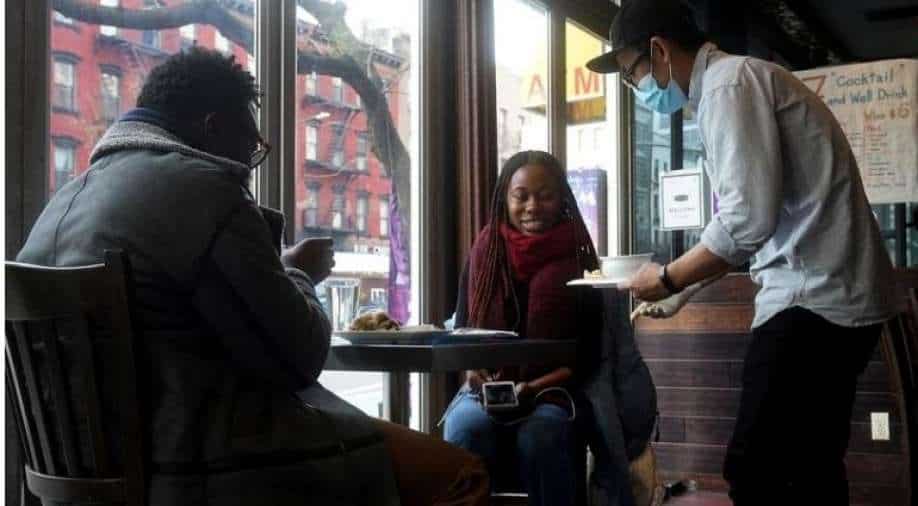 Restaurants in New York City and New Jersey will be able to increase indoor dining to 50% of capacity starting March 19, the governors of New York and New Jersey said Wednesday.

The announcement of the relaxed limits comes as New York and New Jersey continue to lead the nation in new coronavirus cases. The states are both reporting a seven-day average of 37 new virus cases a day for every 100,000 residents, according to a New York Times database.

The change — which will take effect two days after St. Patrick’s Day, traditionally a busy day for restaurants and bars — will bring both places into line with dining limits in Connecticut and Pennsylvania.

Gov. Andrew Cuomo said that his decision to expand dining in New York City was made “in partnership” with New Jersey Gov. Phil Murphy, a fellow Democrat.

“We will continue to follow the science and react accordingly,” Cuomo said in a news release issued by both governors.

Cuomo had already announced that capacity limits for restaurants statewide outside New York City could expand March 19 to 75%, from 50%.

Also read | A governor in isolation: How Andrew Cuomo lost his grip on New York

The new half-capacity limit in New Jersey will also apply to casinos, salons and gyms. In addition, the maximum number of people permitted at private indoor gatherings in New Jersey is increasing to 25 people from 10. Outdoor gatherings can include 50 people, up from 25.

“We believe that when all factors are weighed, we can make this expansion without leading to undue further stress on our health care system,” Murphy said.

New Jersey was one of the last states to permit indoor dining to restart, and Murphy has faced pressure to expand capacity limits.

In New York City, restaurants have been operating with limited indoor capacity for months, including a shutdown from December to February when cases started to rise again. Restaurants are allowed to serve diners inside at 35% capacity, up from 25% a few weeks ago.

“While city restaurants may not increase occupancy to 75%, like restaurants are safely doing throughout the rest of the state,” Andrew Rigie, the group’s executive director, said Wednesday, being able to go to 50% capacity in the city “is still welcome news to the battered restaurant industry.”

After the announcement Wednesday, employees at Pizza Moto, a pizzeria between Carroll Gardens and Red Hook in Brooklyn, gathered to discuss what it would mean for the restaurant. Pizza Moto opened for indoor dining for just a few weeks late last year before the shutdown in December.

Joe Blissen, the restaurant’s general manager, said that he believed Pizza Moto could safely restart indoor dining at 50% capacity because most of the staff would have received their second vaccines by March 19.

“We are just trying to be cautious to make sure everything is nice, clean and safe,” said Blissen, who got his second shot this week. “It’s reassuring to us that at least our staff will be safe.”

Chris Labropoulos, who works at the Buccaneer Diner in East Elmhurst, Queens, said that an increase to 50% would have little impact, because few people choose to dine indoors there. He could not recall the last time the diner, which opened in 1976, had reached maximum capacity under the state’s pandemic guidelines.

“A lot of people don’t come in as it is,” Labropoulos said, adding that most orders are for delivery or pickup.

In New Jersey, Murphy last eased restrictions on indoor dining before the Super Bowl, when he raised the limit to 35% and ended a 10 p.m. curfew.

Diners must continue to wear masks when not seated at tables, and seating at bars in New Jersey remains prohibited.

“Unlike some states, which are prioritizing, frankly, flat-out politics over public health — Texas and Mississippi come to mind — our mask mandate remains in place,” Murphy said.

Texas’ mask mandate ended Wednesday. Mississippi eliminated its mask rules a week ago over objections from federal health officials, who warned the step was premature.

Over the past week, there were an average of 3,322 new cases of the virus reported each day in New Jersey and 7,177 in New York, fueled in part by the spread of virus variants.

Researchers with the Centers for Disease Control and Prevention released a study Friday that found that counties opening restaurants for on-premises dining — indoors or outdoors — saw a rise in daily infections about six weeks later, and an increase in COVID-19 death rates about two months later.

The study does not prove cause and effect, but the findings square with other research showing that masks prevent infection and that indoor spaces foster the spread of the virus through aerosols, tiny respiratory particles that linger in the air.