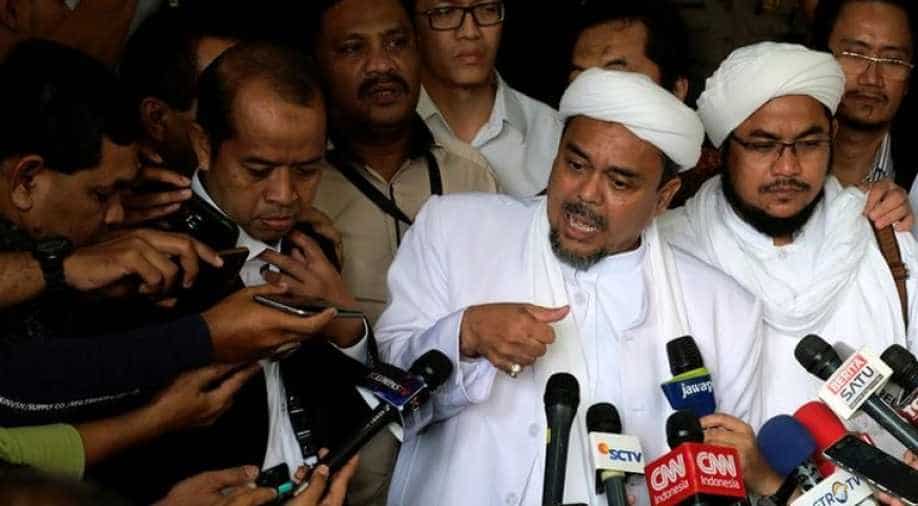 Rizieq is accused of violating Indonesia's strict anti-pornography laws by exchanging graphic messages and nude pictures with a woman||Religious and political tensions have soared lately with Islamist-led rallies targeting the former governor, a Christian, jailed this month for insulting the Koran

Indonesian police on Monday named an Islamist leader as a suspect in the exchange of pornographic messages and photos, a new legal threat to a cleric who helped organise mass Muslim rallies against Jakarta's former Christian governor.

Habib Rizieq, a firebrand cleric who heads the hardline Islamic Defenders Forum (FPI), has also been made a suspect in a separate investigation over allegations he insulted the secular state ideology in the Muslim-majority nation.

President Joko Widodo appears to be taking a tougher stance against fundamentalism and has said he would not tolerate any individuals or organisations that undermine the secular state ideology "Pancasila", or threaten Indonesia's tradition of pluralism.

Religious and political tensions have soared in the last six months with Islamist-led rallies targeting the Jakarta governor, Basuki Tjahaja Purnama, an ethnic Chinese Christian who was jailed this month for insulting the Koran.

The government recently moved to disband Hizb ut-Tahrir, an Islamist group that calls for a state based on sharia and also backed the protests against Purnama, an ally of Widodo.

Jakarta police spokesman Argo Yuwono confirmed Rizieq had been made a suspect, meaning the case is likely to go to court.

"The main crime is participating in and transmitting pornographic content," Yuwono said in a telephone text message.

Rizieq's lawyer, Sugitmo Atmo Pawiro, denied the allegations, saying they had been fabricated by supporters of Purnama.

Rizieq is currently overseas after flying to Malaysia and then to Saudi Arabia. He has not returned to Indonesia despite repeated summons for questioning by police. His lawyer denied that the cleric had fled Indonesia because of his legal troubles.

An FPI spokesman said the legal complaints against Rizieq were "unfounded".

"This has all been engineered to criminalise the clerics," said Novel Bamukmin, head of the FPI's Jakarta chapter. "The police need to investigate who really produced and distributed that transcript," he said.

Rizieq served prison terms in 2003 and 2008 for violence and disrupting public order.