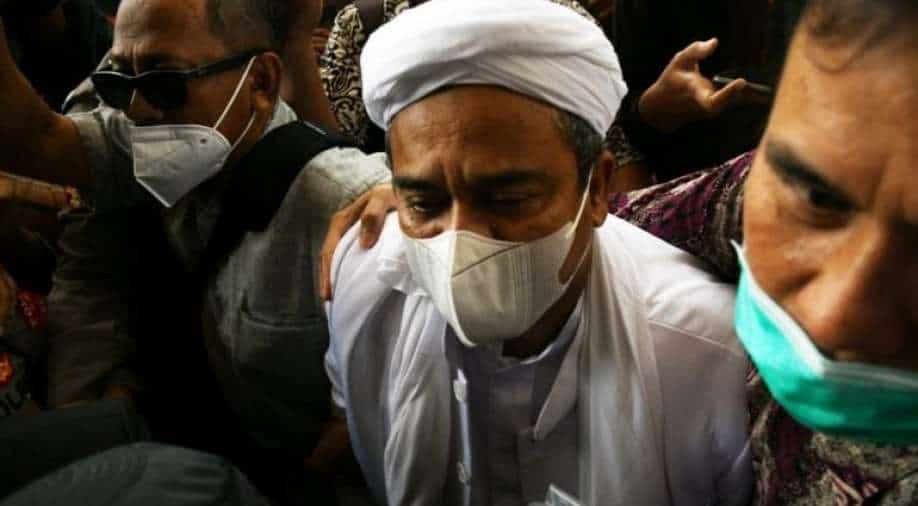 Shihab was also fined 20 million rupiah ($1,400). But his jail sentence would be reduced to three months to account for time already served, the court said

A firebrand Indonesian cleric was jailed Thursday for holding sermons and other gatherings that drew tens of thousands of followers, breaking virus restrictions in the world's biggest Muslim-majority nation.

The eight-month prison term handed to Rizieq Shihab comes several months after Indonesia outlawed his influential hardline Islamic Defenders Front (FPI) in the aftermath of a deadly shootout between police and his followers.

On Thursday, East Jakarta District Court jailed Shihab for urging supporters to attend sermons, a celebration of the Prophet Mohammed's birthday, and his daughter's wedding. All drew huge crowds in a country hard hit by the pandemic.

Also read | Three quarters of new Covid infections in UK due to B.1.617.2 'variant of concern': Health minister

Shihab was also fined 20 million rupiah ($1,400). But his jail sentence would be reduced to three months to account for time already served, the court said.

Five other senior FPI members each got eight-month jail terms for organising the mass gatherings.

About 2,300 security personnel were deployed around the courthouse to keep Shihab supporters at a distance, with nearly two dozen briefly detained, local media reported.

Shihab — who has served jail time in the past, including for an attack by FPI members on an interfaith gathering in 2008 — denied the latest charges and said he may appeal.

His December arrest came as Jakarta police shot dead six FPI followers in a highway gun battle that authorities described as an act of self-defence — a claim disputed by the group.

The charismatic Islamic leader fled to Saudi Arabia shortly after police named him as a suspect in a pornography case in 2017, and he remained in self-imposed exile for three years. Those charges have been dropped.

When he returned to Indonesia in November, Shihab was welcomed by tens of thousands of followers at Jakarta airport, in violation of a Covid-19 ban on gatherings.

Shihab's FPI was notorious for targeting nightclubs and other establishments it deemed "immoral", and has also attacked minority Muslim sects it considers "deviant".

The cleric was among the main figures behind mass rallies in 2016 against the then governor of Jakarta, Basuki Tjahaja Purnama, over allegations that he insulted the Koran.

Basuki, who is Christian, was sentenced to two years in prison for blasphemy.