In tears and shock, Poland bids farewell to murdered mayor 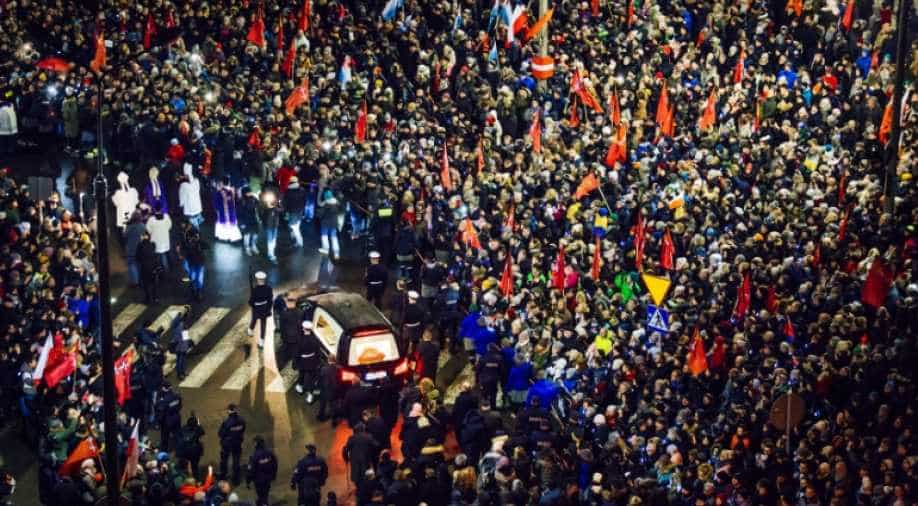 People take part in procession following the coffin of Pawel Adamowicz, Gdansk mayor who died after being stabbed at a charity event, in front of the European Solidarity Centre in Gdansk, Poland. Photograph:( AFP )

Around 3,500 people attended the ceremony at St Mary's Church, one of the largest brick churches in the world, where his casket will be permanently located.

Poles gathered on Saturday in the Baltic port city of Gdansk to bid an emotional farewell to murdered liberal mayor Pawel Adamowicz, whose public stabbing has raised questions about hate speech in politics in the country.

Around 3,500 people, including President Andrzej Duda and EU Council President Donald Tusk, a longtime friend of Adamowicz, attended the ceremony at St Mary's Church, one of the largest brick churches in the world, where his casket will be permanently located.

Polish Nobel Peace laureate Lech Walesa also attended the ceremony, being held on what Duda has declared a day of national mourning.

Adamowicz, 53, was stabbed in the heart in front of hundreds of people at a charity fundraiser last weekend by an ex-convict wielding a knife.

"It's a sad day for the people of Gdansk. We feel we have lost a father," said Tomasz Ceglinski.

"I am 24 years old and he was in power for all of my life," he said. "Every year, we saw changes in the city: investments, new roads, shopping centres and cultural institutions all thanks to him. It's my duty to be here," he told AFP.

The mayor's 27-year-old attacker, who reportedly has a history of mental illness, had previously been sentenced to more than five years in jail for armed robbery.

Recently released, the man claimed he was wrongly imprisoned by the previous government -- led by the centrist Civic Platform (PO) party, to which Adamowicz once belonged.

For many Poles, the mayor's murder was fuelled by online hate speech and toxic divisions between the main political parties.

"A well-organised, crazy hatred directed at a man who with the help of thousands of Gdansk residents was building this great, proud and free city," he added.

Politicians from PO and the ruling conservative Law and Justice (PiS) party have traded barbs for years, as have their supporters online, with critics accusing the government of tacitly condoning the atmosphere of hostility.

Numerous media outlets have compared Adamowicz's murder to the 1922 assassination of president Gabriel Narutowicz by a fanatical nationalist at a time of rampant hatred.

Since Adamowicz's death, police have detained several individuals for uttering or writing threats against other politicians.

Scores of mayors from across Poland and abroad attended the funeral. Giant screens around the church allowed city residents to watch the funeral.

Tens of thousands of people have already queued for hours to see the late mayor's casket, covered in white flowers and the city's red flag, and to sign a book of condolence at the city's European Solidarity Centre.

Gdansk, a city of around half a million people, was the cradle of Poland's anti-communist Solidarity movement in the 1980s.

Adamowicz, mayor of Gdansk for two decades, was backed by the PO party in 2018 municipal polls and won re-election with 64 per cent of the vote.

The capital Warsaw has named Adamowicz an honorary citizen.

The attack on Adamowicz is unusual as political violence is rare in Poland.

The last attack on a political figure was in 2010 when a man fatally shot an aide at a regional PiS office before stabbing another employee, who survived.