In 'no deal' Brexit, I would leave EU with a heavy heart: Jeremy Hunt 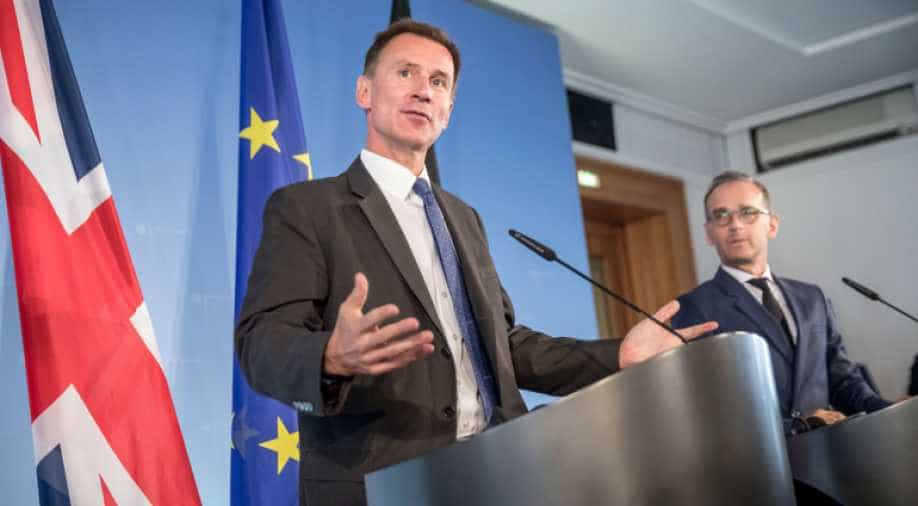 Hunt was quick to point out during the interview that if the Brexit moves were not carried out properly then Britain could "trip into a general election, Jeremy Corbyn will become prime minister and then we'll have no Brexit at all."

Conservative candidate Jeremy Hunt,52, who is running for the prime minister's post against fellow partyman Boris Johnson said today that he would accept a "no deal" Brexit with a heavy heart as it would impact jobs, businesses and will be a risk to unions.

During an interview with a British television channel, Hunt who finished second in the Conservative party ballot for prime ministership, ahead of his much hyped final clash with Johonson next month, said: "I would say I've been very clear I would leave the European Union if no deal was on the table and there was no prospect of a better deal that could get through Parliament. I would do it with a heavy heart because of the impact on jobs, on businesses, the risks to the union."

Boris Johnson who led the ballot last week had clearly said he would leave the European Union without a deal on October 31 if no deal was struck by then.

"In the end, we must do what the country voted for because we are a very old very respected democracy," Hunt told the television channel.

With just two weeks to go before Conservative party workers decide on the candidate, Hunt added that he would continue to "negotiate" until Britain exits the European Union. "Boris needs to answer what he would do in that situation," he retorted.

Hunt had earlier called Johnson a "coward" over his refusal to go for a head-to-head to debate on Brexit. The UK foreign secretary had garnered 77 votes in the final ballot last week to finish behind Boris Johnson who won an overwhelming 160 votes. Hunt edged out Michael Gove who won 75 votes.

Hunt was quick to point out during the interview that if the Brexit moves were not carried out properly then Britain could "trip into a general election, Jeremy Corbyn will become prime minister and then we'll have no Brexit at all."

Hunt favoured sending someone from Britain who "doesn't blink", while adding that the person should be "someone who is able to negotiate, someone that they(EU) trust."