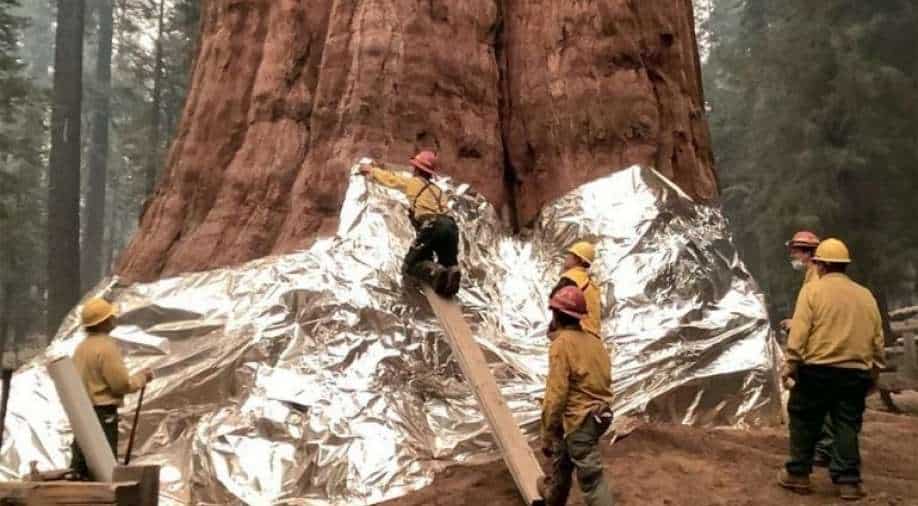 This has led to fires burning on an unprecedented scale. From 2015 to 2020, two-thirds of the giant sequoia groves across the Sierra Nevada were scorched in wildfires, compared with a quarter in the previous century, according to the National Park Service.

Somewhere between a childhood vacation to Sequoia National Park and a college biology class, I latched on to a single fact about California’s giant sequoias: They’re immune to wildfires.

These ancient trees have survived for so long because they had found a way to coexist with a deadly threat. Or so I thought.

In summer 2020, a single fire killed tens of thousands of sequoias in the Sierra Nevada. And this month, blazes in and around Sequoia National Park are lapping at the bases of these massive trees, worrying the firefighters who are scrambling to protect them.

The ever-increasing intensity of fires in California has become too much even for the sequoias, which evolved to survive — even thrive — in fires. The dangers prompted firefighters last week to wrap General Sherman, believed to be the largest tree in the world, in flame-retardant foil in a bid to save it from flames.

Experts say the fires that sequoias endured for centuries were mostly low grade. Thick bark and sky-high crowns protected the trees from serious damage. Heat from the flames even helped them reproduce by releasing seeds from their cones.

But now, California’s sequoia groves are dealing with the consequences of a century of fire suppression that has left forests dense with flammable vegetation. Drought and rising temperatures have killed other plants and turned them into kindling.

This has led to fires burning on an unprecedented scale. From 2015 to 2020, two-thirds of the giant sequoia groves across the Sierra Nevada were scorched in wildfires, compared with a quarter in the previous century, according to the National Park Service.

Sequoias may have adapted to fires, “but not to the confluence of changes that have occurred over the past 100 years,” Joan Dudney, a forest ecologist who has worked in Sequoia National Park, told me.

In summer 2020, the Castle fire killed off as many as 10,600 large sequoias, or 14% of the population, according to the National Park Service. Some of the trees, which grow only in California, were charred from their trunk to their crown.

That has firefighters working to avoid a repeat of last year. They have been clearing brush from the bases of trees and swaddling them in reflective fire-resistant blankets that are also used to protect homes in California.

As of Monday evening, the most well-known trees in Sequoia National Park remained safe, including General Sherman. Firefighters and tree-lovers will nervously wait to see what Tuesday brings.