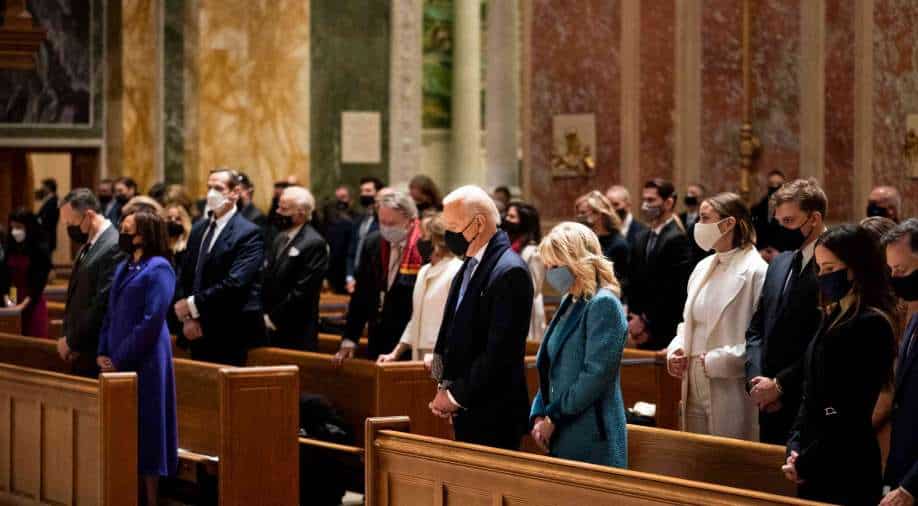 Joe Biden and his wife Dr. Jill Biden attend Mass at the Cathedral of St. Matthew the Apostle, along with Kamala Harris and her husband Doug Emhoff, during Inauguration Day ceremonies in Washington on Jan. 20, 2021. (Doug Mills © 2021 The New York Times C Photograph:( The New York Times )

An intimate group of family, friends and congressional leaders had gathered for Mass, in the place where Pope Francis spoke in 2015 and where the funeral for John F. Kennedy, the nation’s first Roman Catholic president, was held.

Hours before President Joe Biden took the oath of office, he entered the front pew of the Cathedral of St. Matthew the Apostle, the seat of Catholic Washington, and beheld the mosaics behind the altar.

An intimate group of family, friends and congressional leaders had gathered for Mass, in the place where Pope Francis spoke in 2015 and where the funeral for John F. Kennedy, the nation’s first Roman Catholic president, was held.

When it was time for the homily, the Rev. Kevin O’Brien, president of Santa Clara University and friend of the Biden family, compared Biden’s upcoming inaugural message to the words of Jesus.

“Your public service is animated by the same conviction,” he said, “to help and protect people and to advance justice and reconciliation, especially for those who are too often looked over and left behind. This is your noble commission. This is the divine summons for all of us.”

There are myriad changes with the incoming Biden administration. One of the most significant: a president who has spent a lifetime steeped in Christian rituals and practices.

Biden, perhaps the most religiously observant commander in chief in a half-century, regularly attends Mass and speaks of how his Catholic faith grounds his life and his policies.

And with Biden, a different, more liberal Christianity is ascendant, less focused on sexual politics and more on combating poverty, climate change and racial inequality.

His arrival comes after four years in which conservative Christianity has reigned in America’s highest halls of power, embodied in white evangelicals laser-focused on ending abortion and guarding against what they saw as encroachments on their freedoms. Their devotion to former President Donald Trump was so fervent that many showed up in Washington on Jan. 6 to protest the election results.

Biden’s leadership is a repudiation of the claim by many conservative leaders that Democrats are inherently anti-Christian.

His rise comes as fewer registered Democrats identify as Christian. Nearly half are religiously unaffiliated or believers of other faiths, a share that has grown significantly in recent years, according to the Pew Research Center; about 80% of registered Republicans are Christian.

Yet the current influence of liberal Christianity in the Democratic Party goes beyond Biden. Sen. Raphael Warnock, pastor of Ebenezer Baptist Church in Atlanta, won election with a campaign rooted in Black liberation theology. The Sunday after his election, Warnock preached about John the Baptist, the “truth-telling troublemaker,” he said, who was beheaded by King Herod for his prophetic witness.

Rep. Cori Bush, a pastor who led Kingdom Embassy International in St. Louis, has started her tenure in Congress advocating universal basic income. Rep. Alexandria Ocasio-Cortez connects her Catholic faith with her push for reforming health care and environmental policy. She has said her favorite Bible story is one where Jesus, in anger, threw money changers out of the temple.

In his inaugural address, Biden rooted himself and the country in a Christian moral vision that makes room for a pluralistic society, unlike his predecessor who promised to make America a certain kind of Christian nation. Biden quoted Augustine, “a saint in my church,” he said, who wrote that “a people was a multitude defined by the common objects of their love.”

Augustine, the fourth-century North African bishop, recognized that no political community was going to be the city of God on earth, explained Eric Gregory, professor of religion at Princeton University. This passage, from the saint’s “City of God,” has been used in the 20th century “to open up the space for a nontheocratic way for Christians to understand what it means to be citizens in a plural society,” he said.

For Biden, “it was a subtle and explicit effort to show a different vision of a way in which a Christian could imagine themselves as part of a diverse America, one that is defined by these common objects of love, rather than by hate and fear or exclusion,” he said.

While conservative Catholics have doubled down on abortion policy and religious freedom for the past four years, Biden’s policy priorities reflect those of Pope Francis, who has sought to turn the church’s attention from sexual politics to issues like environmental protection, poverty and migration.

On his first day in office, Biden recommitted the United States to the Paris climate agreement, the international accord designed to avert global warming; ended the ban on travel from predominantly Muslim and African countries; and stopped construction on the border wall.

Biden’s support for abortion rights is already causing tension in the Catholic church. Even before the inaugural ceremony had finished, Archbishop José Gomez of Los Angeles, president of the United States Conference of Catholic Bishops, issued an extensive statement criticizing Biden for policies “that would advance moral evils,” especially “in the areas of abortion, contraception, marriage, and gender.” Cardinal Blase Cupich of Chicago, who is known for his alignment with Francis’ social and economic priorities, pushed back on Twitter, calling the statement unprecedented and “ill-considered.”

Biden’s priorities reflect values that progressive faith leaders have pushed for and that motivated many to speak out for him during the campaign, said Derrick Harkins, who led interfaith outreach for the Democratic National Committee this past cycle. There is a sense of moral synergy on the left among not only progressive Christians but also humanists, Muslims, Jews, Sikhs and the spectrum of faith traditions, he said.

The work now “has a chance of really having traction,” he said. “I’m very optimistic about what can unfold.”

Unlike four years ago, when many of the participants in the post-inaugural prayer service were conservative evangelicals or prosperity gospel preachers, this year’s Thursday service included a broad array of religious progressives, including two transgender faith leaders. Rabbi Sharon Brous of IKAR, a Jewish community in Los Angeles, prayed for the coming of a new America, one “built on love, rooted in justice and propelled by our moral imagination.”

The Rev. William Barber II, a chair of the Poor People’s Campaign, preached and directly challenged Biden and Vice President Kamala Harris to pursue a Third Reconstruction, decades after the civil rights era. He urged them to address “interlocking injustices of systemic racism, poverty, ecological devastation/denial of health care, the war economy, and the false moral narrative of religious nationalism.”

Jesus taught that a nation is judged by how it treats the least of these, the poor, the hungry, the sick, the immigrant, he explained in an interview.

“Birth pangs require one thing: pushing,” he said. “That is what the movement has to do.”

For many believers, the shift in the Christianity of the presidency is already personal. On the eve of his inauguration, Biden led the nation in a memorial service on the mall for victims of the coronavirus pandemic.

He adopted the posture of a chaplain, noted Michelle Ami Reyes, vice president of the Asian American Christian Collaborative, a group that started last year to combat anti-Asian racism rising from the pandemic.

“That is a deeply biblical posture,” she said, “mourning with those who mourn.”