In a Kyiv basement, 19 surrogate babies are trapped by war but kept alive by nannies 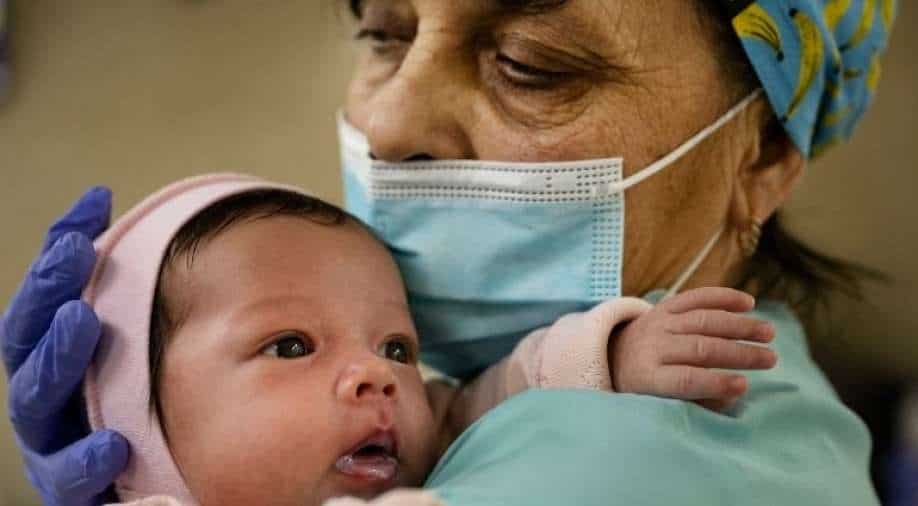 Svitlana Stetsiuk, 50, helps to care for one of 19 babies born to Ukrainian surrogate mothers, now sheltered during the Russian invasion at a basement nursery in Kyiv, on Friday (Lynsey Addario/The New York Times). Photograph:( The New York Times )

Due in part to relatively permissive laws and poverty, Ukraine had what was by some estimates the world’s biggest surrogacy industry. Now, many newborns are facing an uncertain fate

Down a dusty stairwell, hidden from the shelling that has become the grim background noise of Ukraine’s capital, Ludmila Yashenko fusses with the babies. There are 19 of them, sleeping or cooing in neatly arranged cribs, fed regularly from tubs of baby formula.

The kitchen has a sterilizer for bottles, while the nursery has a changing station stocked with diapers. Yashenko and other nannies bounce the babies on their laps and straighten their bibs, even as they watch television, wide-eyed, to learn the latest news from the war.

Death and destruction are rampant in Ukraine, but in this basement there is new life, if also new problems.

There is also the question of how, or if, they can possibly be taken to safety.

Elsewhere, expectant surrogate mothers are trapped by the fighting. Couples abroad have no idea how they will pick up their babies. One agent who connects would-be parents with Ukrainian women made a dash out of Kyiv with two of her clients’ newborns.

In the Kyiv basement, Yashenko and the other nannies are caring for the babies, even as they grow increasingly worried about the war raging overhead.

“Of course, we cannot abandon the babies,” said Yashenko, 51. Her husband and two sons, all soldiers in Ukraine’s army, have urged her to get out of Kyiv.

Ukraine is one of relatively few countries that offer surrogacy services to foreigners. By some estimates, its industry is the largest in the world; lawyers involved in the business say about 500 women are now pregnant in Ukraine as surrogate mothers for foreign clients.

Couples in the United States, Europe, South America and China who cannot have children on their own have turned to Ukraine. Advocates say that surrogacy is safe and provides an irreplaceable service to such couples.

The business has thrived in Ukraine largely because of poverty. Surrogate mothers here typically earn about $15,000 per child. Ukraine does not allow surrogacy for same-sex couples, or for couples who wish to choose the sex of their child.

Fourteen companies offer the service in Ukraine, including BioTexCom, the largest, which is running the basement nursery in Kyiv.

Albert Tochylovsky, owner of BioTexCom, said in an interview that he had faced a hard choice in setting up the basement nursery. The other option, he said, had been to drive about 40 women who were near term across Ukraine during the fighting. He promised to care for the babies.

But Tochylovsky was also fretting about the choice he had made. “Maybe I made the wrong decision,” he said. If the situation worsened, he said he would close the basement nursery and try to evacuate the babies.

Some people in the business have already fled with babies, although the legal implications of doing so are unclear. Svitlana Burkovsa, who has worked as an agent arranging surrogacy services, said she took two newborns to the western city of Uzhhorod, near the border with Slovakia.

“The babies are all right,” she said. “A nanny that I hired and I take good care of them. I do not have a choice but to look after them now.” The clients are two couples in China.

Burkovsa is also keeping track of two pregnant surrogate mothers who were hired by other clients. They are near their due dates but trapped not far from Kyiv, she said. She is trying to have them moved to a maternity ward in western Ukraine in time to give birth.

The business of overseas surrogacy typically relies on careful choreography of travel and legal services, all now disrupted by the war.

Anna, an expectant surrogate mother who, like others quoted, spoke on the condition that only her first name be used, has not left Kyiv because her husband enlisted as a volunteer soldier and she wants to be near him. She is also caring for her own son, she said by telephone.

“I really don’t want to leave him behind. But I have to save two lives: one inside me and the other 9 years old and running around” their apartment, she said.

The biological parents of the baby she is carrying are from China, she said. Although they have a stake in her safety, they cannot now make decisions about her movements.

“I hope the war will end by the time I need to give birth,” she said.

Ania, 26, who has two children of her own, is pregnant as a surrogate mother for the second time. The first time, the baby could not immediately be picked up by clients because of COVID-19 travel restrictions. “I’m just not lucky,” she said.

She is now 31 weeks pregnant with twins and living near Lviv after fleeing Kamianske, in central Ukraine. Her clients, she said, want her to move to Western Europe. But she is afraid to do so, because she may be required to register as the babies’ legal guardian under the less-permissive surrogacy laws that prevail outside Ukraine.

Frederic, the twins’ biological father, shares the same fears as Ania about the legal uncertainties. He and his wife are from France, where surrogacy arrangements face greater legal hurdles.

In November, as alarms were being raised about the possibility of war in Ukraine, Frederic insisted that the surrogacy agency let him contact Ania directly. He and his wife went to Ukraine, and now live together near Lviv with Ania, her husband and her two children.

“We feel very lonely in this process,” Frederic said. One of their many problems is that all the documents proving that he and his wife are the twins’ genetic parents were left behind in Kyiv.

“Have you heard of any family with the same problem as ours?” he asked.

At BioTexCom’s basement nursery in Kyiv, the babies sleep in numbered cribs. A doctor comes by regularly for checkups. The space is clean and well lit. Their swaddles are in prints of pink elephants or flowers.

“The parents are very worried about the situation in Ukraine,” said Yashenko, the nanny. “They are just waiting for the end of this senseless war.”

Sometimes, she said, she feels that she is sleeping and wants to awake to Ukraine before the war. “This is just a nightmare,” she said. “I want to wake up.” But she said the basement was safe, and that she would remain with the babies.

Yashenko had a message for the babies’ parents: “They are cared for, they are fed, they are loved. We have all we need.”