'I WON THE ELECTION': Trump is at it again. Social media too 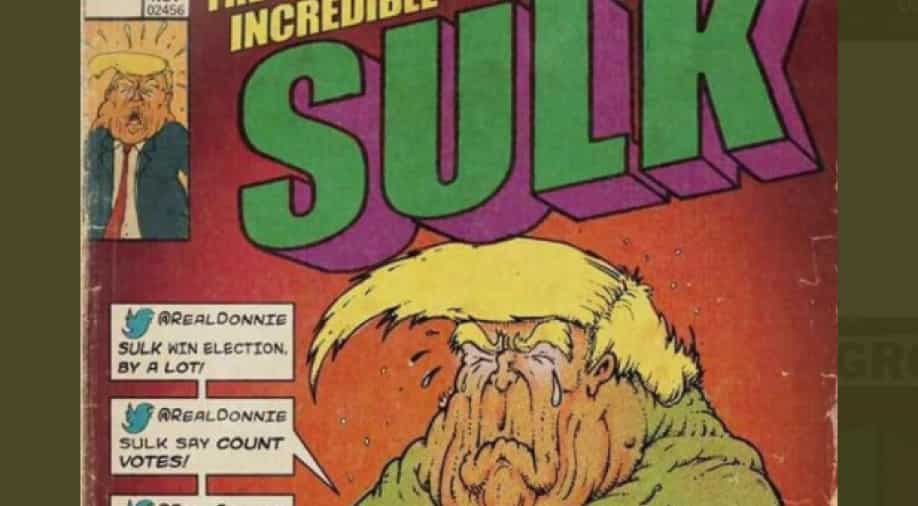 In the real world though, President-elect Joe Biden continues to hurtle toward his January 20 inauguration. And Trump appears ready to announce his next candidacy as soon as he stops pretending that he won this time around.

Here's a surprise (not).

US President Donald Trump, for the umpteenth number of time, Sunday (Monday morning IST) tweeted to say he has won the recently conducted US election.

"I WON THE ELECTION," he posted.

What looked funnier though was the Twitter notice which appeared in a matter of seconds below his post. It said, "Official sources called this election differently."

I WON THE ELECTION!

US media networks have declared Democrat Joe Biden the winner with more than 300 electoral votes.

But the incumbent president is not willing to accept defeat, something that no American President has dared to do so far.

Furthermore, he is calling the election 'fraud' of which no evidence has been found to date. To this end, the Trump administration has even started culling top senior defence officials, replacing them with an array of “yes men”.

Trump’s continued refusal to concede defeat in the November 3 vote is making many democracies across the world look good. No kidding here.

His latest tweet met with similar reactions from several "blue tickers" -- most of whom asked him to chill and let go.

For the love of all things good and sacred...KICK THIS MAN OFF OF TWITTER!

You are a sad, delusional little man with a tiny brain and an even tinier heart. Shut up and concede already.

This is just sad pic.twitter.com/vbCV673iSM

"He won because the Election was Rigged," Trump tweeted.

The first two words -- coming days after a verbal slip in which Trump said "time will tell" if he remains president -- were immediately seized upon as one more step towards a concession.

But the president soon made a U-turn, tweeting: "He only won in the eyes of the FAKE NEWS MEDIA. I concede NOTHING! We have a long way to go."

Looking at the current state of affairs, Trump will not budge so easily. His continued refusal to concede defeat poses a host of national security dangers.

Persuading those who voted for Trump may be a different matter.

More than 10,000 Trump supporters rallied in Washington on Saturday to back his claims of fraud -- massing in Washington's Freedom Plaza before marching to the Supreme Court in a raucous atmosphere.

At least 20 people were arrested after skirmishes erupted, reports said, including four for firearm violations and one for assault on a police officer.

Trump himself made a drive-past of the rally in his armored motorcade, on his way to play golf, smiling through his limousine window to wild cheers.

Near the Supreme Court, some counter-protesters carried black umbrellas and makeshift shields, while others formed a line of bicycles to prevent pro-Trump protesters from approaching their group from the rear. They called Trump supporters “Nazis;” the protesters shouted back a profanity about antifa.

Until now, the president has refused to cooperate in the shift to a Biden administration -- denying the Democrat both federal funding for transition work and vital briefings by outgoing officials.

Democrats say this could have a damaging impact both on national security and on the grave and mounting challenges posed by the coronavirus, with cases soaring past 11 million since the start of the pandemic Sunday -- one million of those in the last six days alone.

Biden won 306 votes to Trump’s 232 in the state-by-state Electoral College system that determines the winner, according to Edison Research, far more than the 270 required to win the election. He also leads in the national popular vote by more than 5.5 million votes, or 3.6%.

With the election results becoming clearer, Trump has discussed with advisers possible media ventures and appearances that would keep him in the spotlight ahead of a possible 2024 White House bid, aides said. But his repeated allegations that the election was “rigged” have inflamed his supporters and stalled the transition to a new administration.

The Trump campaign has filed lawsuits in multiple states with little success thus far. Legal experts have said the litigation is extremely unlikely to alter the election outcome.

In the real world though, President-elect Joe Biden continues to hurtle toward his January 20 inauguration.

And Trump appears ready to announce his next candidacy as soon as he stops pretending that he won this time around.