'I hear your anger, but won't accept violence': Macron to the Muslim community 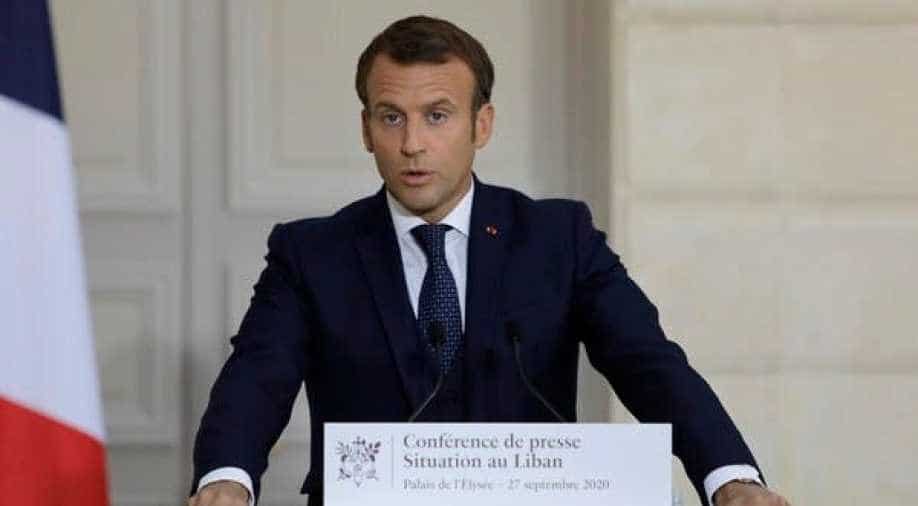 An assailant shouting "Allahu Akbar" (God is Greatest) beheaded a woman and killed two other people in a church in Nice on Thursday. This was in France's second deadly knife attack in two weeks with a suspected Islamist motive.

President Emmanuel Macron sought to calm flaring tensions with Muslims around the world on Saturday, telling an Arab TV channel he understood that caricatures of the Prophet Mohammed could be shocking while lashing out at "lies" that the French state was behind them.

France is on edge after the republication in early September of cartoons of the prophet by the Charlie Hebdo weekly, which was followed by an attack outside its former offices, the beheading of a teacher and an attack on a church in Nice Thursday that left three dead.

An assailant shouting "Allahu Akbar" (God is Greatest) beheaded a woman and killed two other people in a church in Nice on Thursday. This was in France's second deadly knife attack in two weeks with a suspected Islamist motive.

The Nice attack, on the day Muslims celebrated the Prophet Mohammad`s birthday, came amid growing Muslim anger across the world over France`s defence of the right to publish cartoons depicting the Prophet.

The suspected assailant, a 21-year-old from Tunisia, was shot by police and is now in critical condition in a hospital.

The country was again jolted on Saturday evening when a Greek Orthodox priest was shot and wounded in his church in the south-eastern city of Lyon. But officials gave no indication that terrorism was suspected.

Investigators are looking into the possibility that the suspect arrived in the Italian city of Bari in early October, on a ship used to quarantine migrants, before leaving for Palermo.

Macron's officials have ramped up security across the country. The president has deployed thousands of soldiers to protect sites such as places of worship and schools, and ministers have warned that other Islamist militant attacks could take place.

In an effort to rectify what he said were misapprehensions about France's intentions in the Muslim world, Macron gave an interview to Arabic television network Al Jazeera that was broadcast on Saturday.

In it, he said France would not back down in the face of violence and would defend the right to free expression, including the publication of cartoons.

But he stressed that did not mean he or his officials supported the cartoons, which Muslims consider blasphemous, or that France was in any way anti-Muslim.

"So I understand and respect that people could be shocked by these cartoons, but I will never accept that one can justify physical violence over these cartoons, and I will always defend the freedom in my country to write, to think, to draw," Macron said, according to an interview transcript released by his office.

"My role is to calm things down, which is what I`m doing, but at the same time, it`s to protect these rights."

Macron lashed out at "distortions" from political leaders over the cartoons of the prophet, saying too often people were led to believe that they were a creation of the French state.

He slammed "a confusion that has been fed by many media -- and sometimes political and religious leaders -- which is to say that these caricatures are in a way the project or the creation of the French government or the president".

He also denounced calls for a boycott of French goods, backed in particular by Turkish President Recep Tayyip Erdogan and taken up by some retailers in Muslim countries, as "unworthy" and "unacceptable".

He said the campaign was created by some private groups "who relied on lies... sometimes from other leaders" about the caricatures.

Police said on Saturday that another person was taken into custody in connection with the attack. That person joins three others already in custody on suspicion of contacts with the attacker.

On October 16, Samuel Paty, a school teacher in a Paris suburb, was beheaded by an 18-year-old Chechen who was apparently incensed by the teacher showing a cartoon of the Prophet Mohammad in class during a civics lesson.

Protesters have denounced France in street rallies in several Muslim-majority countries, and some have called for boycotts of French goods.