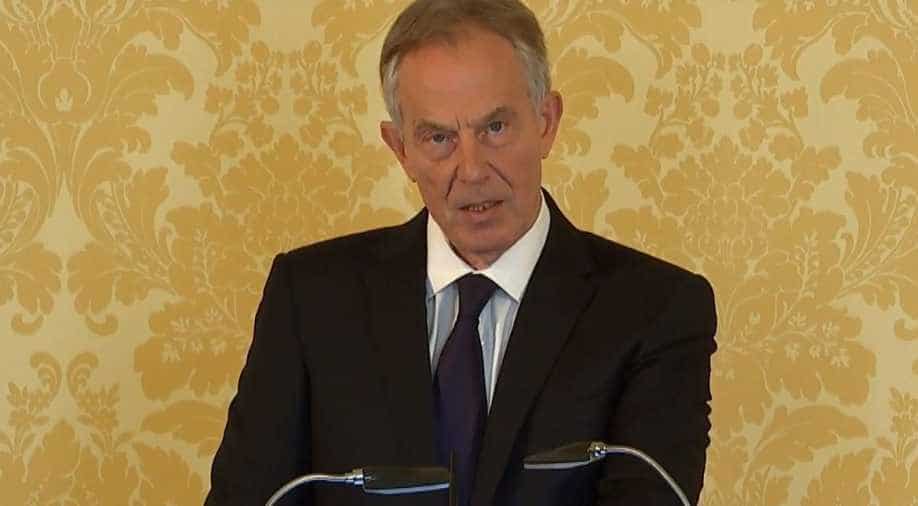 There are many who want Blair to face criminal action over his decision to take the military action that led to the deaths of 179 British soldiers and more than 150,000 Iraqi civilians. Photograph:( Twitter )

Follow Us
Former British Prime Minister Tony Blair told US President George W Bush eight months before the 2003 invasion of Iraq "I will be with you, whatever", and relied on flawed intelligence and unsatisfactory legal advice, a seven-year inquiry concluded today.

In a scathing critique of Blair's leadership, the inquiry said the threat posed by Iraqi dictator Saddam Hussein's supposed weapons of mass destruction had been over-hyped and the planning for the aftermath of war had been inadequate.

More than 13 years since the invasion, the war remains a deeply emotive issue for Britons. There are many who want Blair to face criminal action over his decision to take the military action that led to the deaths of 179 British soldiers and more than 150,000 Iraqi civilians over the following six years.

Critics also say it fuelled a deep distrust in politicians and the ruling establishment. The report was issued 13 days after Britons delivered a stunning blow to their political leaders by voting to leave the European Union.

In a lengthy and passionate defence lasting almost two hours, Blair justified his decision to back Bush and go to war alongside the United States in March 2003, at a time when the inquiry said peace options had not been exhausted and Saddam posed no imminent threat.

"I did not mislead this country. There were no lies, there was no deceit, there was no deception," the former prime minister told reporters, looking gaunt and strained but growing animated as he responded to questions.

"But there was a decision, and it was a controversial decision ... to remove Saddam and to be with America. I believe I made the right decision and the world is better and safer as a result of it."

The only Labour prime minister to win three general elections, Blair was in office for 10 years until 2007 and was hugely popular in his heyday, but Iraq has severely tarnished his reputation and legacy.

Families of slain British soldiers said they were considering whether to take legal action against him.

Blair said he would take the same decisions again, and that he did not see that action as the cause of terrorism today, in the Middle East or elsewhere. However, he acknowledged mistakes had been made.

"For all of this, I express more sorrow, regret and apology than you will ever know."

"I WILL BE WITH YOU"

The inquiry report, running to 2.6 million words or more than four times the length of "War and Peace", shed light on the interaction between Blair and Bush in the months leading up to the invasion, which has long been the subject of speculation about secret deals and pledges.

In a memo dated July 28, 2002, eight months before the invasion, Blair told Bush: "I will be with you, whatever. But this is the moment to assess bluntly the difficulties."

Outside the building where John Chilcot, the inquiry's chairman, delivered his findings, protesters chanted "Tony Blair, war criminal". But the report itself stopped short of saying the war was illegal.

"We have, however, concluded that the circumstances in which it was decided that there was a legal basis for military action were far from satisfactory," Chilcot said.

Reg Keys, whose son, 20-year-old Lance Corporal Thomas Keys, was killed in Iraq, said: "We all know who the key players are ... who took part in this most shambolic episode in British politics. We would like to see all those key players face some form of accountability."

He added: "If that's through the legal channels, then we will look at that and see what's viable and appropriate. It has been passed over to lawyers."

Chilcot said Blair had sought to influence Bush’s decisions, offering Britain's support while suggesting possible adjustments to the U.S. position. But the British leader had over-estimated his ability to influence U.S. decisions on Iraq.

His report also said there was no imminent threat from Saddam at the time of the invasion in March 2003, and the chaos in Iraq and the region which followed should have been foreseen.

Britain had joined the invasion without exhausting peaceful options, and thereby undermined the authority of the United Nations Security Council.

"It is now clear that policy on Iraq was made on the basis of flawed intelligence and assessments. They were not challenged and they should have been," Chilcot said.

He also said that Blair's government's judgements about the threat posed by Iraq's weapons of mass destruction were "presented with unjustified certainty".

No such weapons were discovered after the war.

Chilcot, who said decisions were often taken without other senior ministers being consulted, said Blair changed his case for war from focusing on Iraq's alleged "vast stocks" of illegal weapons to Saddam having the intent to obtain such weapons and being in breach of U.N. resolutions.

"That was not, however, the explanation for military action he had given before the conflict," Chilcot said.

Iraq remains in chaos to this day, with large areas under the control of Islamic State. On Saturday, 250 people were killed in Baghdad's worst car bombing since the U.S.-led invasion.

"I wish Saddam would return; he executed many of my family but he is still better than these politicians and clerics who got Iraq to the way it is," said Kadhim Hassan al-Jabouri, an Iraqi who was filmed attacking Saddam's statue with a sledgehammer after the invasion.

Others said they were grateful to Washington and London for ending his dictatorship.

The purpose of the inquiry was not to point fingers but for the British government to learn lessons from the invasion and occupation that followed.

"We cannot turn the clock back but we can ensure that lessons are learned and acted on," Conservative Prime Minister David Cameron told parliament.

"It is crucial to good decision-making that a prime minister establishes a climate in which it's safe for officials and other experts to challenge existing policy and question the views of ministers and the prime minister without fear or favour."

Jeremy Corbyn, the current leader of Blair's Labour Party and a fervent pacifist, told parliament that the war was an act of aggression based on a false pretext that had fuelled and spread terrorism across the Middle East.