I am a 'very stable genius' and 'like, very smart': Trump 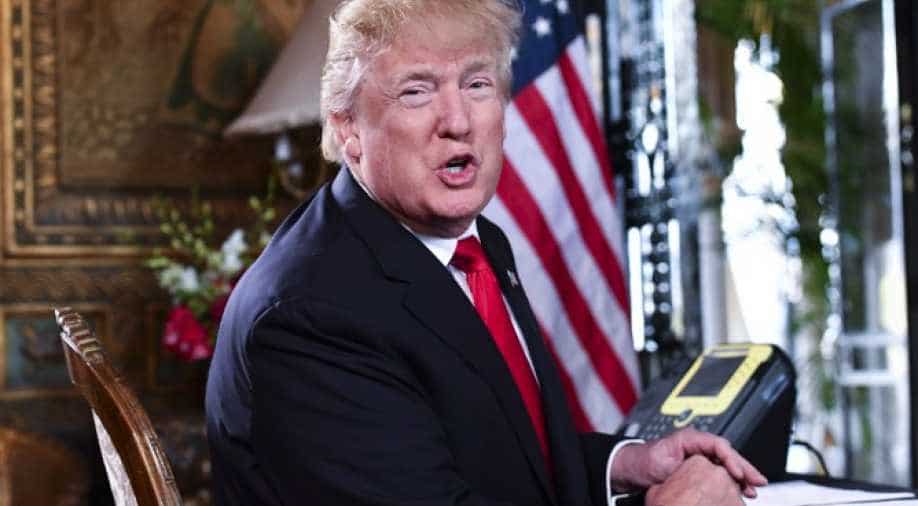 Assessments questioning Trump's stability have grown throughout his first year in office, fuelled by what critics said were his often petulant, and even childish, reactions to criticism. Photograph:( AFP )

US President Donald Trump on Saturday praised himself as "a very stable genius," following the release of a bombshell book that calls into doubt his mental health.

But Trump's response to the book's allegations had Washington focusing anew on the question of his stability.

In a series of extraordinary early-morning tweets, Trump said that "throughout my life, my two greatest assets have been mental stability and being, like, really smart."

"I went from VERY successful businessman, to top T.V. Star to President of the United States (on my first try). I think that would qualify as not smart, but genius....and a very stable genius at that!"

....Actually, throughout my life, my two greatest assets have been mental stability and being, like, really smart. Crooked Hillary Clinton also played these cards very hard and, as everyone knows, went down in flames. I went from VERY successful businessman, to top T.V. Star.....

....to President of the United States (on my first try). I think that would qualify as not smart, but genius....and a very stable genius at that!

The new supposed tell-all book -- Michael Wolff`s "Fire and Fury: Inside the Trump White House" -- was rushed into stores Friday after the Trump administration failed to suppress it.

The book quickly sold out in Washington and has been the talk of the town. Trump has decried the instant best-seller as "phony" and "full of lies" as the White House issued a scorched-earth dismissal of "Fire and Fury" along with its author and his sources.
Trump's stability has been questioned by critics almost since he declared his candidacy for the presidency.

Trump's tweets came ahead of his meetings Saturday with top Republican lawmakers and Cabinet members at the Camp David presidential retreat to discuss party priorities ahead of the crucial 2018 midterm elections.

Yet the sensational details in the new book and Trump's continued defense of his mental health have wrenched attention away from policy and news of US financial markets hitting all-time highs, bringing even more scrutiny over whether the US leader is fit for office.On Friday, Washington's chief diplomat Rex Tillerson was obliged to defend Trump after being asked during an interview about claims that the president has a short attention span, regularly repeats himself and refuses to read briefing notes.

"I`ve never questioned his mental fitness. I've had no reason to question his mental fitness," said Tillerson, whose office was last year forced to deny reports that he had referred to Trump as a "moron" after a national security meeting.

Even in defending Trump, the former ExxonMobil chief executive told CNN he has had to learn how to effectively relay information to the president.

"Let me put a marker in the sand here. One hundred percent of the people around him" question Trump`s fitness for office, Wolff told NBC`s "Today" show.

"They all say he is like a child. And what they mean by that is he has a need for immediate gratification. It's all about him."The book includes extensive quotes from Steve Bannon, Trump's former chief strategist, who accuses Trump's eldest son Don Jr. of "treasonous" contacts with a Kremlin-connected lawyer, and saying the president's daughter Ivanka, who imagines herself running for president one day, is "dumb as a brick."

But it is Trump himself who is cast in the most unfavorable light.

The book claims that for Treasury Secretary Steve Mnuchin and former White House chief of staff Reince Priebus, the president was an "idiot." For chief economic adviser Gary Cohn, he was "dumb as shit." And for National Security Adviser HR McMaster, he was a "dope."

Wolff also says he detected signs that some believe could point to incipient dementia, or at least mental deterioration -- his repetition of the same stories and anecdotes, sometimes within minutes.

The book's publication came as news emerged that at least a dozen members of the US Congress were briefed last month by Yale University professor of psychiatry Bandy Lee on Trump's mental health.

Assessments questioning Trump's stability have grown throughout his first year in office, fuelled by what critics said were his often petulant, and even childish, reactions to criticism.

Last November, Lee wrote to The New York Times that she and several other "concerned mental health professionals" were detecting "more than his usual state of instability," with "characteristics (that) place our country and the world at extreme risk of danger."

The White House has regularly dismissed such criticism, saying it is no secret that the president has a strong personality, but that it makes him a more -- not less -- effective leader.