Hundreds of US Marines land in Norway, irking Russia 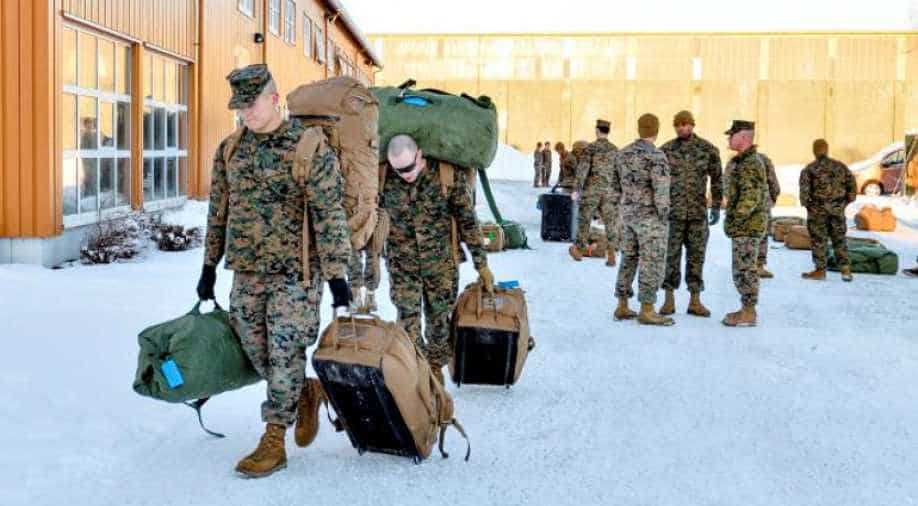 US Marines, who are to attend a six-month training to learn about winter warfare, arrive in Stjordal, Norway January 16, 2017. NTB Scanpix/Ned Alley/via Reuters Photograph:( Reuters )

Some 300 US Marines landed in Norway on Monday for a six-month deployment, the first time since World War Two that foreign troops have been allowed to be stationed there, in a deployment which has irked Norway's Arctic neighbor Russia.

Officials played down any link between the operation and NATO concerns over Russia, but the deployment coincides with the US sending several thousand troops to Poland to beef up its Eastern European allies worried about Moscow's assertiveness.

Marines from Camp Lejeune in North Carolina landed a little after 10 am CET (0900 GMT) at a snow-covered Vaernes airport near Trondheim, Norway's third-largest city, where temperatures were reaching -2 degrees Celsius (28 degrees Fahrenheit).

US troops are to stay in Norway for a year, with the current batch of Marines being replaced after their six-month tour is complete.

A spokesman for the Norwegian Home Guards, who will host the Marines at the Vaernes military base, about 1,500 km (900 miles) from the Russian border, said the US troops will learn about winter warfare.

"For the first four weeks they will have basic winter training, learn how to cope with skis and to survive in the Arctic environment," said Rune Haarstad, a Home Guard spokesman. "It has nothing to do with Russia or the current situation."

In March the Marines will take part in the Joint Viking exercises, which will also include British troops, he added.

The Russian Embassy in Oslo did not immediately reply to a request for comment by Reuters on Monday. It questioned the need for such a move when it was announced in October.

"Taking into account multiple statements of Norwegian officials about the absence of threat from Russia to Norway we would like to understand for what purposes is Norway so ... willing to increase its military potential, in particular through stationing of American forces in Vaernes?" it told Reuters at the time.

A spokeswoman for Norwegian Ministry of Defence also said the arrival of US Marines had nothing to do with concerns about Russia.

However, in a 2014 interview with Reuters, Norway's Defence Minister Ine Eriksen Soereide said Russia's annexation of Crimea showed that it had the ability and will to use military means to achieve political goals.