Hundreds of Chinese protest against BBVA in Madrid, saying bank blocked their accounts 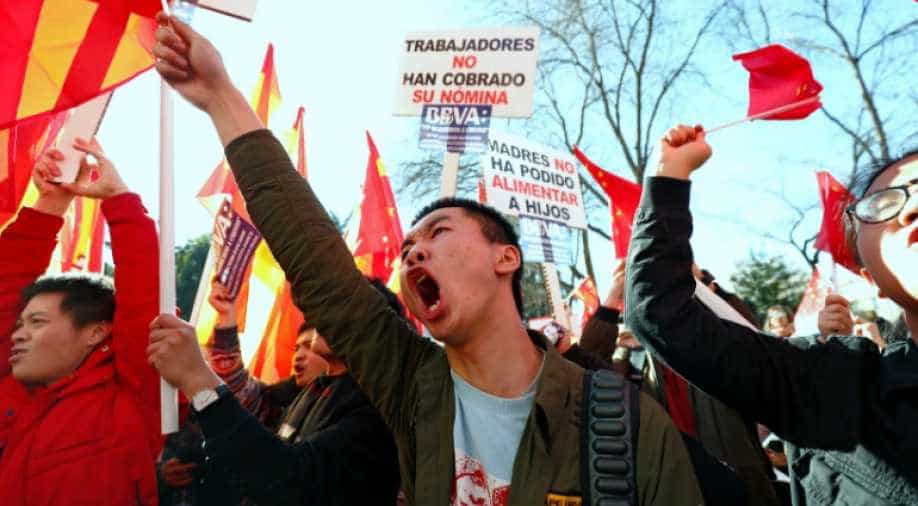 The protesters said they had been told their bank accounts had been blocked because of money laundering regulations but insisted they had done nothing wrong.

Hundreds of Chinese citizens waving Spanish and Chinese flags took to the streets of Madrid on Friday to protest against BBVA, saying the bank had blocked their accounts.

The protesters said they had been told their bank accounts had been blocked because of money laundering regulations but insisted they had done nothing wrong.

"We gathered here to demand equality because we are ordinary citizens. I work in a consultancy office and I don't have suspicious transactions", said Yunajie Chen, a Chinese accountant who arrived in Spain as a child and has been a BBVA client for over six years.

BBVA, Spain's second-largest bank, declined to comment on any of these cases and said it does not discriminate against any clients based on nationality and treats all customers with the same criteria.

Spain beefed up its money laundering regulations last year. The law requires clients to give the bank a series of personal details and background information, regardless of their nationality, said a spokesman for the Spanish banking association AEB, Jose Luis Martinez Campuzano.

However, Dawein Ding, vice-president of a Chinese radio station in Madrid who also works for the Chinese Association in Spain (ACHE), said banks such as BBVA were demanding far more details and making the process more complicated for Chinese citizens than for Spanish nationals.

"For a Spaniard to open a bank account they just have to show their identification card, whereas Chinese citizens have to deliver much more paperwork such as evidence of their work life like payslips and contracts," Ding said.

The protesters, gathered by a major BBVA branch, said increased scrutiny effectively cut them off from paying their utility bills or tuition costs for their children.

"What BBVA and some other banks have done has damaged the legal interests of thousands of ordinary Chinese, the lives of many people...have been affected," said Feng Mao, the head of the ACHE association.

ACHE says between 4,000 and 5,000 people have seen their accounts blocked by BBVA.

Both the Economy Ministry and the Bank of Spain declined to comment on Friday when asked about the complaints of Chinese citizens.

Most vulnerable in England can spend time outdoors from Monday