How Trump slowed rush for Syria exits after huddling in Iraq 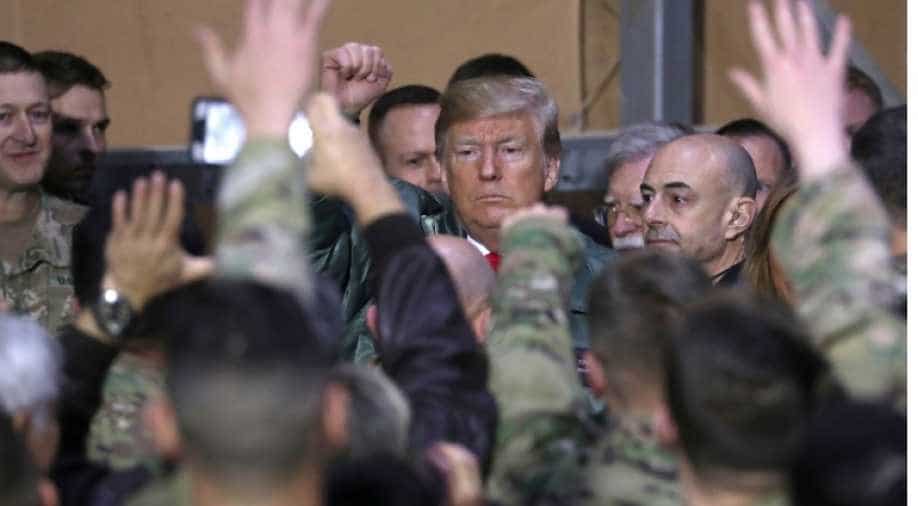 Nearly three weeks after the briefing, no troops have withdrawn from Syria and only some equipment has moved out.

US President Donald Trump was reeling from sharp rebukes at home and abroad over his surprise announcement last month to immediately pull American troops out of Syria when he flew into the al Asad airbase in neighbouring Iraq the day after Christmas.

Inside a canvas Quonset hut, one of the arced prefabricated structures used by the military and surrounded by concertina wire, Trump received operational briefs from US commanders suggesting a territorial victory against Islamic State was within sight, but the military needed just a bit more time, US officials said.

"They were upbeat about their ability to wrap things up," one of the officials told Reuters. "I definitely think that was a seminal meeting" in terms of influencing Trump' thinking.

Lieutenant General Paul LaCamera, the commander of the US-led coalition against Islamic State in Syria and Iraq, explained to a president who had lost patience with the war why too rapid a withdrawal could not be done without putting troops at risk, according to three officials familiar with the briefing, the contents of which have not been reported in such detail.

In the chaotic aftermath of Trump's December 19 announcement, which was one of the reasons that Defense Secretary Jim Mattis resigned, the 45-minute briefing appears to have helped crystallize an understanding between Trump and his top brass on the ground. Trump, in remarks to reporters, admitted that he felt better about the situation after talking to commanders in the theatre instead of officials in Washington.

The briefing also helped win the US military and diplomats some breathing room to plan a more deliberate exit from Syria.

It was a novel experience for the president, who was making his first visit to a war zone in his nearly two years in office, fresh from a political pummelling over his decision on Syria from fellow Republicans in Congress and US allies.

Nearly three weeks after the briefing, no troops have withdrawn from Syria and only some equipment has moved out.

In 2015, then-President Barack Obama first ordered US special operations forces into Syria after long hesitating to deploy "boots on the ground" in the midst of the Syrian civil war. What started off as a mission involving dozens of commandos eventually turned into hundreds and then just kept growing. There are about 2,000 US forces in Syria today.

Although Trump initially announced plans for a speedy pullout, he has since said it does not need to go quickly.

"We are pulling back in Syria, we are going to be removing our troops, I never said we are doing it that quickly," Trump told reporters at the White House on January 6.

In fact, Trump said on December 19 that American troops were coming home and they had already defeated Islamic State in Syria. No experts believe Islamic State has been defeated, despite the group having lost almost all of the territory it held in 2014 and 2015 after seizing parts of Syria and Iraq and declaring a "caliphate."

The Pentagon said on Friday that the withdrawal "is not subject to an arbitrary timeline," and would take into account conditions on the ground and talks with allies.

Trump's concession of additional time has set off an apparent scramble by the US military and Trump administration officials to accomplish as much as possible in the twilight of the Syria campaign.

US officials told Reuters that planning for a complete withdrawal from Syria is still underway, despite confusing and sometimes contradictory statements from the White House and tension with Turkey, which was meant to take over the campaign against Islamic State.

Several officials said they expected a withdrawal before the end of March, but would not commit to a date, given fast-evolving policy discussions and hard-to-predict battlefield developments.

Privately, some US officials worry the final push will not be enough to preserve hard-won gains against Islamic State or ensure protection for US-backed Kurdish YPG allies who helped in the fight. NATO ally Turkey views Kurdish militia as terrorists, an extension of a Kurdish insurgency in Turkey.

Trump himself acknowledged his concerns for the Kurds on Monday, warning Turkey of "economic devastation" if it attacks a US-allied Kurdish militia in Syria. US Secretary of State Mike Pompeo said he believed Trump was referring to sanctions.

According to US estimates, Islamic State oversaw about 100,000 square kilometres (39,000 square miles) of territory, with about 8 million people under its control. The group had estimated revenues of nearly one billion dollars a year and used its de facto capital of Raqqa, Syria as a base to plot attacks in Europe.

Backed up by US-led coalition airstrikes, artillery and advisers and equipment, US-supported ground forces in Iraq and Syria clawed back towns and cities from the jihadists. Iraq declared victory against the group in 2017.

US military officials are reluctant to predict how quickly Islamic State militants can be vanquished from their final towns in Syria, recalling how the insurgents fought until the death in Mosul, Iraq. The group still influences about 300 square kilometres in the Middle Euphrates River Valley, according to the US-led coalition.

The persistence of the group was one of the reasons that Trump's decision stunned the Pentagon.

But after the initial shock, military and civilians leaders including Mattis met at the Pentagon the week before Christmas to discuss the quickest, safest and most responsible way they could carry out the troop pullout and protect Kurdish allies.

It became clear that a rapid 30-day withdrawal, as initially suggested by the White House, would not meet the criteria of a "safe and responsible" withdrawal. Before Trump's surprise decision, Pentagon planning had suggested four months would be needed.

One source played down Trump's concerns about whether the drawdown would be done in weeks or months.

"All he wants to know is that it is happening," the source said.

Significantly, Mattis order issued before Christmas did not include a specific timeline, although US officials said military commanders told the White House that a safe and responsible drawdown could not be done in less than 120 days. The order has not been changed since Mattis left office on December 31, when his deputy Patrick Shanahan took over, officials said.

In the meantime, the US-backed forces in Syria, including Kurds, are keeping up the fight - confounding analysts predictions that they would rapidly head north to prepare for an offensive by Turkey.

In fact, since Trump's withdrawal announcement, those forces have been fighting Islamic State with support from US-led coalition air strikes and artillery.

US allies, who were caught entirely off-guard by Trump's announcement, are still seeking clarification about the timing of America' exit.

The troop pullout from Syria dominated discussions by Pompeo during his meetings in Amman, Cairo, Abu Dhabi, Riyadh, and Iraq over the past week, in which he told US allies that withdrawal was a tactical change only.

Allies also want information about any post-withdrawal role by the US military to ensure Islamic State militants do not rise from the ashes of their caliphate, US officials and diplomats said.

But they appear relieved at the apparent slowdown of the pullout.

"It seems that there has been a change that I think is positive," French Foreign Minister Jean-Yves Le Drian of France said last week.