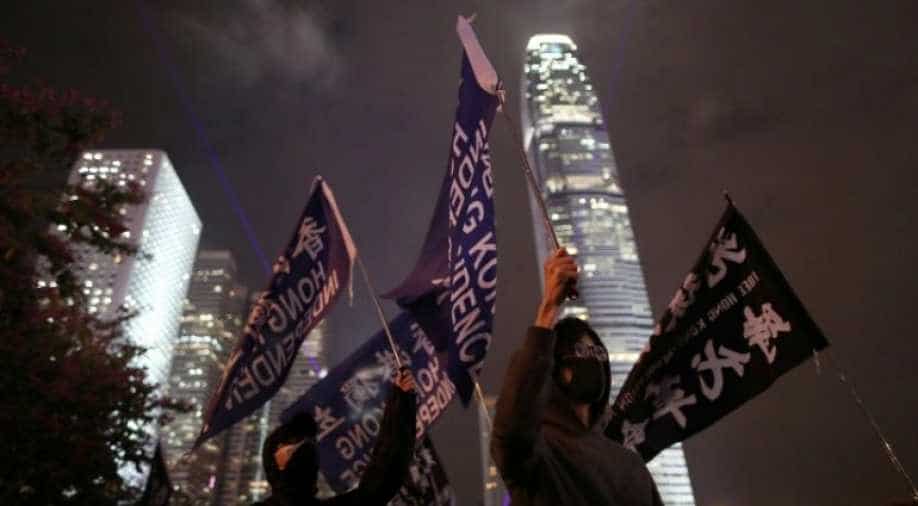 As evening fell, dozens of protesters dropped flowers near the Prince Edward metro station, which was the scene of some of the most violent clashes with the police this summer.

Hong Kong protesters marched through shopping malls on New Year's Eve urging people not to give up the fight for democracy in 2020, while police were out in force across the city to quell any unrest.

As evening fell, dozens of protesters dropped flowers near the Prince Edward metro station, which was the scene of some of the most violent clashes with the police this summer.

Demonstrators plan a giant human chain later on as well as late-night demonstrations dubbed "Suck the Eve" in the downtown bar and entertainment district of Lan Kwai Fong and the picturesque Victoria Harbour.

Wong, a 22-year-old freelance photographer who gave only his last name, said he did not feel like celebrating New Year.

"I can't even celebrate my birthday. I choose to stand here because at least we can chant a little and it feels like I’m with family," he said.

The protests began in June in response to a now-withdrawn bill that would have allowed extraditions to mainland China, where courts are controlled by the Communist Party and have evolved into a broader pro-democracy movement.

Many streets were decorated with Christmas lights and other seasonal paraphernalia, but the mood on Tuesday was less than festive as officers in riot gear patrolled the busiest areas.

In a prime shopping mall in the Tsim Sha Tsui area popular with tourists, dozens of protesters chanted pro-democracy slogans and riot police stopped people to search their backpacks.

Authorities have cancelled the popular midnight fireworks for the first time in a decade, citing security concerns.

The fireworks usually draw thousands of locals and tourists to the harbour front and the countdown is broadcast worldwide.

They will be replaced with "Symphony of Lights", a multimedia light show involving projections on the city's tallest skyscrapers at the stroke of midnight.

The facade of the waterside Hong Kong Convention and Exhibition Centre was turned into a giant countdown clock.

"Let's start 2020 with a new resolution, to restore order and harmony in society. So we can begin again, together," said Lam in the 3-minute address.

"Hong Kong people have resolved many difficulties before. With our resilience and wisdom, I believe we can once again overcome our current challenges and rebuild Hong Kong."

Police say they have arrested nearly 6,500 people since the protests began escalating in what is the worst political crisis faced by the city in decades.

On Jan. 1, tens of thousands of people are expected to join a major pro-democracy march, after it received police approval to proceed.

The previous such march by organisers, the Civil Human Rights Front (CHRF), in early December, drew an estimated 800,000 people.

The New Year demonstrations follow a pick-up in clashes since Christmas Eve when riot police fired tear gas at thousands of protesters following scuffles in shopping malls and in a prime tourist district.

"On New Year's Day, we need to show our solidarity ... to resist the government. We hope Hong Kong people will come onto the streets for Hong Kong's future," said CHRF leader Jimmy Sham.