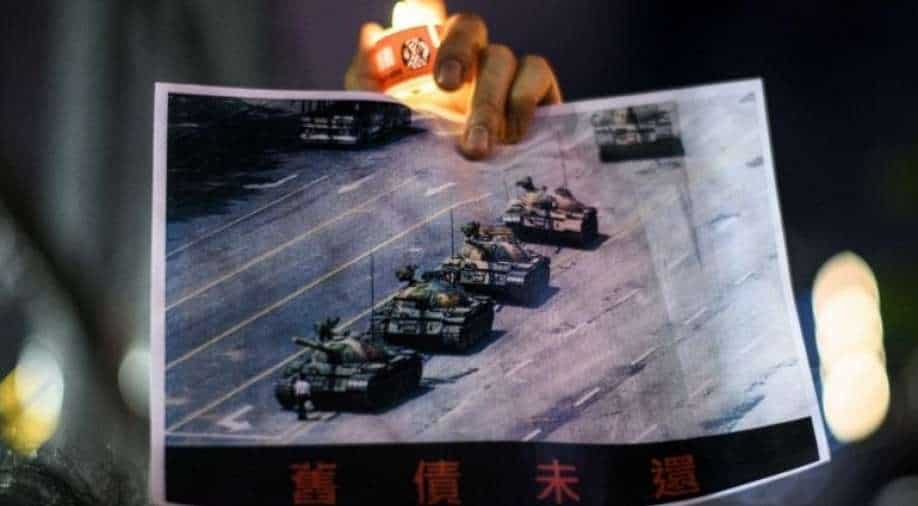 A man holds a poster of the famous 'Tank Man' standing in front of Chinese military tanks at Tiananmen Square in Beijing on June 5, 1989. Photograph:( AFP )

Monuments marking Beijing's 1989 crackdown on the Tiananmen protests have been cleared from two more universities in Hong Kong — a day after a sculpture commemorating the victims was dismantled.

A 6-meter (21-foot) replica of Chen Weiming's enormous statue that students had raised in Tiananmen Square was among the sculptures dismantled.

Another relief sculpture commemorating the Tiananmen Square crackdown, sculpted by Chen, was removed from Lingnan University in Hong Kong.

Activists and dissident artists had protested the removal of a statue commemorating the crackdown on Hong Kong's oldest university the day before.

Thousands of protesters slept in the square for weeks, but the military stepped in and opened fire in June.

According to the Chinese government, 200 civilians and a few dozen security officers were killed.

Other estimates have ranged from a few hundred to tens of thousands.

Hong Kong was once one of the only areas in China to allow public commemoration of the massacre, which is still a touchy subject in mainland China.

Activists claim that the law is being used to stifle civil society, imprison democracy activists, and restrict basic liberties.