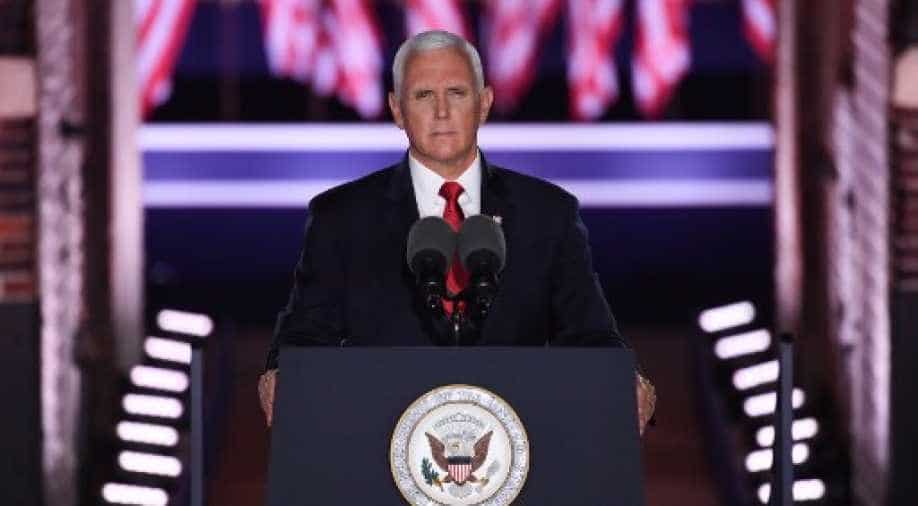 Pence speaks during the third night of the Republican National Convention Photograph:( AFP )

"America sees President Trump in lots of different ways, if you want a president who falls slient when our heritage is demeaned or insulted, he's not your man," the US vice-president said, adding,"he does things his own way, on his terms."

"Not much gets past him and when he has an opinion, he's liable to share it," he said. "He certainly kept things interesting."

"We rebuild our military, the president signed the largest increase in our national defence since the days of Reagan and created the first new branch of our armed forces in 70 years in the United States space force," the US vice president asserted.

"We also returned American astronauts to space on an American rocket for the first time in nearly 10 years and after years of scandal, it robbed our veterans the care that you earn in the uniform of the United States."

"Veterans choice is now available for every veteran in America," he added.

"History records that Joe Biden even opposed the operation that took down Osama Bin Laden," he said.

"I was there when President Donald Trump gave the order to take out the world's most dangerous terrorist - Qasem Solemani is gone," Pence stated.

Pence said the US will have a safe COVID-19 vaccine by the end of the year.

Pence said Biden didn't say "one word" about violence and chaos engulfing cities across America. "So lets be very clear, the violence must stop whether in Minneapolis or Kenosha."

"President Trump and I will always support the right of Americans to peaceful protest but rioting and looting is not peaceful protest, tearing down statues is not free speech and those who do so will be prosecuted to the fullest extent of the law."