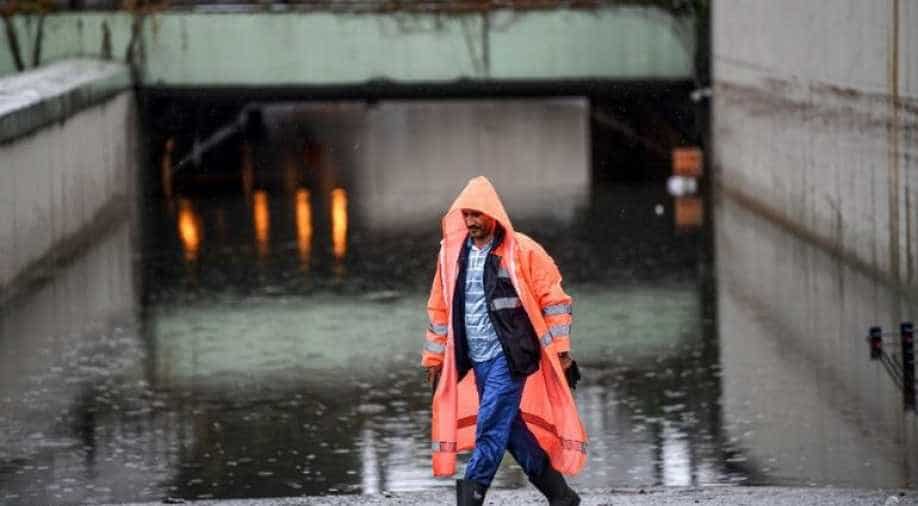 A municipality worker walks near a flooded underpass after a heavy rainfall, in Eminonu district, Istanbul. Photograph:( AFP )

The rain started early in the day in parts of Istanbul and picked up pace around noon.

Strong rains in Istanbul on Saturday flooded several neighbourhoods, as well as the Grand Bazaar, while officials said one person was found dead in the city.

The rain started early in the day in parts of Istanbul and picked up pace around noon.

Footage from parts of the Grand Bazaar showed shopkeepers, ankle-deep in water, clearing the water out of their stores and the halls. It also showed water pouring out of a hole in the wall into the bazaar, as well as a manhole left open to drain the flood.

A homeless man was found dead in the Unkapani area on the European side of the city due to the flood, the spokesman for the Istanbul municipality said on Twitter.

Several roads across Istanbul, including parts of the road on the shores of the Bakirkoy district and a section of one of the city's main highways, had also been submerged, Istanbul municipality's Disaster Coordination Centre (AKOM) said.

The rains also flooded an underpass where several shops are located in the Eminonu neighbourhood, it said. Footage on Turkish media showed hundreds of books and goods floating in the water as shopkeepers submerged up to their waists worked to clear the area.

AKOM said 114 kilograms of rain per square metre had fallen in the Fatih district, where the Grand Bazaar, as well as the Unkapani and Eminonu areas, are located.