Gustavo Petro vs Rodolfo Hernandez: Here’s all you need to know about Colombian presidential elections 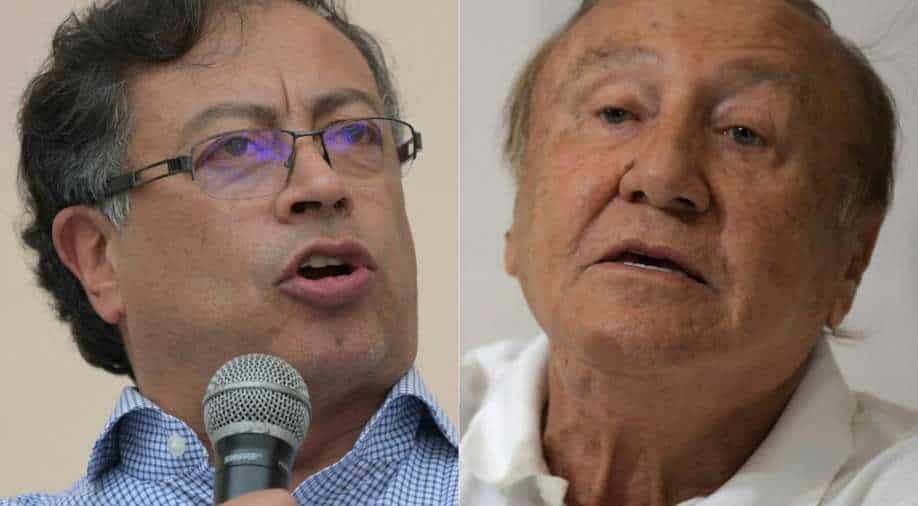 On June 19, hundreds and thousands of eligible people will come out to elect their next president

Only a day is left for the all-important presidential elections to kick off in Colombia which has been marked by death threats against candidates, scandals and accusations of fraud.

On June 19, hundreds and thousands of eligible people will come out to elect their next president. The elections are being viewed as a tight race between left-wing candidate Gustavo Petro and 77-year-old populist real estate magnate-turned-politician Rodolfo Hernandez, who has promised drastic budget cuts and jail for corrupt officials.

The latest polls show Hernández neck and neck with Petro, a former guerrilla fighter and veteran politician who had been the clear front-runner all year long.

The first round of voting took place in May this year where Petro won just over 40 per cent of the vote, while Hernandez secured 28 per cent, edging out Petro's expected competitor, the right-wing former Mayor of Medellin, Federico "Fico" Gutierrez. While the Incumbent President Iván Duque is ineligible for a second term.

Since none of the candidates won by an absolute majority, Petro and Hernandez will now face off in the second round of voting.

Here are all the details about the Colombian elections and the candidates.

Who is Gustavo Petro?

The 62-year-old leader is a former mayor of Bogota, whose 2022 bid marks his third presidential campaign, reports CNN.

His political campaign focused on radical overhaul of the country's economy to combat one of the highest inequality rates in the world.

Petro, a former guerrilla fighter, has framed his campaign around whether Colombia is ready to elect a revolutionary. He's campaigned on attracting foreign investment in clean energy, new technologies, transportation and telecommunications.

Hernández is real estate mogul and a former mayor. A self-proclaimed "King of TikTok”, the 77-year-old communicates via the social media app rather than conducting rallies and giving speeches.

He did not appear in several of the televised debates organised by Colombia's main broadcasters, and rarely gave interviews to foreign outlets.

In a recent interview on Colombian TV, he said that nearly all politicians were "traitors, liars, clowns and hypocrites and we are going to kick them out."

Pressing issues in this election

Colombia has been among the fastest growing countries in Latin America in recent years, but the people, especially poor and working families, have not befitted from this prosperity.

Petro is banking on frustrated voters who feel disillusioned by the country's economic outlook and who have suffered the most in the last four years, as wages stagnated under former president Duque's watch.

As a whole, the country is richer than it was since Duque came to power in 2018, however the value of the average worker's annual salary has dropped significantly as the Colombian peso has plunged 40 per cent in value against the dollar since, reports CNN.

That situation has only exacerbated by rising inflation and the war in Ukraine.

Hernandez, on the other hand, is also trying to exploit some voters' discontent with the traditional political system, his approach on the economy -- with a focus on corruption -- is more moderate than Petro's.

The election is also being held as the country's security situation is deteriorating.

The violence is tied to the country's narcotics production and trafficking, with Colombia's cocaine production having significantly increased in recent years.

How to restore state control over those areas —and fight back the cartels —is a key conversation in this election, and will prove a formidable challenge for the next president.