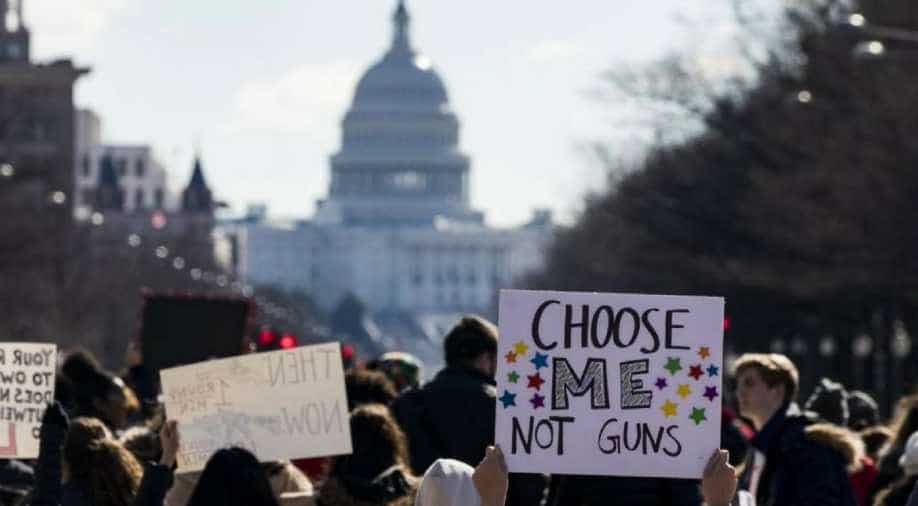 More than a million Americans flooded the streets of cities nationwide for emotional protests demanding tighter gun control on Saturday, protests spearheaded by teenagers from a Florida high school where 17 people were shot dead last month.

"Politicians, either represent the people or get out," Cameron Kasky, a 17-year-old from Marjory Stoneman Douglas High School in Parkland, Florida, told the crowd at a huge rally in Washington.

"Stand for us or beware -- the voters are coming," said Kasky, one of the leaders of a dynamic and passionate student movement which has emerged following the February 14 shooting at his school.
Large crowds also turned out for demonstrations in Atlanta, Boston, Chicago, Dallas, Denver, Los Angeles, Miami, Minneapolis, Seattle and other cities -- more than 800 in all according to the organizers of the "March For Our Lives."

Amazing! Final NYC tally: 175,000 joined #MarchForOurLives. And this is a movement that has JUST BEGUN. These students WILL change America!

This movement is going to make a huge change in our country. #MarchForOurLives pic.twitter.com/hknTXcVfTK

You have to know when a revolution is starting... Today in NYC already 150,000 have taken to the streets for PEACE pic.twitter.com/j5y0y0L3IT

But the largest protest was in Washington, where organizers told NBC News the crowd was estimated at more than 800,000 people, the largest gun control rally in the United States since the Million Mom March in 2000.

The main stage for the event in Washington was set up near the US Capitol and lawmakers were the target audience as speakers delivered blistering warnings that the time has come for stricter gun laws.

March organizers included a link for people to register to vote on their MarchForOurLives.com website as they seek to transform their nascent movement into a potent political force.Signs carried by protestors lambasted lawmakers who oppose tougher laws and the National Rifle Association (NRA), the powerful US gun lobby.

"These kids are right," said Jeff Turchin, a 68-year-old retired garment manufacturer who came to Washington from New York to attend the rally.

"They`re basically saying the NRA is paying off these Republicans," Turchin said of the party of President Donald Trump, which also controls Congress.

The Washington rally kicked off with Andra Day singing "Rise Up" and also featured performances by Jennifer Hudson, whose mother, brother and seven-year-old nephew were shot dead in 2008.
But the most riveting appearances were by the Stoneman Douglas students.

Emma Gonzalez, 17, took the stage wearing a green military-style jacket and ripped jeans and delivered a eulogy for the 14 students and three adults slain by 19-year-old gunman Nikolas Cruz.
Tears rolling down her face, she then stood in silence at the podium for a full four and half minutes as the crowd fidgeted and some cried out "We`re with you Emma."

"Since the time that I came out here, it has been six minutes and 20 seconds," Gonzalez finally said -- the exact amount of time Cruz spent spraying bullets inside her school before fleeing.

"Fight for your lives before it`s someone else`s job," Gonzalez said. "Get out there and vote."

"My grandfather had a dream that his four little children will not be judged by the colour of their skin but by the content of their character," she told a rapt crowd.

"I have a dream that enough is enough," she said, referencing her grandfather`s famous 1963 "I Have a Dream" speech on ending racism.

"And that this should be a gun-free world -- period."In New York, former Beatle Paul McCartney showed up at a march and spoke of the December 1980 murder of his bandmate John Lennon.
"Every week you hear about a new shooting and nothing is done about it," McCartney told AFP. "But I think maybe after this something will be done about it."

On the other side of the country in Los Angeles, comedian Amy Schumer delivered a passionate plea in front of hundreds of thousands.

"You are killing children," she said, of the gun lobby. "And they call people like me `Hollywood liberals` like there`s something in it for us.

"Well, what`s in it for us is knowing we`re doing our part to keep our children alive."

Demonstrations of solidarity also took place around the world, including across cities in Canada, which unveiled stricter gun laws earlier this week including enhanced background checks.

In Scotland, some relatives of those killed in a school shooting in the town of Dunblane in 1996 attended a protest in Edinburgh.

Thousands meanwhile gathered in Parkland to pay tribute to those slain in the city on Valentine`s Day.

"I March Because I Was Almost Silenced," read a sign carried by Samantha Mayor, 17, who was shot in the knee and wears a heavy brace.

Samantha`s mother, Ellyn, held a sign reading "I`m Marching So No Other Parent Has to Hear `Mom, I`ve Been Shot.`"

Trump was in Florida as marchers gathered in Washington but the White House issued a statement.

"We applaud the many courageous young Americans exercising their First Amendment rights today," it said. "Keeping our children safe is a top priority of the President`s."