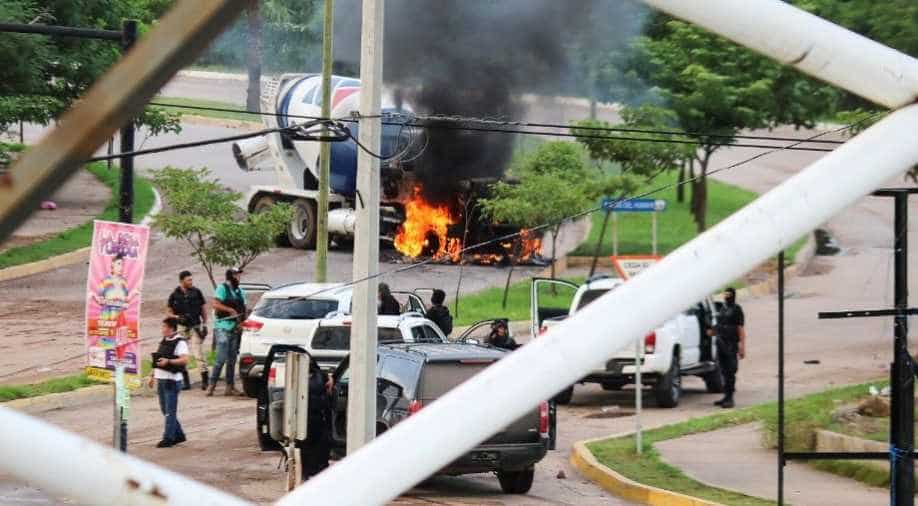 The residents of the Mexican city overwhelmed late last week by a small army of drug cartel gunmen.

The residents of the Mexican city overwhelmed late last week by a small army of drug cartel gunmen spent the weekend picking up the pieces of their bullet-riddled homes and businesses.

While many struggled to make sense of how easily dozens of gunmen poured into the city to thwart the attempted arrest of Ovidio Guzman, a son of jailed drug lord Joaquin "El Chapo" Guzman, others busied themselves with the cleanup.

Just off the entrance of a local seafood restaurant that found itself at the heart of Thursday's hours-long siege in the city's Tres Rios neighbourhood, workers scrubbed away the dried blood from the steps.

The workers said the spot marked the final resting place of cartel gunmen following what officials described as 14 separate, armed attacks launched by the Sinaloa Cartel's convoys of pickup trucks against Mexico's outmatched military at different points in the city.

Upon finding out authorities sought to capture Ovidio Guzman and extradite him to the United States, the cartel strategically erected 19 blockades backed up by heavily-armed gunmen during a roughly four-hour stretch in the afternoon that prevented additional military and police from responding as terrorized locals scurried for cover.

One of the most intense firefights took place on the block behind the restaurant where local residents said several military vehicles had stopped along with a nondescript building with tall, white walls, in a bid to extract El Chapo's son from a residence inside.

The walls were covered with hundreds of bullet holes as if the building had broken out in a rash.

The soldiers in the vehicles came under heavy fire from a hill across an adjacent drainage canal, and several homes in between were caught in the crossfire.

"The walls are all full of holes," said Jose Manuel Murrieta, whose home is located just below the hill where he said gunmen had taken up positions to fire upon the military vehicles.

He pointed out, with fingers covered in paint from the repairs he had started, where his mattress was now covered by a blanket of glass.

An avocado tree in the lush garden outside his bedroom had been split open by bullets and Murrieta estimated that he had already found around 500 bullet casings nearby.

He spotted another on the ground, squatted down to pick it up and then handed it over like it was a souvenir.

Like other local residents, he wonders about the possible infiltration of the cartel into local and state police but said there is no doubt that the cartel proved itself to be the stronger force, at least for one violent afternoon last week.

And then his face turned angry and he pursed his lips. "It's infuriating," he said, "because you have to ask yourself, 'Who's really in charge?'"