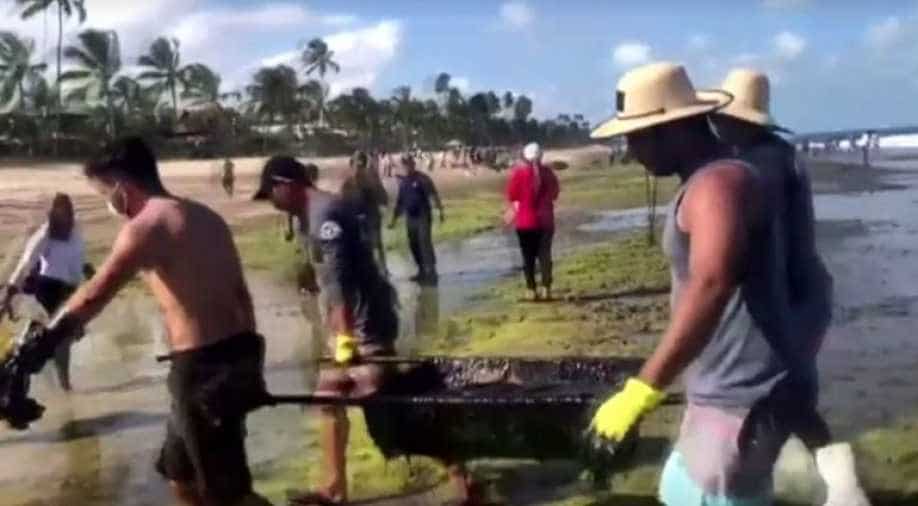 Oil washing up on the beach of a popular Brazilian tourist resort area.  Photograph:( Reuters )

The defence ministry said a search warrant for the unnamed ship had been issued.

Greek authorities said Saturday that a Greek ship was one of five vessels suspected in oil spills that have been appearing along the coast of Brazil for two months.

The Brazilian defence ministry said Friday that a Greek-flagged tanker was the main suspect in the search for culprits after oil began appearing in early September and has been seen along a 2,000-kilometre  stretch of the northeastern Atlantic coast.

A spokeswoman for the Greek coastguard, which answers to the merchant navy ministry, told AFP that "the investigation conducted in Brazil showed that five ships from different countries are suspects, including a Greek one".

She did not give the names of the vessels, which had now left Brazil to unknown destinations, or their owners, but said that "detailed controls will be carried out by the Greek authorities should those vessels arrive in a Greek port".

Investigators in Brazil studied 1,100 ships navigating through the area before narrowing down the potential culprits to 30, and then settling on the Greek-flagged ship as the "prime suspect".

The defence ministry said a search warrant for the unnamed ship had been issued while the attorney general's office said the damage to Brazil's coasts was "immeasurable."

Separately, police raided the Rio de Janeiro offices of a company linked to the owners of the ship, federal police said.

"This environmental catastrophe has reached estuaries, mangroves and river mouths all over northeastern Brazil, causing damage to fishing, aquaculture and tourism," the police said in a statement.

The defence ministry said the ship was transporting oil.