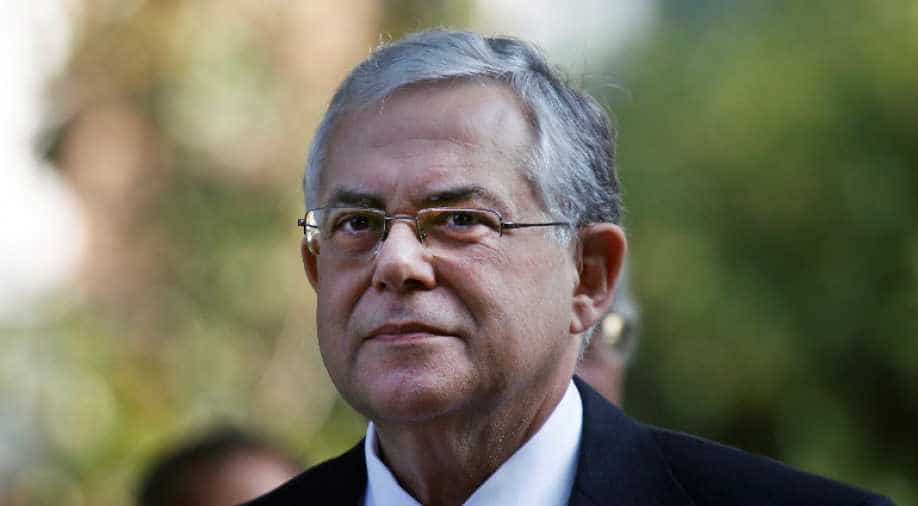 Papademos became caretaker prime minister from late 2011 to May 2012, fusing a fragile governing coalition between socialists and conservatives. Photograph:( Reuters )

Police said that Papademos's injuries were not life-threatening||Greece has a history of small-scale attacks against politicians, businesses and police

Greece's former prime minister Lucas Papademos was injured when a booby-trapped package exploded in his car in central Athens on Thursday, police said, in the most dramatic act of political violence in the crisis-hit country for several years.

Police said Papademos's injuries were not life-threatening, and an Athens hospital source told Reuters he was being treated for superficial wounds to his abdomen and a slightly deeper injury to his right leg.

Greece has a history of small-scale attacks against politicians, businesses and police. Greek police say they intercepted several suspected packages addressed to Greek, German and International Monetary Fund officials in the past two months.

But Thursday's blast, in which an unnamed police official said two others in the vehicle were also hurt, was the most prominent since a booby-trapped package killed a guard for then Public Order Minister Michalis Chrysohoidis in 2010.

Papademos, a low-key figure who was more of a technocrat than a politician, was catapulted to the forefront of Greece's debt crisis when he became caretaker prime minister from late 2011 to May 2012, fusing a fragile governing coalition between socialists and conservatives.

The country remains in recession with the highest unemployment rate in Europe, and a stalled creditor review has interrupted payouts under its international bailout programme, its third since 2010.

A health ministry official said Papademos suffered injuries to his chest and abdomen after opening a package in his moving car.

Greek media reported the vehicle was armoured, containing the blast within its interior.

Footage from the scene, at a busy intersection in central Athens during rush hour, showed a black vehicle with its hazard lights on, virtually undamaged save for extensive cracks on the front windscreen.

"I felt my car shake ...it was like a small earthquake," an eyewitness told Greece's Skai TV. He said he saw the doors of the vehicle be prised open from the blast.

"It was total panic," he said.

Papademos has been in retirement since stepping down as caretaker prime minister in May 2012.

A Greek central bank source said Papademos had just left the Bank of Greece building when the explosion occurred. It was unclear whether the suspect package had been delivered there.

A police source said fragments of an envelope found at the scene of the incident suggested it was delivered to the Academy of Athens, of which Papademos is president.

An envelope containing bullets and addressed to Greece’s general secretary for public revenue was intercepted at a post office branch in Athens on Tuesday.

In March, police intercepted eight suspect packages at a postal sorting centre in Athens, days after letter bombs were sent and detected at the German Finance Ministry and the IMF in Paris. The rigged package to the IMF exploded, injuring an employee.

Fauci says pandemic exposed 'undeniable effects of racism' in US