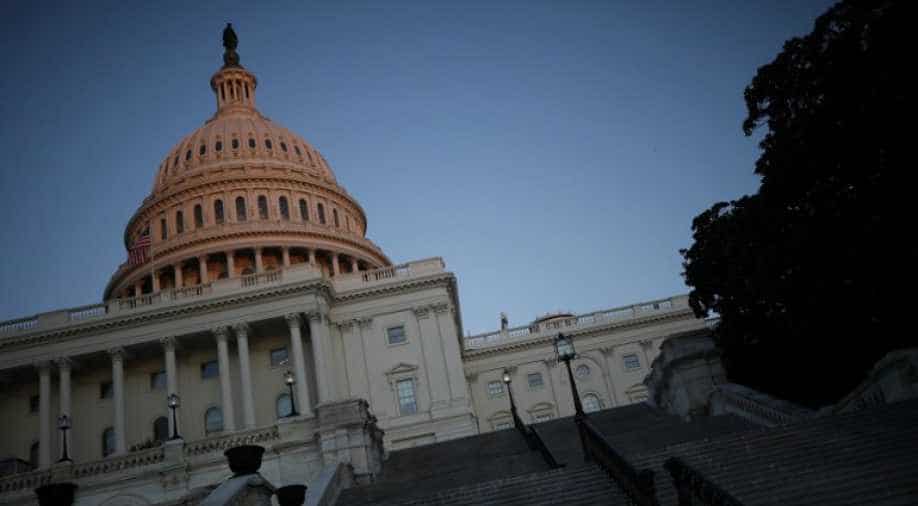 Trump is insisting Congress shell out $5.7 billion as about 800,000 federal workers go unpaid during the partial shutdown. Photograph:( AFP )

Neither Trump nor Democratic congressional leaders have shown signs of bending on the issue of funding the wall that he promised to build along the border with Mexico.

The US economy is taking a larger-than-expected hit from the partial government shutdown, White House estimates showed on Tuesday, as the impasse between President Donald Trump and Democrats over a wall on the southern border dragged into its 25th day.

Trump was expected to host some members of Congress for lunch at 12:30 pm EST (1730 GMT) where the shutdown was sure to be discussed. A guest list was not immediately provided and the White House and congressional leaders declined requests to comment.

Neither Trump nor Democratic congressional leaders have shown signs of bending on the issue of funding the wall that he promised to build along the border with Mexico. Trump is insisting Congress shell out $5.7 billion as about 800,000 federal workers go unpaid during the partial shutdown.

The Trump administration had initially estimated the shutdown would cost the economy 0.1 percentage point in growth every two weeks that employees were without pay.

But on Tuesday, there was an updated figure - 0.13 percentage point every week because of the impact of work left undone by 380,000 furloughed employees as well as work left aside by federal contractors, a White House official said.

The partial shutdown is the longest in US history and its effects have begun to reverberate across the country.

Longer lines have formed at some airports as more security screeners fail to show up for work while food and drug inspections have been curtailed and farmers, stung by recent trade spats, have been unable to receive federal aid.

Trump ran for office in 2016 on a promise to build a wall to stop illegal immigration and drug trafficking. He had toyed with the prospect of declaring a national emergency to circumvent Congress to secure the funding, but this week has backed off from that idea, which would attract a court challenge.

Democrats, who took over the US House of Representatives this month, have rejected the border wall but back other border security measures.

House Democrats have passed a number of bills to fund the roughly one-quarter of federal operations that have been closed, but Senate Majority Leader Mitch McConnell, a Republican, has said the chamber will not consider legislation that Trump will not sign into law.

McConnell, who has mainly stayed out of the public fray on the shutdown, on Tuesday accused Democrats of "acrobatic contortions" to avoid negotiating on the shutdown.

Representative Hakeem Jeffries, who heads the House Democratic Caucus, said it was up to individual lawmakers to decide whether to accept invitations from the White House to discuss the issue.

“The question that I think everyone can reasonably ask - Is he inviting people to 1600 Pennsylvania Avenue to really try to resolve this problem or to create a photo op so he can project a false sense of bipartisanship?” Jeffries told reporters.