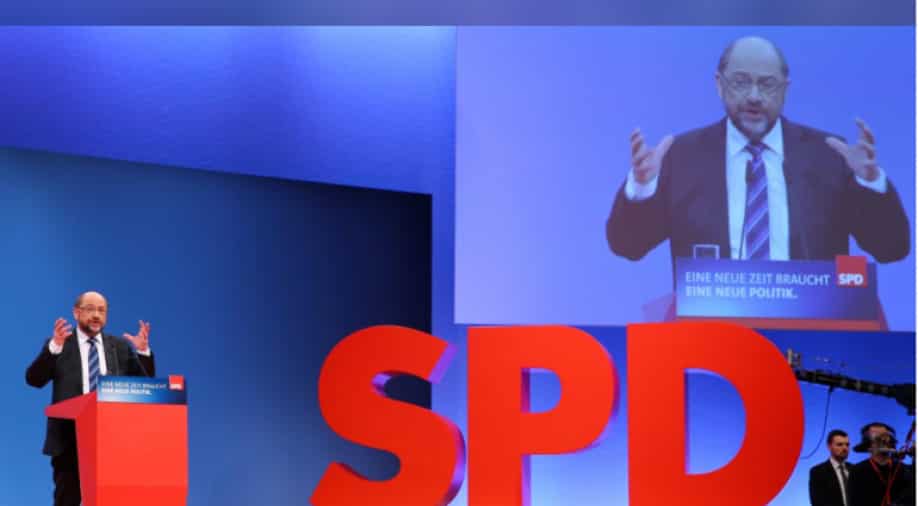 SPD delegates voted by 362 to 279, with one abstention, to press ahead with negotiations. The centre-left party's leaders had agreed a preliminary coalition blueprint with Merkel's conservative bloc earlier this month.

A recount was held after an initial show of hands was too close for the SPD official in charge of the count to call.

Just before delegates voted, SPD leader Martin Schulz made an impassioned plea for a 'yes', telling them their decision was being watched across Germany and Europe.

"One must not rule at any price," Schulz said. "But neither should one be prepared to pay any price to decline to rule."

Coalition talks are now expected to start this week, a step likely to be welcomed by Germany's partners in Europe, where Merkel has long played a leading role in economic and security affairs.

SPD party members will still get to vote on any final coalition deal that emerges, however.

Merkel and French President Emmanuel Macron said on Sunday they wanted to deepen bilateral cooperation and give the European Union a fresh push towards closer integration.

The SPD and conservative blocs, which both bled support to the far right in the Sept. 24 election, struck their preliminary deal after exploratory talks on renewing their ruling alliance that took office in 2013.

SPD critics, including the party's youth wing leader Kevin Kuehnert, argued the exploratory blueprint did not bear enough of the SPD's hallmarks.

The motion passed by delegates on Sunday opening the way for negotiations included language on obtaining improvements to the blueprint that would see conservative concessions on labour, health and migration policies.

"We will fight for further improvements in the coalition negotiations if we can continue the talks," Schulz earlier told the congress in Bonn, the capital of the former West Germany where late SPD chancellors Willy Brandt and Helmut Schmidt earned reputations as international statesmen.