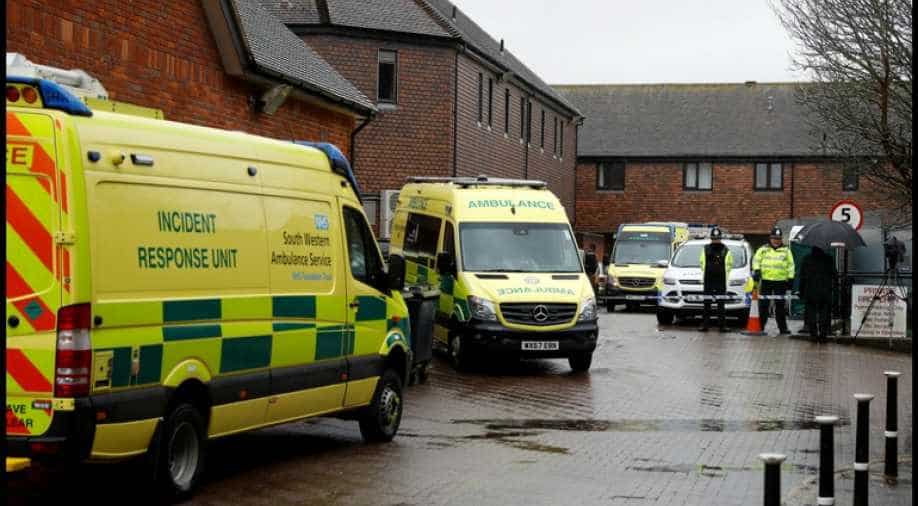 Two people found in a critical condition in southwestern Britain were exposed to the same nerve agent that poisoned an ex-Russian spy and his daughter earlier this year, police have said, although they have not established a link between the two incidents.

The poisoning in March of Sergei and Yulia Skripal caused a major diplomatic fallout with Russia.

Here is a summary of the main developments:

On March 4, 66-year-old former spy Sergei Skripal and his daughter Yulia, 33, are found unconscious, slumped on a bench in the city of Salisbury.

Three days later, with the Skripals in hospital in critical condition, police say the pair were poisoned with a highly-toxic nerve agent.

She says the military-grade nerve agent was identified as belonging to a group known as Novichok ("Newcomer"), developed by the Soviet government towards the end of the Cold War.

It suspends high-level diplomatic contact with Moscow and says it will keep royals at home during the 2018 football World Cup in Russia.

On&nbspMarch 17, Moscow says it will expel 23 British diplomats and halt the activities of the British Council, with Russian President Vladimir Putin denouncing the British accusations as "rubbish".

On&nbspMarch 20, experts from the Organisation for the Prohibition of Chemical Weapons (OPCW) take samples of the toxic substance.

Two days later, a police officer exposed at the same time as the Skripals is discharged from the hospital.

On&nbspMarch 26, a raft of Britain's allies announces they are expelling Russian diplomats in a coordinated action.

Washington says it is throwing out 60 Russian "spies" and closing the Russian consulate in Seattle.

By&nbspMarch 27, the number of Russian diplomats expelled from various countries and posts reaches 150.

Two days later, Russia announces the expulsion of 60 US diplomats and the closure of the US consulate in Saint Petersburg.

On&nbspMarch 30&nbspit says diplomats from another 23 countries, almost all EU members, will have to leave. Up to 50 more British diplomatic staff will be kicked out, it indicates the following day.

On&nbspApril 3, the British military facility analysing the nerve agent says it has "not verified the precise source".

The Kremlin demands an apology and on&nbspApril 4&nbspits foreign intelligence chief says the case is a "grotesque provocation... concocted by the British and American security services".

At an&nbspApril 5&nbspmeeting of the OPCW, a Russian bid to hold a joint enquiry with Britain into the poisoning fails, with London saying it would be "perverse".

At the UN Security Council, Russia again hotly denies responsibility. "It's some sort of theatre of the absurd," says it's ambassador.

On&nbspApril 6, the hospital treating Sergei Skripal says he is "improving rapidly" in the first official news of his condition.

On&nbspApril 10, officials say his daughter has been discharged.

Two days later, the OPCW confirms Britain's findings on the nerve agent but does not apportion blame.

In an&nbspApril 13&nbspletter, National Security Adviser Mark Sedwill says Britain has information that Russian intelligence had been spying on the Skripals for at least five years before the attack.

On&nbspApril 17, an operation to clean up affected areas of Salisbury begins with 190 specialist military personnel.

On July 4, police reveal that two people are in a critical condition in hospital after being found unconscious on June 30 at a house in the village of Amesbury, around 12 kilometres (eight miles), from Salisbury.

Later the same day they confirm that the man and woman have come into contact with Novichok. The situation is declared a "major incident" and counter-terrorism police take the lead in the investigation

Neil Basu, head of the counter-terrorism police, says: "The possibility that these two investigations might be linked is clearly a line of enquiry for us."