From London to Paris to New York, thousands converge for anti-Trump protests 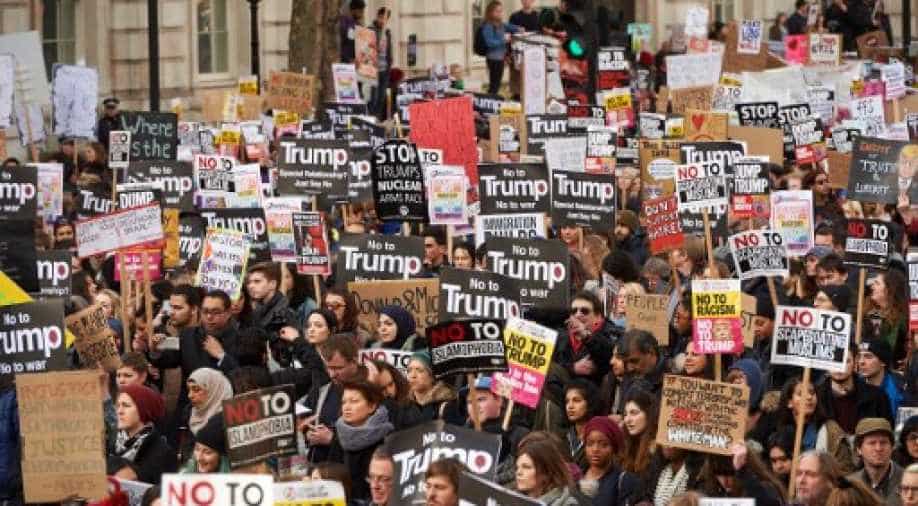 The biggest demonstration by far took place in the British capital, where an estimated 10,000 people turned out. In photo: People hold placards outside Downing Street. Photograph:( AFP )

From London and Paris to New York and Washington, thousands of people took to the streets Saturday in American and European cities to protest US President Donald Trump's travel ban, even as it was suspended by a federal judge.

The biggest demonstration by far took place in the British capital, where an estimated 10,000 people turned out, chanting "Theresa May: Shame on You" to denounce the British prime minister's support for the new US leader.

Brandishing placards declaring "No to scapegoating Muslims" and "Socialism not Trumpism," the protesters moved from the US embassy toward May's Downing Street office.

In an executive order issued on January 27, Trump slapped a blanket ban on nationals of seven mainly Muslim countries -- Iran, Iraq, Libya, Somalia, Sudan, Syria and Yemen -- barring their entry to the United States for 90 days.

Refugees were also barred from entry for 120 days, except those from Syria, who were blocked indefinitely.

However, on Friday, a US federal judge suspended the ban, a move which the Republican president -- who took office on January 20 -- condemned and vowed to fight.

On the other side of the Atlantic, about 3,000 people demonstrated in New York, Trump's home town where protests against the property magnate-turned-world leader are near-daily.

Activists and supporters gathered outside the historic Stonewall Inn, a landmark of the gay rights movement in New York's Greenwich Village, to show support for Muslims and others affected by Trump's immigration order.

In Washington, hundreds marched from the White House to Capitol Hill to show their solidarity.

"Donald, Donald can't you see, we don't want you in DC," chanted the demonstrators in the largely Democratic-leaning US capital.

Many waved homemade signs with slogans like "Love knows no borders" and "Will swap Trump for 1,000 refugees."

"I was born and raised here and for the first time in my life, I don't feel safe," said Abu Bakkar, 26, whose parents are originally from Pakistan.

The Department of Defense consultant said the new president "has revealed hate that's been underground for so long. He has divided one of the greatest countries in the world."

In Britain, more than 1.8 million people have signed a petition saying Trump should not be afforded a formal state visit because it would embarrass Queen Elizabeth II.

"We're going to bring this capital to a halt on the day he comes over. We are going to make it impossible for him to have a state visit," Chris Nineham, vice-chair of the Stop the War Coalition, told AFP.

The Guardian newspaper said around 10,000 people attended the London protest, while organizers claimed 40,000.

Elsewhere in Europe, about 1,000 people turned out in both Paris and Berlin, while smaller gatherings of several hundred people took place in provincial British cities including Manchester and Birmingham.

"We are here to say we don't accept hate," said 20-year-old American Michael Jacobs, co-organizer of the Paris rally, surrounded by signs saying "Refugees are welcome!"

In Berlin, protesters rallied in front of the Brandenburg Gate.

"I hope they will change something, but I am really disappointed," said Mahsa Zamani, a 26-year-old Iranian medical student who had been due to head to a Florida hospital for an internship.

"It is still discrimination, and I don't know if I really feel like going even if they are changing (the rules)."

On Saturday evening, hundreds of protesters were planning to march near Trump's Mar-a-Lago club and vacation home in Florida, though police were expected to keep them far from the property.