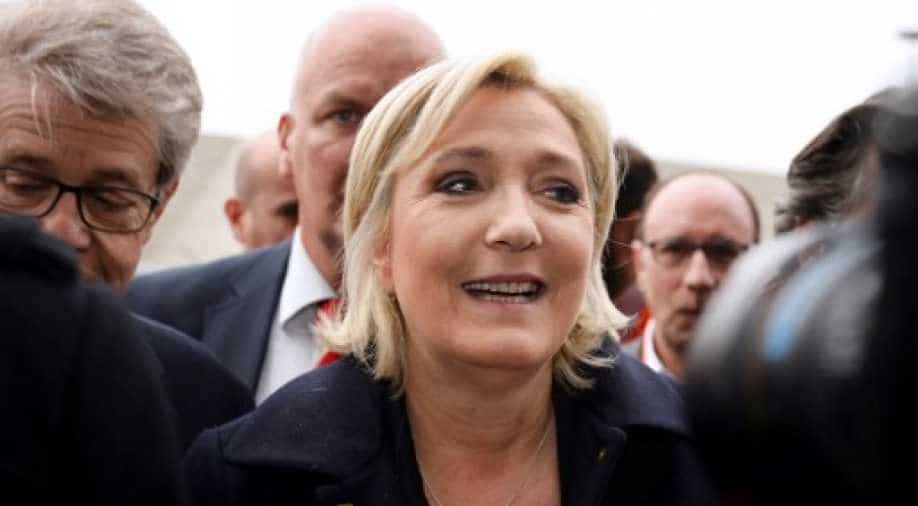 Marine Le Pen is expected to lose in the May 7 presidential runoff but repeated terror attacks and a surge in populism in France have handed her an outside shot of securing a shock win. Photograph:( AFP )

France's far-right leader Marine Le Pen launched her presidential campain on Sunday by promising to reject the tenets of mainstream politics and quit the eurozone.

Le Pen has also vowed to impose heavier taxes on foreign workers and remove red-tape in small firms, themes that has catapulted the eurosceptic as one of the likely winners in this year's elections in France.

Although polls show her in second place behind the centrist former banker Emmanuel Macron, the recent attack on a soldier near Louvre Museum has fuelled her presidential bid as one of her 144 "commitments" to the nation is also about arming the police "massively" to thwart terrorist action.

Le Pen, trotting her trump card of exiting Europe, said that she would hold a referendum if other European partners refuse to agree with her decision of quitting the eurozone.

She spoke about seeing her country not lose its identity by the influx of immigrants and refugees, and a state with its own borders.

Le Pen has previously spoken about her consternation related to immigrants and refugess, saying their presence was not only a dilution of French values but also risked the possibility of terror attacks in the country.

The 48-year-old leader of the National Front (FN) favours an overhauled European Union without a single currency.

Le Pen has also benefitted from the scandal that has rocked her conservative rival Francois Fillon, who was widely tipped to win the May 7 runoffs.

Fillon has been swamped with allegations about his wife Penelope earning more than 800,000 euros ($860,000) as a parliamentary aide without apparently ever working in the National Assembly building.

Le Pen hopes to capitalise on the same rejection of mainstream politics that helped the Brexit camp win in Britain and swept Donald Trump to the US presidency.

She has worked to rid the FN of its more extremist, anti-Semitic fringe since taking over from her father Jean-Marie Le Pen, who has repeatedly referred to the Nazi gas chambers as a "detail" of history.