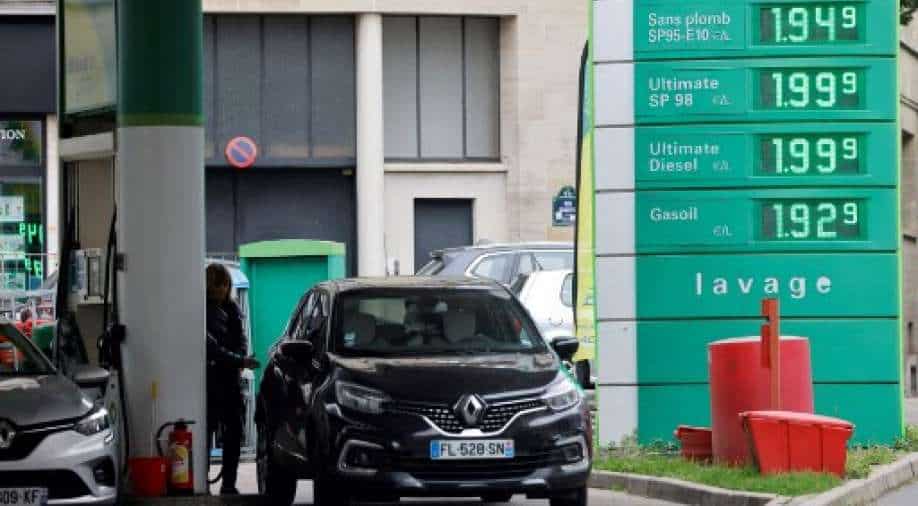 The payout comes just before the three-year anniversary of the anti-government 'yellow vests' protests Photograph:( AFP )

Amid record fuel prices, France has announced to provide €100 “inflation bonus” to the people on low to middle incomes and promised to freeze petrol prices in a bid to contain growing discontent over rising prices and an increase in living costs.

“We obviously want to protect French people, above all those who work hard and are taking the full force of these price rises,” said the government spokesperson, Gabriel Attal.

The announcement comes in the backdrop of impending presidential elections which is about to take place in six months. Experts argue that President Emmanuel Macron is seeking to limit damage to his economic record from spiralling energy prices.

The country’s prime minister, Jean Castex, said the one-off “inflation payout” would be given to all those earning less than €2,000 net a month, including private and public sector workers, the self-employed, job seekers and retired people. Distribution of the money would begin at the end of December.

Castex said it would affect about 38 million people, and petrol prices would also be “frozen for the whole of 2022”.

He added that the €2000 threshold would be calculated per person, not per household, and that the government would stick to its 2022 budget deficit target of 5 per cent of GDP by compensating the payout with new income and budget savings.

As petrol prices steadily climbed in recent weeks, the government faced growing pressure to cut taxes paid at the pump, which can amount to up to 60 per cent of what drivers pay.

Also read | From egg, and slap, to Macron to flying shoe at George W Bush — When world leaders were at the receiving end

The payout comes just before the three-year anniversary of the anti-government gilets jaunes or yellow vests protests that began in autumn 2018 as a motorists’ revolt against fuel tax.

Last weekend, small protests were held by gilets jaunes on roundabouts in some rural areas and small towns. The government is keen to stave off this escalating into fuel blockades or growing street marches.

Finance minister Bruno Le Maire argued that step would be costly to public finances and would also amount to a subsidy for fossil fuels at a time when the government was trying to wean the economy off them.