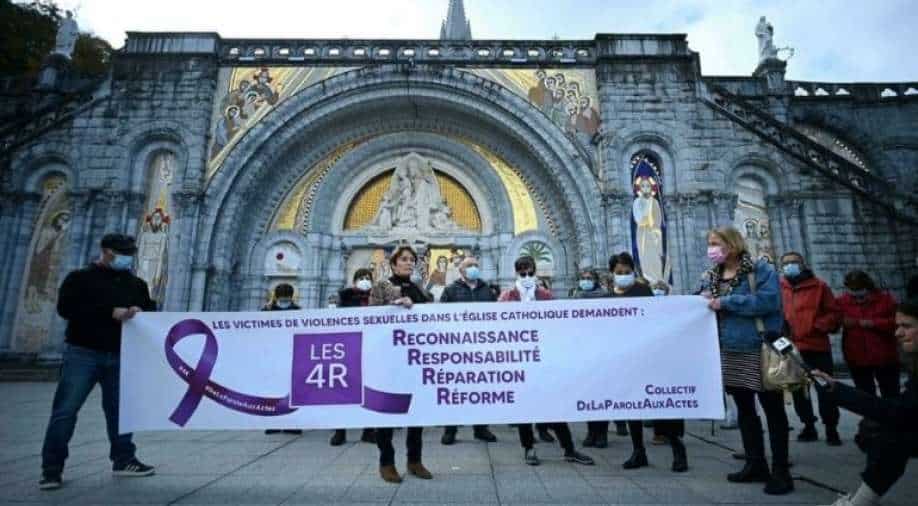 Members of the 'From words to action' collective hold a banner reading 'Victims of sexual violence in the Catholic Church demand: recognition, responsibility, reparation, reform' near the Notre-Dame-du-Rosaire basilica, in Lourdes, France Photograph:( AFP )

Critics accuse Francis of responding too slowly to the sex abuse scandals, of failing to empathise with victims and of blindly believing the word of his fellow clergy

France's Catholic Church has raised over $22 million as compensation for victims of child sexual abuse by clergy.

The dioceses had been facing intense pressure for turning a blind eye to the ''scourge'' for too long.

A major investigation had revealed that French clergy sexually abused more than 200,000 children over the past 70 years.

The church had shown "deep, total and even cruel indifference for years," protecting itself rather than the victims of what was systemic abuse, said Jean-Marc Sauve, head of the commission that compiled the report.

An initial five million euros will be set aside for compensation claims being studied by an independent panel set up in the wake of the damning abuse report.

Gilles Vermot-Desroches, the president of the Selam fund, said ''It's a first step. The Church has followed through on its commitment.''

The head of the French conference of bishops, Eric de Moulins-Beaufort, said the church was shamed. Calling the report a "bombshell", he asked for forgiveness and promised to act.

The head of the Bishops' Conference of France (CEF) has said the Church will sell off real estate and tap its financial holdings, and possibly take out bank loans to raise the money.

Critics accuse Francis of responding too slowly to the sex abuse scandals, of failing to empathise with victims and of blindly believing the word of his fellow clergy.

The revelations, which showed the problem in France was more widespread than previously thought, were the latest to rock the Roman Catholic Church, after a series of sexual abuse scandals around the world, often involving children.

The French findings came a year after Britain said the Catholic Church had received more than 900 complaints involving over 3,000 instances of child sex abuse in England and Wales between 1970 and 2015, and that there had been more than 100 reported allegations a year since 2016.