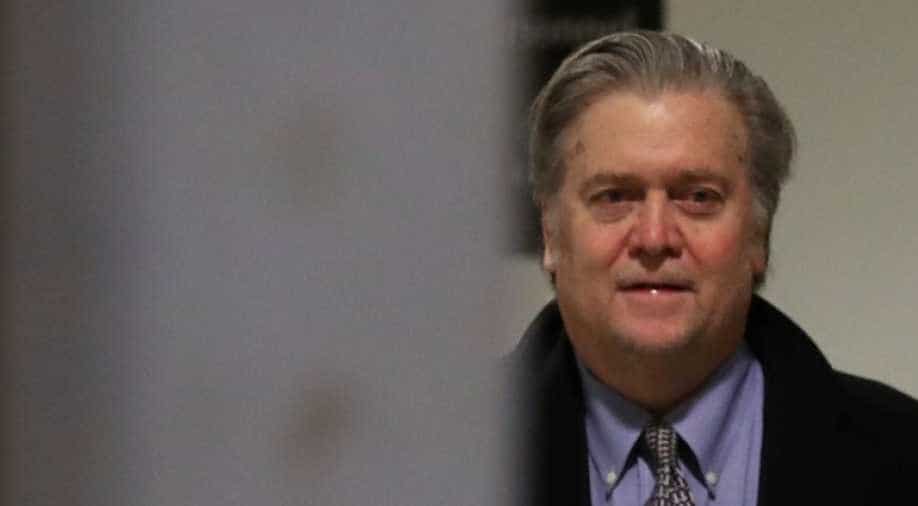 President Donald Trump's former chief strategist Steve Bannon declined on Tuesday to comply with a subpoena ordering him to answer questions from a House intelligence panel about his time at the White House as part of its investigation into allegations of Russian interference in the US election.

After Bannon initially refused to answer questions about the matter, Devin Nunes, the committee's Republican chairman, authorized a subpoena during the meeting to press Bannon to respond.

Even then, Bannon refused to answer questions, Representative Adam Schiff, the top Democrat on the committee, told reporters.

Separately, the New York Times reported that Bannon had been subpoenaed by Special Counsel Robert Mueller to testify before a grand jury in a probe of alleged ties between Russia and Trump's 2016 presidential campaign, on Tuesday.

It was the first time Mueller is known to have used a subpoena against a member of Trump's inner circle, the Times said. It cited a person with direct knowledge of the matter.

A spokesman for Mueller's office declined comment. Bill Burck, a lawyer for Bannon, could not immediately be reached for comment.

The reported subpoena of Bannon does not mean he is a target of Mueller's criminal investigation.

Bannon, a champion of Trump's "America First" agenda, was among the Republican's closest aides during the 2016 election campaign, the presidential transition and his first months in office.

But the pair had a bitter public falling out over comments Bannon made to author Michael Wolff for his recent book "Fire and Fury: Inside the Trump White House."

In the book, Bannon is quoted as describing a June 2016 meeting between Trump associates, including the president`s son Donald Trump Jr., his son-in-law, Jared Kushner, and a Russian lawyer, as "treasonous" and "unpatriotic."

Russia has denied meddling in the election and Trump has denied any collusion between his campaign and Moscow.

Bannon was fired by the White House in August and returned to the right-wing news website Breitbart News. He continued to speak with Trump and tried to promote the president's agenda.

Bannon spent hours on Tuesday meeting behind closed doors with members of the House of Representatives Intelligence Committee. He was the latest high-profile figure to appear before the panel as part of its investigation into allegations of Russian interference in the US election.

"We expect to have Mr Bannon back in, we hope very soon, with a different position by the White House," Schiff said.

Schiff told MSNBC later that Bannon had refused to answer questions about conversations held both during his time at the White House and during the transition between the election and Trump's inauguration.

"This is the broadest effort to effectively gag a witness that we've seen," he said.

Asked if the White House had told Bannon not to answer certain questions, spokeswoman Sarah Sanders said: "As with all congressional activities touching upon the White House, Congress must consult with the White House prior to obtaining confidential material."

"We've been cooperating fully with these ongoing investigations and encourage the committees to work with us to find an appropriate accommodation in order to ensure Congress obtains information necessary to its legitimate interests," she said.

Mueller's subpoena, which was issued last week, could be a pressure tactic to induce Bannon to cooperate fully with his investigation.

Attorney Renato Mariotti, a former federal prosecutor, said the most likely reason for a Mueller subpoena of Bannon was that "he thought having an attorney present and giving Bannon a more relaxed setting would not yield the same testimony as if he got him in the grand jury room with no attorney there and a more adversarial style of questioning."

A witness is not permitted to bring an attorney into a federal grand jury proceeding, but can step outside to consult with counsel.