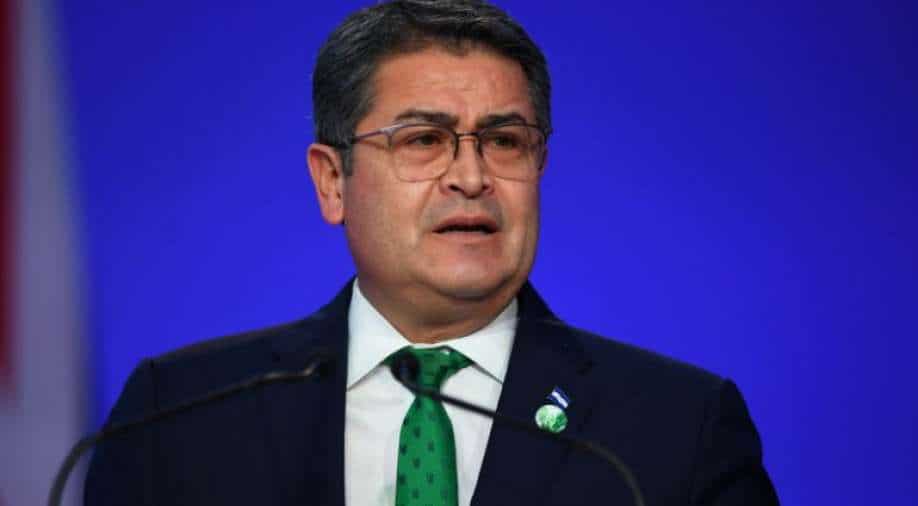 Lawyers for Honduran ex-president Juan Orlando Hernandez, wanted on drug trafficking charges in the United States, asked Monday that he be granted house arrest while the extradition case against him proceeds, a spokesperson said.

The 53-year-old is accused of having facilitated the smuggling of some 500 tons of drugs -- mainly from Colombia and Venezuela -- to the United States via Honduras since 2004.

In turn, he allegedly received "millions of dollars in bribes... from multiple narcotrafficking organizations in Honduras, Mexico and other places," according to a document from the US embassy in Tegucigalpa.

Washington requested on February 14 he be extradited to the United States to face charges.

He was arrested and placed in prison at the Special Forces headquarters, in the east of the capital Tegucigalpa.

A judge ruled Hernandez would stay there in preventative detention until a second hearing next month.

The court had said on Twitter the judge had agreed to hear an appeal from the defense team to revoke Hernandez's preventative detention.

The appeal has to be approved by all 15 justices of the Supreme Court.

In power for eight years until January 27, when leftist Xiomara Castro was sworn in as Honduras's first woman president, Hernandez was taken from his home in Tegucigalpa by Honduran police acting in coordination with US agencies, including the Drug Enforcement Administration.

While the right-wing politician had portrayed himself as an ally of the US war on drugs during his tenure, traffickers caught in the United States claimed to have paid bribes to the president's inner circle.

Hernandez's brother, former Honduran congressman Tony Hernandez, was given a life sentence in the United States in March 2021 for drug trafficking.

US Secretary of State Antony Blinken said on February 7 that "according to multiple, credible media reports," Hernandez "has engaged in significant corruption by committing or facilitating acts of corruption and narco-trafficking and using the proceeds of illicit activity to facilitate political campaigns."

Hernandez denies the claims, which he said were part of a revenge plot by traffickers that his government had captured or extradited to the United States.

His wife, Ana Garcia, appeared Monday before the National Commission on Human Rights to protest against the way her husband was arrested.

"You transmitted all the images of the humiliating and degrading way in which my husband was treated," she told reporters. "The authorities who allowed the use of shackles and chains... exhibited him publicly as a trophy."

But deputy security minister Julissa Villanueva said she had checked Hernandez's prison conditions Monday and did not find "any violation of human rights, cruel or degrading treatment."