Fighting IS: The state of the Mosul offensive 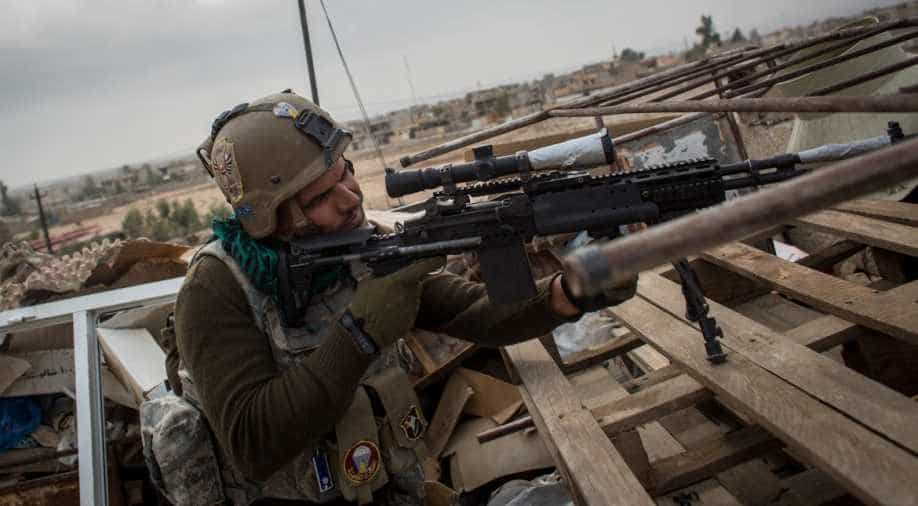 A sniper from the Iraqi Army Armoured Ninth Division looks for ISIL snipers across the frontline from a rooftop in the Entisar neighborhood on November 15, 2016 in Mosul, Iraq. November 15. Photograph:( Reuters )

Iraqi Brigadier General Saad Maan stated on November 15 that the country’s army has now secured a large area of eastern Mosul, the de facto capital city of the Islamic State in Iraq. During a press conference in the Qayyarah base, the main hub for the operations to reconquer the city, he said "more than a third of this (eastern) side has been liberated”.

US Navy Captain Jeff Davis told reporters at the Pentagon that despite the undeniable success in the  operations, the battle is nowhere near over. "It may be one-third cleared in terms of acreage, but it's not one-third clear in terms of challenge and task ahead," he said. "As they get closer to the centre of the city, it's going to get more dense and more fierce in the fighting."

The Tigris river flows within the city, serving as the dividing line between the city's eastern and western side, the first being slightly bigger. In order to gain control over Mosul, it is primarily important to first defeat the Islamic State on the eastern side of the city and control the main five bridges crossing the river in order to isolate the remaining terrorists.

The Mosul offensive began on October 17 and succeeded in clearing the majority of the villages surrounding the city from Islamic State presence. Peshmergas, the Kurdistan regional’s army, contributed significantly to the operations, attacking and defeating the Islamic State in their northern and northeastern territories.

After the last offensive against the town of Bashiqa, Peshmergas are likely to stop their operation. According to the agreement done with the Iraqi government, they were not supposed to enter the city of Mosul, their part of the war has now come to an end and they will secure and patrol all the reconquered areas.

The many civilians still within the city slow the offensive, especially airstrikes. The Islamic State often choose normal civilian houses as its bases, and it is therefore difficult to understand how to proceed without killing innocent people.

According to Iraq's military establishment the battle will proceed as scheduled, but they make no mystery about the many difficulties they face. The Islamic State is organising a strategic resistance, using the city’s geography in their favour. Mosul, like many Arab towns, has congested neighbourhoods and many small lanes; it is easy to end up caught in ambushes. It is also difficult to enter the city with tanks. The only way to advance is in limited convoys of armoured vehicles slowly driving in the streets under heavy gunfire, mortar fire, suicide attacks and Improvised Explosive Devices. The Islamic State has also built a sophisticated and wide network of underground tunnels which allows them to move unseen all around the neighbourhood they control.

Brigadier General Saad Maan said that, so far, 955 IS terrorists have been killed and 108 arrested during the last phase of the offensive. There are no official figures about the casualties among the soldiers. Hospitals close to the city are receiving dozens of patients with gunfire injuries everyday, but there is no official figure regarding civilians killed during the operations.

The many civilians still within the city slow the offensive, especially airstrikes. The Islamic State often choose normal civilian houses as its bases and it is therefore difficult to understand how to proceed without killing innocent people.

It is very difficult to gather intelligence insights from Mosul since IS heavily controls all communications, and punishes with cruel death whoever is found guilty of any suspicious activity. This is the fate that befell the more than hundred persons found in a mass grave in the city of Hamam al-Alil, who were mostly policemen and people who provided useful information to the Iraqi army about IS movements in the area.

Many civilians are leaving the reconquered neighbourhood of the cities to reach the camps set up by the many international non-governmental organisations (NGOs) active in the country. According to data released by the International Organisation for Migration (IOM), the number of individuals who fled Mosul alone is 48,750. More than 56,000 are believed to have left their houses since the beginning of the operations, men, women and children.