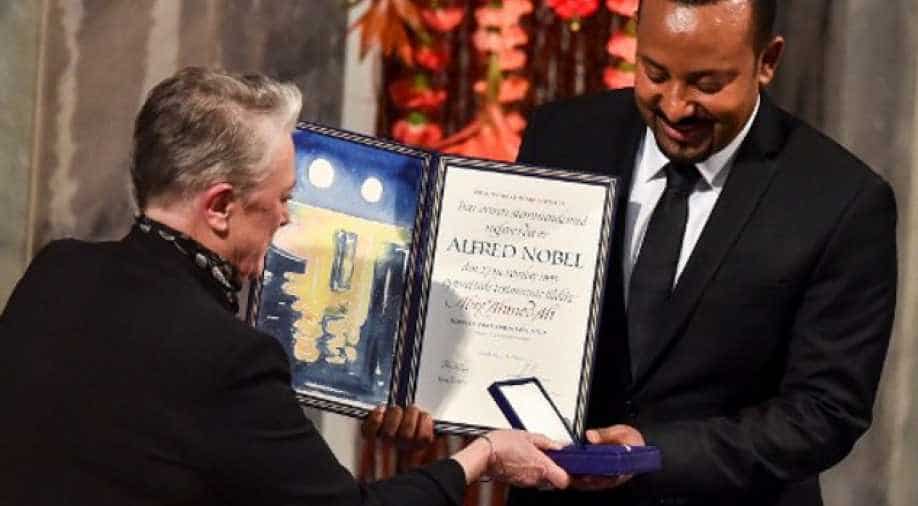 The Nobel committee today officially handed over the coveted peace prize to Ethiopian Prime Minister Abiy Ahmed at a glittering ceremony in Oslo.

"I accept this award on behalf of Ethiopians and Eritreans, especially those who made the ultimate sacrifice in the cause of peace," Abiy said after the ceremony.

"Likewise, I accept this award on behalf of my partner, and comrade-in-peace, President Isaias Afwerki, whose goodwill, trust and commitment were vital in ending the two-decade deadlock between our countries," he added.

On July 9, 2018, after meeting in Eritrea's capital Asmara, Abiy and Eritrean President Isaias Afwerki had announced the formal ending of the 20-year-old stalemate between their countries involved in a border conflict.

Every year the Nobel Prizes are presented on December 10, in memory of Alfred Nobel who passed away on this day in 1896. The Nobel Peace Prize consists of a diploma, a gold medal and a cheque of $945,000.

PM Abiy Ahmed is the youngest leader at 43 to recieve the Nobel Prize. However, Abiy Ahmed Ali refused to speak to the media cancelling this years Nobel Peace Prize press conference.

Ethiopia and Eritrea have disagreed over their lengthy border since 1993, the year Eritrea became an independent state, but the dispute turned violent on May 6, 1998 with each side accusing the other of invading.